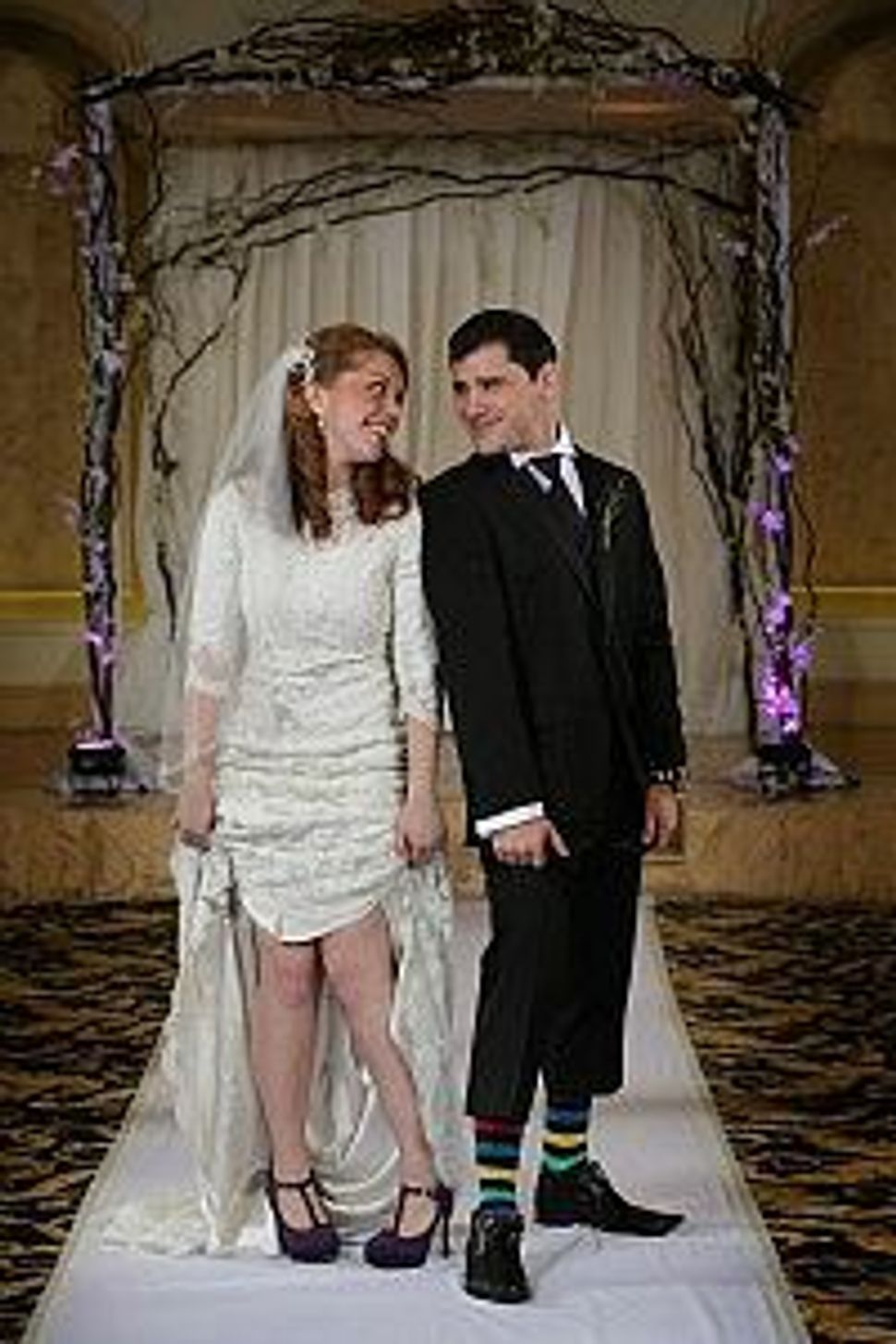 Like most women, I found engagement to be a journey. Unlike most women, I decided to share that journey with the readers of the Forward. Over the latter part of my six-month engagement to Jeremy, I blogged for the Sisterhood (using my maiden name, Lampert) in a series called “Feminist, Orthodox and Engaged.” I wrote about going on birth control in advance of my wedding, getting genetic tests with Jeremy to ensure that our future children weren’t at risk for disease and my excitement at getting to live with Jeremy for the first time after our wedding.

For the most part, I loved being engaged. I loved the excitement my readers seemed to share over my impending nuptials. I loved being able to use the word “nuptials.”

But it was also stressful. I knew I wanted to spend forever with my fiancé, but because of practicalities like wedding rings and marriage documents, forever couldn’t start just yet. It was like waiting in line outside to get into a concert you’ve paid for: It’s thrilling, and the anticipation is building, but the fun hasn’t really begun. I guess what I’m saying is, marriage is like seeing Nicki Minaj live, every day. Minus the loud crowds. (My guilty pleasure music secret had to come out sooner or later.)

Then again, I’ve only been married for a month now. I’m only just starting out on a path that I hope will end up like my grandparents’ marriages — five or more decades together, learning and living and growing and loving. This first year, that so-called honeymoon phase, will be its own journey, one that I’m excited to again have the opportunity to share here in the Forward’s new blog, Just Married. It’s a journey that had its birth way back when Jeremy and I met, and that truly began on the day of our wedding.

That big day, the one we’d been planning and talking about and thinking about for six months, was one I didn’t share with readers. Some highlights: Running into the hall in my jeans, with my makeup, hair and veil already in place. Spotting Jeremy and exclaiming “Husband!” and jumping into his arms. His expression when he saw me in my gown for the first time. Seeing my friends gathered to share in our excitement and love. Waiting for Jeremy to be danced out to me during the bedekin, a ritual in which the groom lifts the bride’s veil, thus preparing the couple for the chuppah. (I was bouncing up and down in my seat, demanding, “Where is he? Where is he?”) Walking down the aisle, smiling so hard I had to stop because it was hurting my jaw. Dancing out to “Gangnam Style” with him. Dancing with everyone. A break for a bite — literally — and more dancing with everyone. Finally, our first dance. Making mistakes in our dance because we were so busy smiling at each other that we stopped focusing on our steps. My brother’s toast. His sister’s toast. Giving each other foot massages in the limo (which, by the way, my brother-in-law had decorated with the words “We are so in love that it’s gross”). Getting to our hotel. Sleeping.

So what is it like to be married? Let me put it in the words of a wise married friend of mine: Marriage is like having a sleepover party with your best friend, every night. So all you want to do is watch movies and eat all night. This might not be the most romantic description of married life, but so far it fits the bill perfectly. It makes for some exceptional couch-potato living, and it’s wonderful for the figure.

Despite having committed ourselves to each other for all eternity and so on, I’m still surprised on occasion to look across the couch where our bums have etched permanent grooves and see my best friend sitting there. It’s still a surprise to discover that he considers me his best friend, and that such things as Prince Charmings do exist — even if mine happens not to have a white horse and actually hates horseback riding.

I wouldn’t say that everything has ended with “happily ever after,” though, because that’s just silly. First of all, nothing’s ended — in fact, everything has just begun. But even more important, marriage is going to be hard work. It will involve navigating this new world together, finding out even more about each other and even coming to love each other more. But that’s not easy. It’s not easy to take two full lives and blend them together into an entirely new one. It’s not easy, but it is rewarding and exciting.

And so I begin this new blog, an exploration of the beginnings of married life, with that added little twist of being Modern Orthodox and relatively young (I’m 23 and Jeremy is 24). It will be an exploration of firsts — first holidays together, first vacations together — and of the year where things will change completely as we begin to build our lives around each other. I’ll tell you about my first trip to the mikveh, and how I felt lighting Shabbat candles for the first time, sensing that I was joining a strong line of Jewish women at last. With my readers, I will explore the ups and downs and sideways turns of married life. If you thought engaged life was interesting — well, be prepared for a fun ride. I know I am.

Simi Lichtman is a graduate of Stern College for Women and the Associate Editor of New Voices Magazine. Her articles have been published in Tablet, The Jewish Week, Huffington Post, and the Beacon, which she founded.