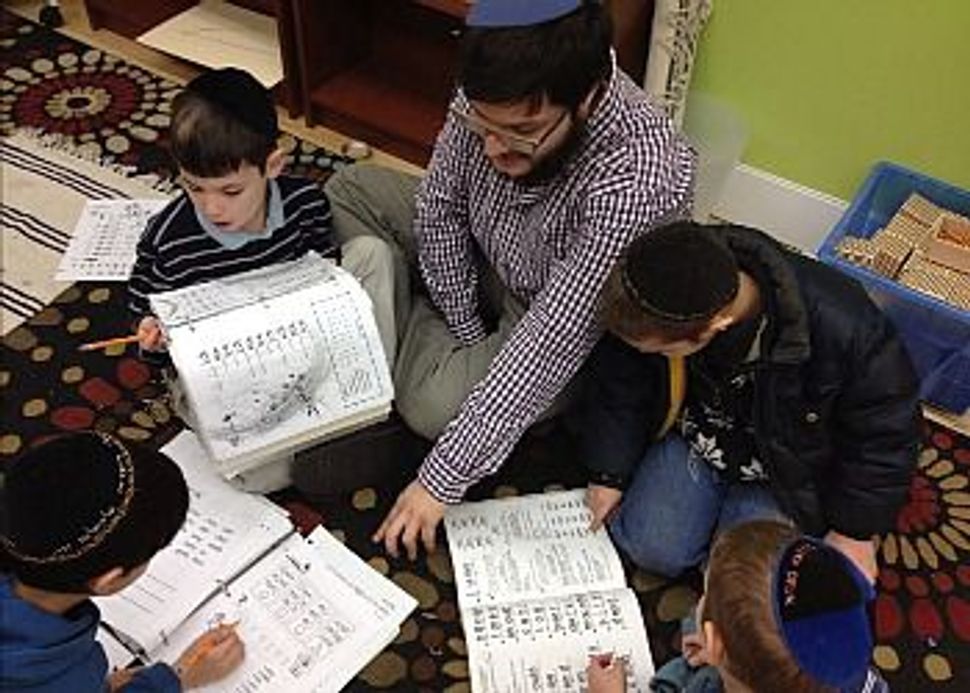 Students at the Lamplighters Yeshivah in Crown Heights. Image by Lamplights Yeshiva staff

There’s a new Hasidic Montessori school for elementary boys in Crown Heights and creative women are behind the change.

Lamplighters Yeshivah opened two years ago, driven by a group of Crown Heights parents who “allowed themselves to dream; to envision a new holistic educational experience for their children,” the school’s website says.

Lamplighters is a small school of 40 students still in its early seedlings, yet it has tripled enrollment since its inception in 2010. Although the school includes a mixed-gender preschool, the revolution lies in its boys’ lower elementary class, which is challenging the mainstream institutional approach. The curriculum includes child-directed learning centers, art and Montessori materials to integrate Torah and secular subjects. It also caters to parents and children who are not satisfied with the status quo. (The other Hasidic boys’ schools in Crown Heights do not teach any English subjects, at least not until fourth grade.)

Lamplighters celebrated its innovative approach at a December event for 400 women called “In the Glow: Basking in the Light of Creative Jewish Women” that featured Hasidic women artists, performers and entrepreneurs, plus comedian Yael Hanover as emcee.

“The event ties into the mission of the school that every child is unique and can be successful,” executive director Yocheved Sidof told the Sisterhood. “Women are creating an environment where we nurture, celebrate and support each other.”

Vendors filled Beth Rivka’s Roza Hall with everything from chic Hasidic fashion, jewelry, art and photography to organic food, cosmetics, wellness and fitness displays. While crowds of girls and women milled about sampling and shopping, about ten women prepared backstage for individual performances of dance and music that lasted over two hours.

These artists are part of a burgeoning art scene in Crown Heights, particularly for women, who according to Jewish laws of modesty only perform for other women and until recently have not had much opportunity to showcase their talent. Within the last few months, new venues and groups have formed for creative types in Brooklyn’s Chabad enclave. On Sukkoth last October, a local pop-up gallery featuring fresh art from both genders hosted open mikes for Crown Heights men and women. The event was organized by the Creative Soul, a new group of Hasidic artists whose founder, Yitzchok Moully, is a Hasidic Jewish pop artist himself.

Then came Mikimi, a Crown Heights organization started by Menachem Reich and the Hasidic blogger known as “Pop Chassid,” Elad Nehorai. Devoted to creativity, they organize events for artists and performers with Jewish values. On a recent Saturday night at an open mike Mikimi held in a Crown Heights synagogue, men waited outside as women performed inside. Only when women left the stage did men enter; women, however, stayed to watch the men perform, which is allowed according to Jewish law (with a partition separating the genders). The group also hosts separate events for men and women at its new designated space in the neighborhood.

Singer Esther Freeman, who has a son at Lamplighters and bears a striking resemblance to musical diva Barbara Streisand, performed despite feeling sick because, she said, she believes so much in the school.

“When the students learn secular and Jewish studies they’re learning math in a Jewish way,” Freeman told the Sisterhood. “Through counting Chanukah candles and through the Parshah (weekly Torah portion). All studies are connected, you just have to find the Jewish approach. Then the child feels he has a well-rounded view of the world and doesn’t feel he needs to search the secular world.”

The name Lamplighters was chosen for the school based on the Hasidic belief that each person can transform darkness into light.

“You can only light the world if you’re in tune to your own individuality and gifts,” Sidof says. “Then kids can figure out what they’re good at, what they love to learn. Every person has their own unique glow, their imprint on the world.”