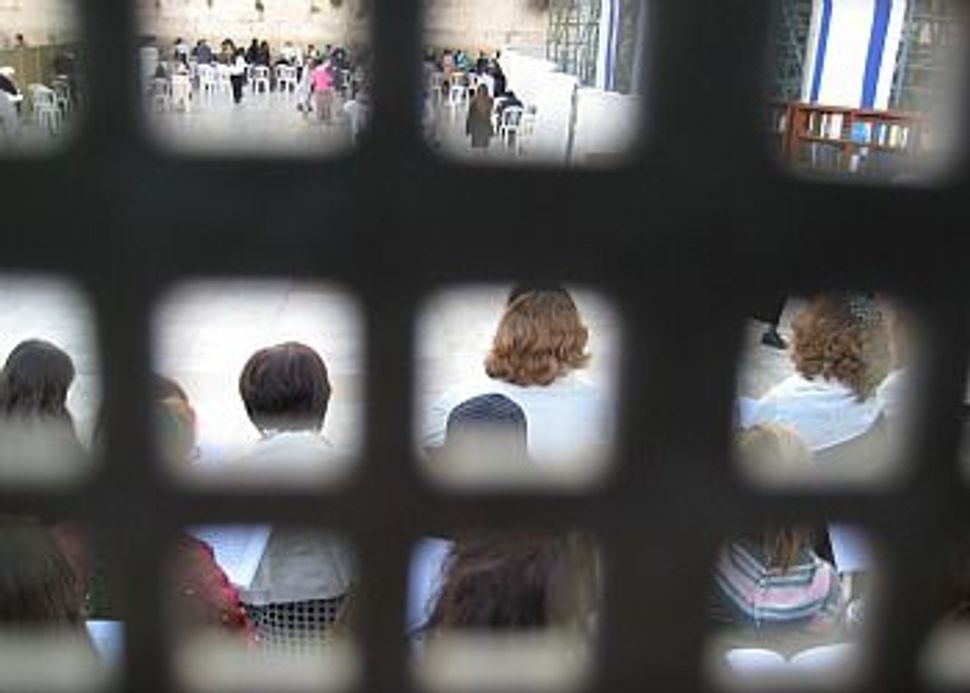 A view of Women of the Wall from the Kotel Plaza. Image by Silversteinb/Wikimedia Commons

As if things weren’t difficult enough for women who want to pray or be in any way connected with their loved ones’ bar mitzvahs at the Western Wall, Israel’s outgoing Ashkenazi chief rabbi, Yona Metzger, has proposed a mechitzah with one-way glass.

The current mechitzah at the Kotel is, I would guess, between eight and nine feet tall. A new mechitzah would presumably reach far higher. The current height makes it possible, if you are there to celebrate a bar mitzvah, to stand on one of the chairs on the women’s side and look over the top (it helps to be tall) and in this imperfect way be connected, however slightly, to the simcha. Which is exactly the problem, Rabbi Metzger says.

According to a report in the Yeshiva World News, “this he explains does compromise tznius at the Kosel. This is especially true when there is a simcha, such as a bar mitzvah when women wish to see the chosson bar mitzvah.”

I would really like to hear some prominent Orthodox rabbi somewhere, just once, say that men should work to keep their focus on their own tefillot rather than in some way blame women for being immodest — in this case, for wanting to be connected to a loved one’s bar mitzvah.

A taller mechitzah with one-way glass might prevent these easily distracted men from glimpsing a woman’s face and (shudder) possibly even fully-clothed shoulders over the top of the mechitzah. But the dimness of this glass would also make it more difficult for women to see what is happening on the men’s side. And it would certainly more fully segregate women, boxing them into a space that may serve men’s interests but certainly does nothing to enhance women’s experiences.

I’ve been in the women’s section of the synagogue at 770 Eastern Parkway, the headquarters shul for the Lubavitch movement. Though the women’s section is a balcony high up over the men’s floor, it has one-way glass allowing women to look downstairs while preventing the men from seeing in. When the women’s section is full, as on holidays, it is positively claustrophobic. To be sure the experience is somewhat different than it would be at the Kotel, where there is no roof. But it would likely create some of the same sense of being further hemmed in.

A few summers back, I attended the bar mitzvah of a friend’s son at the Kotel. Happy as I was to celebrate this milestone with them, it was an experience I hope never to repeat. We got there early, so the rabbi paid to coordinate the event could score a table close to the mechitzah, in proximity to the boy’s mother and sister. While they began the service on the men’s side, over on the women’s side we stood on chairs and craned to look over the mechitzah, apart from but hoping to at least witness the bar mitzvah. That is, until a large swarm of French women came for their own bar mitzvah and literally pushed us off our perches.

Had there been a taller mechitzah with one-way glass, we surely would have felt even more disconnected from the bar mitzvah.

The Yeshiva World News article doesn’t say how tall a mechitzah Rabbi Metzger would like. Perhaps he thinks it ought to be as high as the Kotel itself, which at the Western Wall Plaza rises approximately 62 feet according to the Western Wall Heritage Foundation, whose chairman, Rabbi Shmuel Rabinovitch, is the kotel’s chief rabbi.

He controls policy there — including the policy prohibiting women from wearing tallitot or tefillin at the Kotel even it is their regular practice, and has the religious articles confiscated at the entrance to the Kotel plaza. It was at Rabbi Rabinovitch’s behest that women have been arrested in recent months for wearing tallit and leading prayers out loud.

The Western Wall Heritage Foundation’s website has a section on “Bar/Bat Mitzvah.” Tellingly, perhaps, the drop down menu includes only information relating to celebrating a bar mitzvah.

The Western Wall, to which Jews everywhere turn in prayer, belongs to us all.

Would that it were really true.