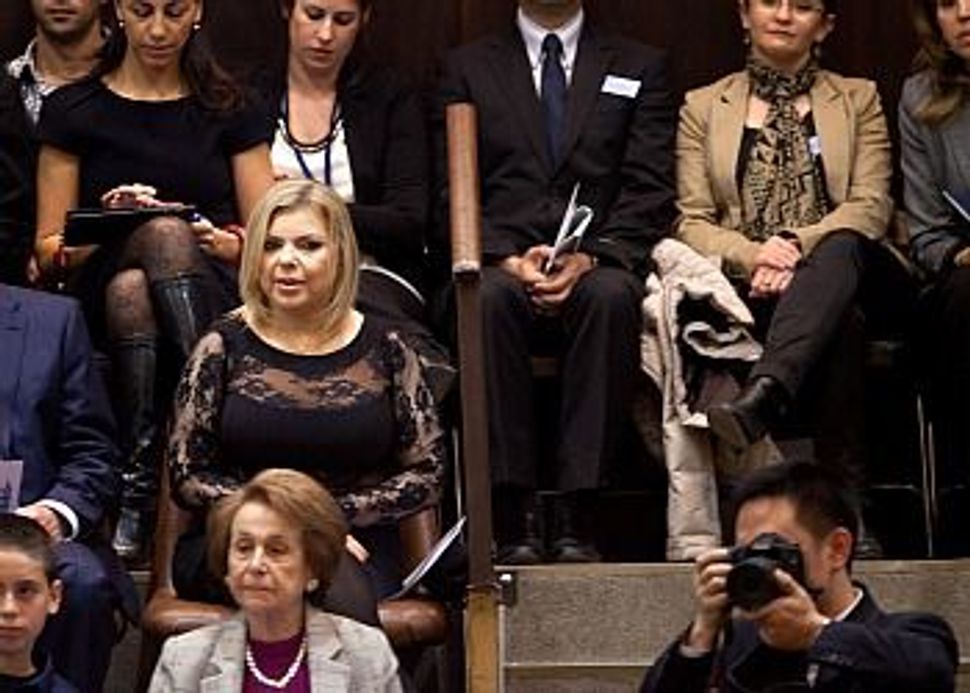 While we all love a first lady who can part with convention, it gets a little scary when the shift in style appears to be inspired by the Real Housewives of New Jersey.

In the United States we have had some great sartorially rebellious first-wives, namely Michelle Obama and Jackie O, both of whom redefined femininity for a generation. Jackie O did it with her A-line dresses, pill box hats and pastel suits. And Michelle Obama has inspired many women with her bright colors, strong arms, and mixing of couture with J. Crew. These first ladies achieved fashion icon status because of they way they come off as elegant and graceful while also appearing modern and relevant.

But Netanyahu’s choice says something else altogether. When you get past its immediate message, which is “look at my breasts” (I feel terrible saying this about the Prime Minister’s wife, but really, what else is there to say?), you are left only to ponder whether she can actually move in it, and, if she can, whether she made it close enough to the mirror to see that she looks more like a caricature of a cougar in one of the “American Pie” movies than a cool and classy first lady à la Michelle and Jackie.

So, no, the Sisterhood fashion police does not approve. But before I completely write this off as a purely regrettable fashion faux pas I would like to highlight two silver linings.

First, we could read this choice as a bold, political move in a country where women’s faces in advertising are considered scandalous because certain religious Jews just can’t handle the sight of women’s flesh, even if it is just their heads. Second, this dress, with all of the awful judgement behind it, shows that Sara Netanyahu is not being bossed around by some strategists and managers. Nope, this is a woman who clearly makes her own choices, and stands by them, or, well, in them, for better or for worse.