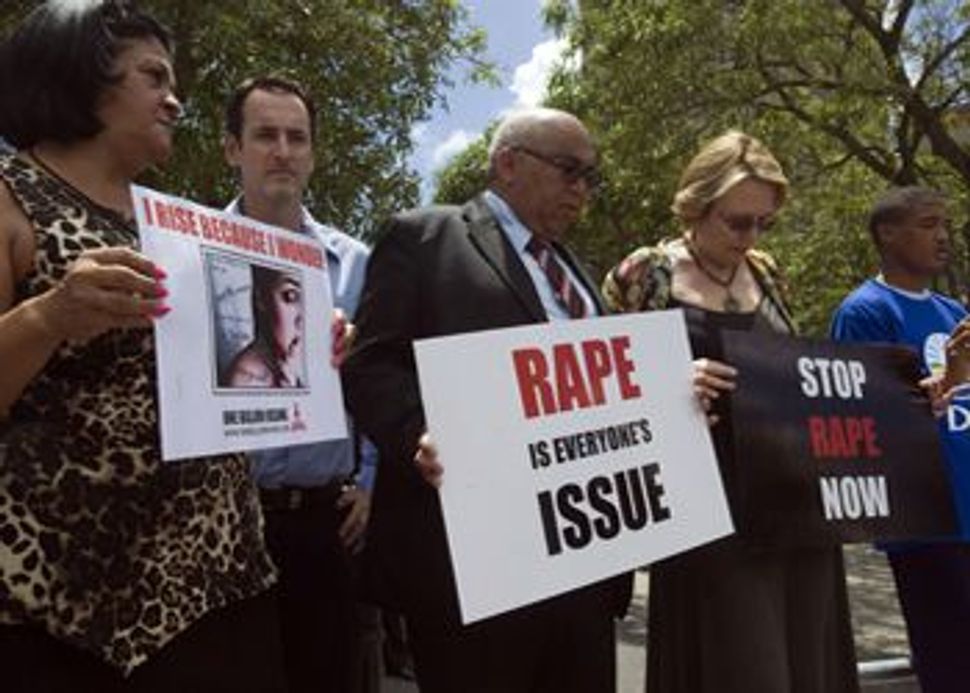 Western Cape Province Premier and leader of the opposition Democratic Alliance (DA) party Helen Zille (2nd R) joins a protest against rape on February 11, 2013 outside the parliament in the center of Cape Town. Image by Rodger Bosch (AFP/Getty Images)

It is estimated that a woman born in my country, South Africa, has a greater chance of being raped than of learning how to read. Here, 144 women report rape to the police every day — that’s six cases reported every hour. These cold statistics from the Medical Research Council (MRC) tell us that a brutal war against women rages on.

While India rose up in protest after the brutal gang rape of a 23-year-old in December, the recent sadistic rape and mutilation of 17-year-old South African Anene Booysen has seen a nation simply shrug its shoulders. Two women on different continents both endured vicious abuse, and their deaths elicited two very different national responses. The tragic deaths of both young women demand that their communities face the horror of sexual violence. Yet the response to in my country has been a state of helplessness, apathy and paralysis to implement change.

Anene Booysen, from a small town in the Southern Cape, was not only gang raped on the evening of February 1st, but had her stomach cut open, her throat slit and her intestines physically pulled out by her attackers. Left for dead with broken arms and legs, this brave woman managed to identify one of her attackers, reportedly her ex-boyfriend, before she passed.

Have we become so de-sensitized and accustomed to the daily violation and humiliation of our mothers, wives, daughters and sisters that we are numbed into inaction? What will it take for South Africa to have its own ‘Jantar Mantar movement,’ which has endeavoured to create societal change across India?

With the MRC estimating almost 60,000 rapes are reported to the police each year, we are confronted every day with stories of rape. This includes gruesome crimes against children and elderly grandmothers. Considering that NGOs like Sonke Gender Justice believe most cases of rape in South Africa go unreported, hundreds of thousands more are likely suffering in silence.

Anene’s murder has shaken many of us here to the core, even eliciting a response from the highest office in the country. President Zuma’s press release on the murder called the events “shocking,” “cruel” and “inhumane.” But despite South African talk radio and social media users calling for the harshest sentences for Anene’s assailants, despite talk of a broad campaign to educate against sexual violence and despite political statements by everyone from trade unions to opposition political parties saying we have no space for such acts in our society, this type of violence continues unabated.

The question of how best to address the issue of rampant rape is a complex one. The African National Congress Women’s League and other organizations have called for a national commission of enquiry into rape and gender-based violence, but I am personally unsure it can effectively end the epidemic. South Africa has some of the most progressive legislation in the world, such as the Sexual Offences Act, to address the scourge of violence against women and children. We also have a national department focused on uplifting women, children and people with disabilities; a detailed 365-day “national plan” launched over four years ago; and a National Council Against Gender-Based Violence headed by our Deputy President to serve as a “high-level multi-sectoral national response.” While comprehensive national strategies and advanced legislation are essential, they are failing to address the magnitude of the crisis and stem the tide of rape in South Africa.

How do we address the deep-seated causes of violence — including the skewed power relations in our country, the issues around the socialization of our youth, and the economic and social conditions most South Africans experience, let alone the lingering trauma from our country’s violent past? From the daily violence and humiliation of Apartheid to the more recent Marikana massacre, where protesting miners were shot by police, and the unending service delivery protests and widespread corruption, South Africans have learned to recover quickly from devastating news and move on as if nothing happened. This self-preservation might be important for our peace of mind in daily life, but certain issues demand we wake ourselves out of this “scandal fatigue.”

Let us stop examining a woman’s dress or behavior as a justification for her abuse. Let us address the poverty and bloodshed in South Africa once and for all. May we end the pain and torture of our children and aged. The broader, grinding mistreatment that permeates our society, targeting our young boys and men as well as our women, has to be addressed and resolved before the war on sexual violence can be won.

I am no expert on sexual violence, gender relations and women’s rights, but I am a young South African woman, and I know that everything that can be done to eliminate the scourge of rape and violence must be done. Anene’s story touches me deeply and I cannot remain silent and still in the face of this evil act. Her murder was a sad day in our country’s history. I hope that the appalling details of this crime not only haunt us and move our collective conscience, but motivate a deep shift in our national psyche and behavior. Let her death not be in vain.