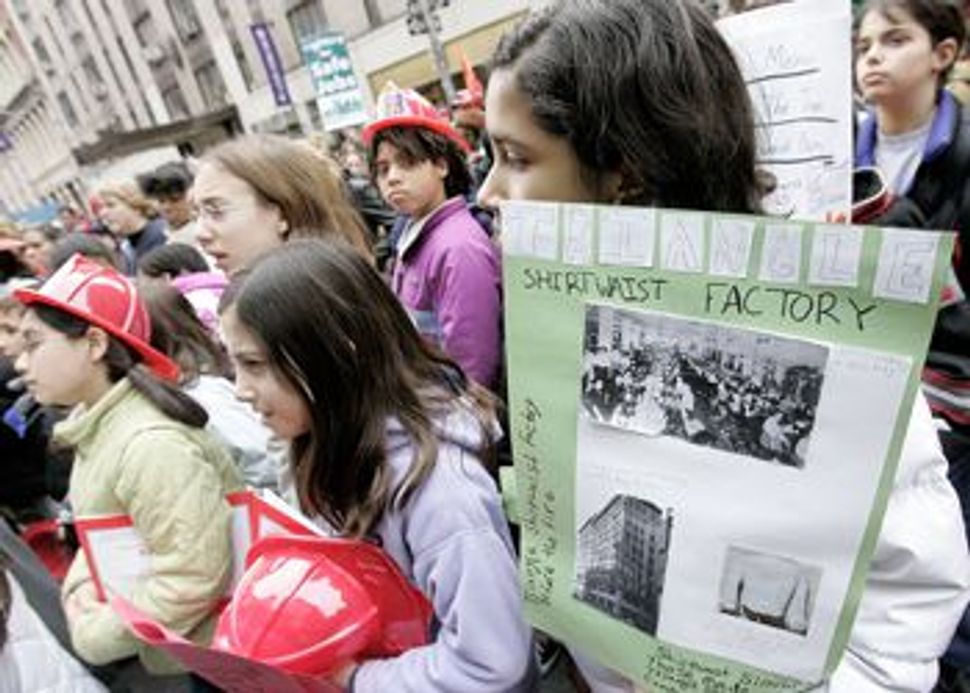 Children attended the 2006 commemoration of the 95th anniversary of the Triangle Shirtwaist Factory Fire in New York City. Image by Stephen Chernin/Getty Images

International Women’s Day began as a socialist holiday in the United States, a day in solidarity with working women who’d gone on strike from their garment factories after the deadly Triangle Shirtwaist Fire. As anyone who knows her Jewish history can tell you, a good deal of these pioneering workers — both the victims and the labor agitators — were Jewish. In the ensuing decade, the holiday spread worldwide along with the movement. It was, for instance, the occasion for men and women to protest involvement in World War I in Russia: a “bread and peace” strike on the eve of the revolution.

Today, the day no longer smacks of revolution. In fact, even the most ardent capitalists embrace the cause: one prominent International Women’s Day website is sponsored by BP, the oil company responsible for devastation on the Gulf Coast, plus a bunch of banks and financial institutions too. Even the UN, which has carried the IWD banner for decades, uses mainstream language like “investing in women and girls” to promote the day.

Here’s the sometimes uncomfortable truth: Women’s equality is (no pun intended) a broad category, and the equality movement is perhaps more liable than most to get its fabric snagged in the back-and-forth tug of the class struggle. Because women’s oppression takes place at home and in the workplace — and that workplace can be a factory, a boardroom, someone else’s nursery or kitchen, or the front lines of the military — discrimination against women varies as much as it sadly persists.

The high-profile debate over Sheryl Sandberg’s “Lean In” — a debate so widespread it’s even got its own Onion parody —is a perfect example of this. No one firing verbal salvos in this argument disagrees that workplace inequality is an existing scourge. But the question of how best to solve it — to work on ourselves, work within the confines of “the system,” reform the system or to reject the system entirely — is the one that trips people up and fuels that anger.

Many of Sandberg’s detractors express concern for those women, like the socialist garment workers who started the first Women’s Day back in 1909, who aren’t even allowed a foot on the economic ladder, much less a seat beneath the glass ceiling. Meanwhile, Sandberg’s defenders make the point that she can only speak to her own experience, and that she acknowledges her limitations explicitly. On both sides, there is visible anger and even genuine hurt that stands in for bigger threads of history, bigger fears. Among these is the fear, I think, that the movement for women’s equality, stripped of its radical roots, will be so successful and become so mainstream it will leave marginalized women — much like the original pioneers, the striking garment workers — behind.

This is particularly true this year. Those of us thrilled by the uprisings of 2011 are experiencing a hangover after the peaceful revolutions in the Arab world, the student strikes in Europe and Occupy here in the U.S. have faded — a feeling that global solidarity has stalled and been replaced by global austerity, violence and more of the same.

But when I imagine the suffragists and the striking garment workers who began this tradition of honoring March 8 — and who probably had plenty of internal quarrels of their own — I’m heartened by their example. I fully believe that we should all confront the “patriarch within,” and emphasize the rights, and fights, which matter to us personally.

But I also hope we use this day to remind ourselves what those picketing foremothers knew. The rights that bring about full equality are intertwined: the rights to express ourselves, to pursue our goals and dreams, to have access to healthcare and to organize. We have to stop believing that all women are scrabbling for the same small slice of the pie and try to eat the whole damn thing. Self-actualization and solidarity don’t have to be mutually exclusive. They work better together, in fact.