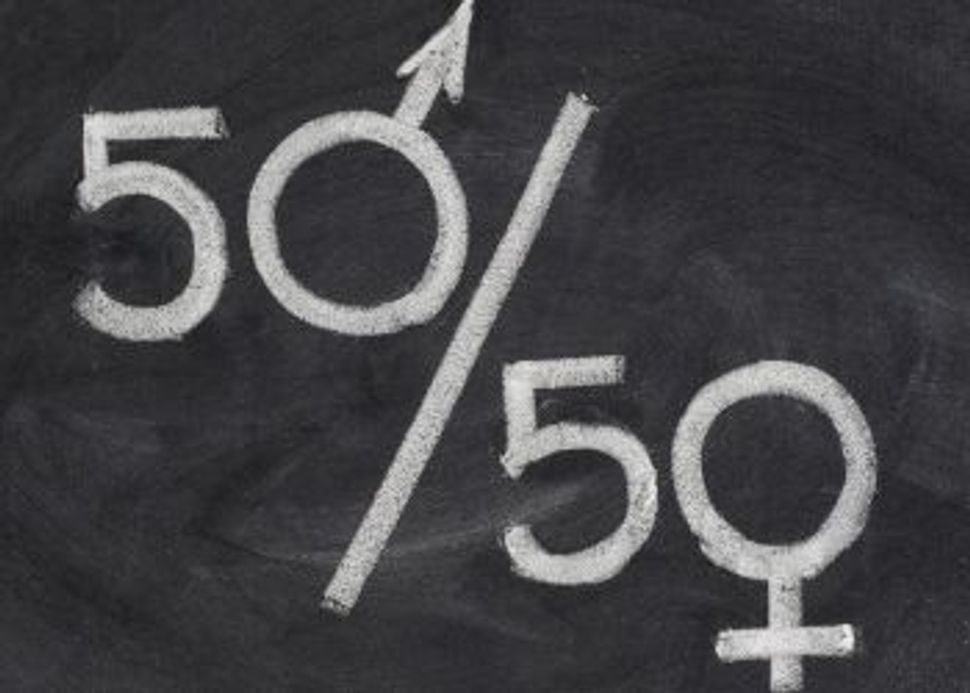 Last week Hanna Rosin scared me. In an essay on Yahoo CEO Marissa Mayer, she expressed a deep skepticism about the relevance of feminism, today and tomorrow.

Let me start by saying I have deep respect for Rosin and the way she often wipes the schmutz off the women’s movement’s collective windshield to help us all see what is up ahead.

But a call to forsake the word “feminist”? Say it ain’t so, Hanna.

This being the Forward and all, I thought I would take a shot at defending the continuation of feminism, as a phrase and movement, from a Jewish perspective. Way, way before Madonna, we Jews mastered the art of self-reinvention without ever totally losing ourselves. Maybe now is the time for feminism to steal a move or two from our playbook.

Rosin’s main gripe with the phrase “feminism” today is that it implies collective action while, she believes, these days the rise of women is happening on more of a person-by-person level.

Of Sheryl Sandberg’s “Lean In,” she writes: “It’s advice for this age of meritocracy, when feminist success largely means professional advancement, one woman at a time. What happens if you’re up against another woman for a promotion? In Sandberg’s world, you go for it.”

And of Marissa Mayer, who now famously said she didn’t identify as a feminist because feminists have “chips on their shoulders,” Rosin writes: “Mayer, however, does not live in a world where collective action makes sense. She lives in a radical meritocracy, where ideas and strategies survive because they are useful, or successful, or forward thinking in some way.”

Rosin might be right that the second-wave marches and even the third-wave online petitions may be increasingly replaced by Rebecca killing it in the lab and Jessica out-scooping her male colleagues at the news desk. But just because individual actions might be the best way forward at this present moment doesn’t mean these individual actions don’t require, or benefit from, a collective context.

This is something Jews have wrestled with ever since we were allowed out of our ghettos and shtetls, or even further back — perhaps since the destruction of the second temple. We have long pondered how to balance the individual and the communal, and which of our actions connect to us being Jewish, and which don’t. Is observing Shabbat what makes us Jewish? What about those of us who only go to synagogue for Yom Kippur? And those for whom really getting Larry David’s jokes serves as the only tether to “Jewish”?

The fact is that the perimeters of being Jewish, on an individual and collective level, have always been and will always be in a state of flux, but a commitment to the existence of something called Jewish has been firm and is the reason we have stuck around so long.

Many would argue that the way we Jews essentially institutionalized arguing has been the secret to our success. Dissent and contradictions have always had a home in Judaism, and, in our meshuggy way, really are our greatest strength. We have never quite managed to agree on anything besides the fact that we should keep up the discussion.

I think if we are going to continue to strive for gender equality we might want to think about feminism in the same terms. We may not agree on what fits inside of feminism and what doesn’t, but we believe there should be something called feminism and will do our best to define it in a way that keeps it relevant and vital.

Jews and feminists also have something else in common, and that is a predilection for victimhood, or as Rosin puts it, “a tendency to cloak yourself in the grievances, even when they don’t really seem to fit.” Much of the Jewish communal identity and expression, before the Shoah but largely after, has centered on the fact that we were oppressed. But today many Jews are moving beyond this fetishization of victimhood and finding other ways to be Jewish that focuses more on positive things like making awesome gefilte fish and creating alternative minyans.

Women, like Jews, were undoubtedly mistreated for a long time, and it is understandable that calling out the patriarchy, or anti-Semitism, is an easy and familiar way to get the troops fired up. But I believe we can change this habit among feminists, like it is being changed among Jews. We just need to find new ways to come together as a movement, instead of dismantling the whole thing.

Some say that we should carry on with a women’s movement, but eschew the word “feminist” because it has too much baggage. And by “baggage,” most people refer to the fact that we still have a reputation as humorless shrews — no matter how many smiley, lipsticked women, or even Andy Sambergs, have worn t-shirts exclaiming, “This is what a feminist looks like.”

But replacing the word “feminist” with something new is a terrible idea. Not only does the word give us a context, it also gives us a connection to all the work for gender equality that came before us. A sense of history and continuity fortifies and nourishes us in moments of weakness and gives us all the more reason to celebrate our victories.

So I say let’s stay feminists, and see it as a strength that right now, we don’t know exactly what that means.