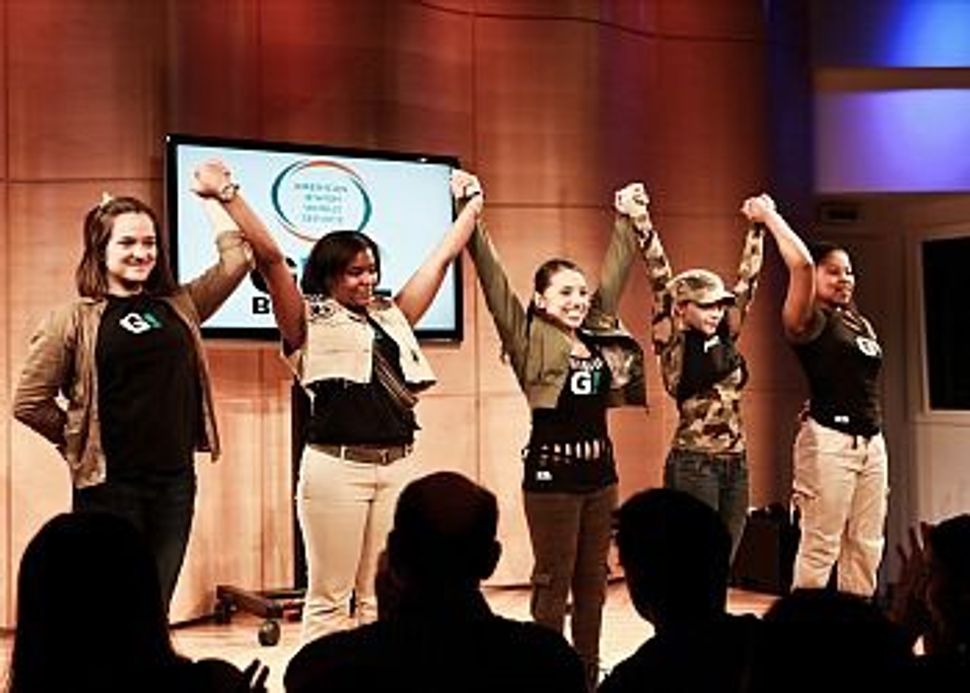 There’s something incredibly powerful about stepping, a form of percussive dance in which the participant’s entire body is used as an instrument to produce complex rhythms and sounds through a mixture of footsteps, spoken words and hand claps. These rhythmic stomping and beats can have a profound effect on the listener as well as the stepper. I should know; I grew up in a household where stepping was the norm.

My father, an active member of a national black fraternity often had brothers over, especially during pledging. Some of my favorite memories are the sounds of combat boots on the pavement that would lure me out of the house and into our back yard. I’d watch with the young men currently on line (pledges) as members of the frat stepped and chanted. Stepping is ancient. It’s culture. It’s a history that lives in the people and communities who make step a part of their lives.

An American Jewish World Service AJWS event was the last place I expected to see stepping, but last week night at the Green Space I experienced the familiar rhythm that puts my mind at ease as much as it screams, WAKE UP! The event, held in conjunction with Global Circle, featured the amazing ensemble Girl Be Heard, a multi-ethnic, youth-led organization that uses theater, song and step to empower girls to write about and overcome violence, gender discrimination, poverty, lack of opportunity and rape as a weapon of war. The performance included 19 original pieces which started with Tikkun Olam, a piece written and performer Monica Furman, a Jewish women living in Brighton Beach.

Speaking with Executive Director Jessica Greer Morris before the show, I could see the passion for the women she mentors vibrating throughout her being. Even as she took the stage to a round of applause, Jessica continued to transfer the praise onto the women who bare their souls, their painful pasts, and their courageous stories during each performance.

While I was comforted by the familiarity of stepping, it was the “WAKE UP!” message that has stayed with me. This performance centered on the conflict in the Democratic Republic of Congo (DRC) with pieces written and performed by the young women from Girl Be Heard. Focused on the culture of sex crimes, rape and violence against women in the DRC, it seamlessly bridged the gap between being a woman in a war torn country and a young woman in New York City.

I don’t know a woman who hasn’t been affected by some sort of sexual violence. The fact that spousal rape wasn’t illegal in all 50 of the states until 1993 is shocking. If the fact that the Violence Against Women Act was only recently reinstated doesn’t surprise you, the fact that we live in a culture where news anchors sympathize with rapists rather than the victims of rape, where slut shaming has become a sport and where street harassment and sexual harassment in the office are commonplace should. Watching these women at the AJWS event bravely share not only their own truths, but the truths of so many women who are silent in the DRC was incredibly powerful.

The night ended with a panel discussion, moderated by Jacqueline Hart of AJWS, featuring two Congolese women, Josephine Kavira Malimukono, the Director for League for Congolese Solidarity, and Chantel Adjelani Kakozy, the Co-Founder and Executive director of SOFIBEF, as well as Monica Furman, a Jewish woman from Brighton Beach and Girl Be Heard member. Josephine and Chantel spoke about the realities of their work in the DRC through interpreter and AJWS Program Officer for Africa, Rosalie Nezien. After the performance, I asked Chantel and Josephine how it felt to see the young women of Girl Be Heard share their voices and stories in a way that many women in the DRC are unable to do. Both expressed appreciation for the solidarity and gratitude for the opportunity to share their experiences through the women of Girl Be Heard. They also urged more women to speak up — and urged me not to turn a blind eye to the plight of women in the DRC.

While the performance was heavy, it was the messages of hope voice and the conviction that served as a reminder of the resilience and determination of women. The common thread between the members of Girl Be Heard and the women of the Congo is this resilience and the strength to go on speaking truths for those who have already been silenced.