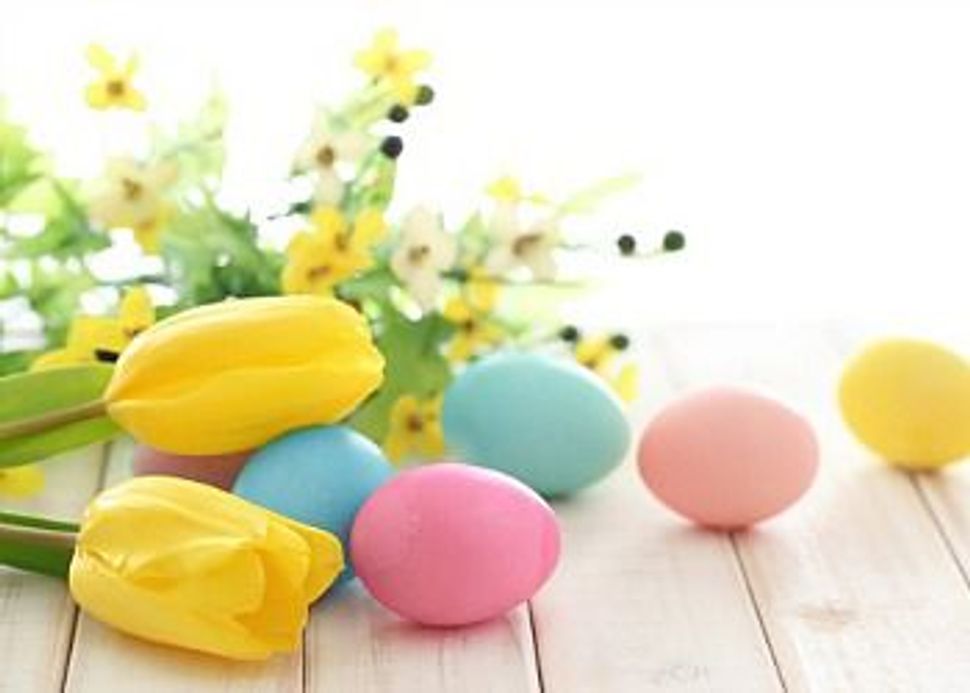 I’ve never given much thought to Jehovah’s Witnesses. I also have a knack for avoiding them on the streets of New York as easily as I can dodge canvassers in Union Square. I don’t open my door for them, and after dating an ex “Jdub” I was pretty sure they were a religious group I just couldn’t quite understand.

All that changed this past Saturday. I was waiting for deliveries from Fresh Direct, FedEx and USPS and, when the doorbell rang, I flew down the stairs and flung open the door expecting to see a courier. Instead, a girl about seven or eight years old reached into her purse and pulled out a pamphlet with an earnest looking, fair-skinned, long-haired drawing of Jesus on the cover below the words “Watch Tower.”

I’d opened the door for Witnesses.

“Hello,” she said, smiling. “We’d like to talk to you about our savior’s resurrection.”

My instinct was to say no and slam the door in her face, but she was so cute so instead I said, “It is almost Easter, isn’t it? Thank you so much for stopping by, we’re Jewish and preparing for Passover, but I’d like to wish you a happy holiday.”

As I started to close the door the man with her said, “You’re Jewish?”

A phrase I’ve heard so many times that I wanted to be even angrier. I had chametz to clear and this guy was questioning my Judaism?

“So you read Torah,” he continued “The Books of Moses?”

His smile grew. “This is amazing! I must ask, how can you celebrate Passover? Do you sacrifice a lamb?”

“Well, then how can you celebrate?” his face was sincere.

“Because the Temple is not standing,” I told him as I stepped onto my front porch. “If it were, we wouldn’t be having this conversation because I’d be on my way to Jerusalem to make an offering. Instead we use symbols.”

We talked a bit more about how Jews today celebrate Passover and how Jews never talk to him. He also asked why I was answering the door on Shabbat when the Jews he’s heard of didn’t. He asked about god’s last prophet, and even though I expected he’d want me to say Jesus, I told him I thought the last prophet of god was probably Muhammad, which we discussed at length. I also told him I don’t think it’s the place of human beings to judge how one finds a path to god.

He thought about that for a moment and then said, “Do you know that the word Easter isn’t in the Bible?”

“It’s not in any Bible! The holiday is Passover and we celebrate on Tuesday, not next Sunday,” he exclaimed.

He was also interested to know why Jews didn’t convert, and asked me how I could spread my truth without proselytizing. I explained the history of Jewish persecution both in Biblical and modern times, relating the Jewish presence in the world to some people’s views and restrictions held on black people in the U.S. He seemed to understand why Jews stopped converting.

While we could’ve carried on for another 20 minutes, we ended our conversation amicably, both wishing the other a happy Passover.

As I explained the conversation to my partner over matzi and eggs, we joked that he’d get back to the hall to report that he’d had a wonderful conversation with a black Jew about Passover — and that no one would believe him.

It’s been over a year since my first Sisterhood article about my first Christmas as a Jew-to-Be, but I’ve come to realize that for the rest of my life religion and religious holidays will continue to overlap. My partner and I are committed to raising children in a Jewish home. They’ll call us either Ima or Mama. They will call her parents Bubbe and Zeyde. And they’ll call my parents Nana and Pop Pop. Christmas cards will come with the Hanukkah cards, Easter greetings alongside the Passover messages and while we hope to instill in them a love for Judaism, they’ll always have Christian influences in their lives, whether from our families or mainstream culture.

For the first time, I realized how many times weather reporters and news anchors talked about the weather on Good Friday or Easter Sunday. I’ve unfollowed several Pinterest boards because every time I look at them I find cute DIY projects — for dying eggs. I wonder how we’ll cope with these outside messages and hope that we’ll teach our children to be not just tolerant of other religious, but to take opportunities to learn from people whose religious views differ from their own.

The past three years have been a time for growth not only as I continue to navigate the ever-changing landscape of Judaism in New York City, but for my parents who have made a sincere effort to understand and respect my religious choices.

Having converted through the Reform movement and adopted Conservative Judaism, I constantly wrestle with traditions that resonate most with me and my life. My desire to learn more drives me to stumble over Hebrew text instead of reading transliteration, to purchase volumes of Talmud that sometimes just sit on my shelves begging to be read. When you’ve converted to a religion and tradition as old as human history, there’s a lot of catch up to do. I don’t have an aunt to tell me stories about the old country, but I find correlations between my black, Christian upbringing in Judaism all of the time. I use my experiences, both positive and negative, to help shape my Jewish tradition.

It is my love for Judaism and Jewish traditions that helps make me the woman that I am today. A woman who unapologetically questions issues of racism, sexism and homophobia in Judaism. A woman who hungers for continued learning, both in my adopted tradition and in the traditions of others. It is only through acceptance that we can grow. And so it is my Passover and Easter wish that we all find the ways in which our cultures, traditions, religions and races overlap rather than continue to hold onto the ways in which we differ — a lesson I learned from a Jehovah’s Witness Erev Pesach.