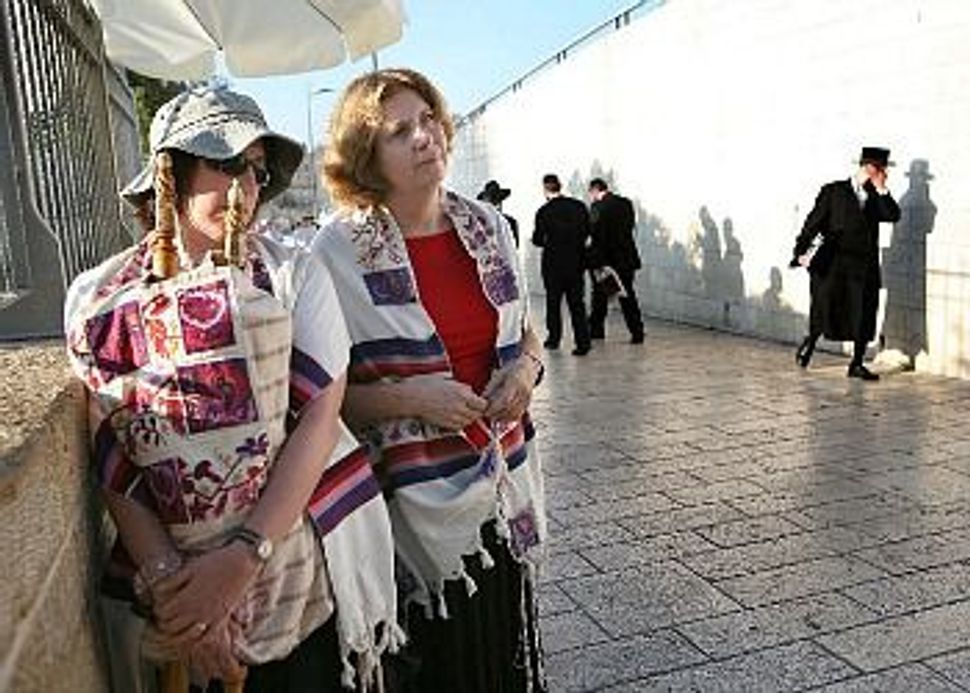 Anat Hoffman and another member of Women of the Wall stand at the entrance to the Kotel as Haredi men look away. Image by Wikimedia

Outcry from Jews in Israel and the Diaspora has led the rabbi in charge of policies at the Kotel to back down from his plan to have women arrested for saying Kaddish, says Anat Hoffman, chair of Women of the Wall.

At a meeting Thursday with Natan Sharansky, chairman of the Jewish Agency for Israel, Rabbi Shmuel Rabinovitch “assured Sharansky that, contrary to the letter [sent by Jerusalem police chief to Women of the Wall], no woman would be arrested for reciting Kaddish at the Western Wall.”

The Jewish Agency made that announcement by posting a note on its Facebook page, which was illustrated with a photo of young women praying at the Kotel.

After The Sisterhood broke the story Wednesday of the police chief’s letter indicating that women would be arrested and charged for saying Kaddish, as well as wearing a tallit, it was covered extensively by the Israeli media, Hoffman said.

On his program Wednesday night, popular Israeli radio broadcaster Rino Tzror said of the warning of arresting women reciting Kaddish, “‘Are you kidding me? Is this real? What if someone just mouths the Kaddish, will she be arrested? How will police enforce this? It’s on the verge of the absurd,’” said Hoffman.

“Sharansky jumped because people read The Sisterhood and called him,” she said.

“Under all this pressure the rabbi backed off” of his planned expansion of the list of prohibitions on women’s religious practices at the Kotel. “It’s very clear that the rabbi is pulling the strings” when it comes to the police arresting women, she said in an interview with The Sisterhood Thursday. “Within 24 hours he backed off because it caused such a stir in Israel and abroad.”

Women of the Wall plans to conclude its Rosh Chodesh prayer service on April 11, which is a few days before Israel’s Independence Day, by singing HaTikvah at the Kotel.

“This is a way on erev Yom Hatzmaut [the eve of Independence Day] to protest that women are not allowed to sing Hatikvah at the Wall,” Hoffman said.

According to Hoffman, women have not spoken or sung the national anthem at the swearing in of new soldiers at the Kotel, which is a national historical site as well as a religious one, since the early 1990s. “There has been a tacit agreement that women [commanders] will not swear in their own soldiers at the Wall and women will not sing Hatikvah. I have gone to swearing in of soldiers regularly and have never seen a woman sing. The IDF’s singing troupe, which has women in it, manages not to send them” to swearing in ceremonies, she said.

According to the Jewish Agency’s announcement on Facebook, “Sharansky is currently in the final stages of drafting recommendations for Prime Minister Benjamin Netanyahu to decrease the tensions and ensure that every Jew in the world can pray in the manner that they are accustomed to at Judaism’s most important national and religious site.”

“Kaddish is in and we want Hatikvah to be in,” said Hoffman. “We want people to be outraged that we’re not allowed to read Torah and wear a tallit” at the Kotel.