Should a Husband Weigh In on Hair Covering? 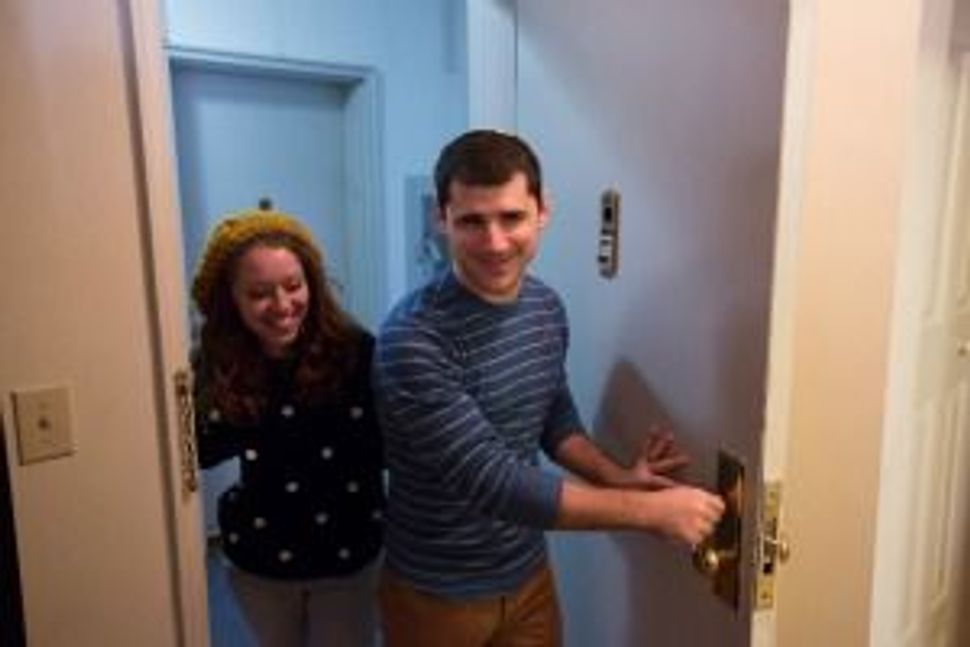 Hair Me Out: Simi and Jeremy talked about whether and how she should cover her hair. Image by Claudio Papapietro

But how women decide whether to cover their hair — and how I decided — comes down to more than just categories or identity; behind each version of hair covering are centuries of rabbinical interpretation, discussion and disagreement.

Since I wanted to choose for myself how I was going to cover my hair, instead of simply asking a rabbi or doing what my mother does, I decided to do some research. It’s actually impressive I was able to come to any conclusion at all, considering how many opinions are out there.

And that’s not even considering the reasons for covering the hair, which affect which way you end up covering it. The decision-making process became more and more frustrating and arduous as I printed out more and more articles and essays on the topic, trying to sort it all out.

And then there was the husband. Or fiancé, at the time. It’s fairly common for a Modern Orthodox woman to make her own decision when it comes to this particular religious practice, because of its personal nature. But Jeremy and I like to discuss everything, and we also like to disagree a lot. This topic was no exception.

Even though Jeremy would not, in the end, pressure me to practice hair covering one way or another, we discussed the topic in depth at the time, and we realized that we disagreed on the tradition so much that we disagree on the very origins of the practice, as well as how it manifests today. While I believe the law has biblical origins, Jeremy does not. I think it has to do with a married woman covering her hair in public simply as a symbol of marital status; Jeremy believes it’s sourced in teachings around ervah, or nakedness, in covering up sexual parts of the body. I think covering my hair is required whether or not times and societies change, and whether or not hair covering is meaningful to the public at large; Jeremy thinks that since hair is largely considered non-sexual, and society doesn’t see covering hair as modest, it is no longer necessary to practice it.

On the one hand, it was helpful to have a foil for all my theories. With Jeremy pointing out oppositions to what I was saying, I was forced to think the topic through — not simply arbitrarily choose a practice, or jump into one impulsively, as I like to do with decisions.

On the other hand, I imagine that having a husband who agreed with everything I thought might make for an easier ride. (In fact, when I asked a friend of mine whether her husband was part of the decision of how she would cover her hair, she said, “No, and I think I wish he cared more.” I replied, “I wish mine cared less. Wanna swap?”)

But the truth is, I wouldn’t want to swap. It’s not easy because I do like to be impulsive and I like not having to think, but I know that it’s also probably much better not to be impulsive. Or at least my therapist says so. I’ll be covering my hair for the rest of my life, and to be doing it in a way that I feel firm in, to know that I was able to argue my position with someone who cares about me and wanted to make sure I was doing what I believed in, will help me when I get frustrated with the practice.

When my hat is too tight or when it throws off the cuteness of an outfit I put together, I know I’m not wearing it simply because I impulsively chose to, but because I think it’s what Jewish law asks of me.

Hair covering is a personal decision, to be sure, but being married means to me that Jeremy’s opinion matters no matter how personal, or even how trivial, the matter might be.

Should a Husband Weigh In on Hair Covering?