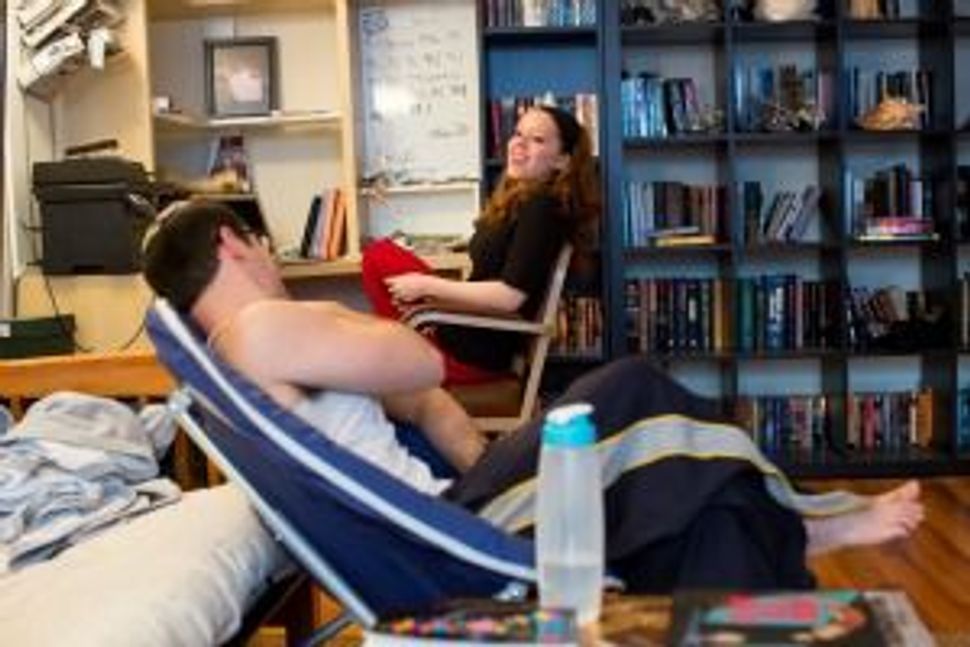 At Home: Simi and Jeremy are navigating niddah. Image by Claudio Papapietro

I went to the mikveh recently, and it was the first time that I didn’t cry. For married women, going to the mikveh comes at the end of the niddah, or the length of the menstrual cycle, plus seven days. It concludes niddah; after a woman dunks in the mikveh she can touch her husband for the first time since her period began. 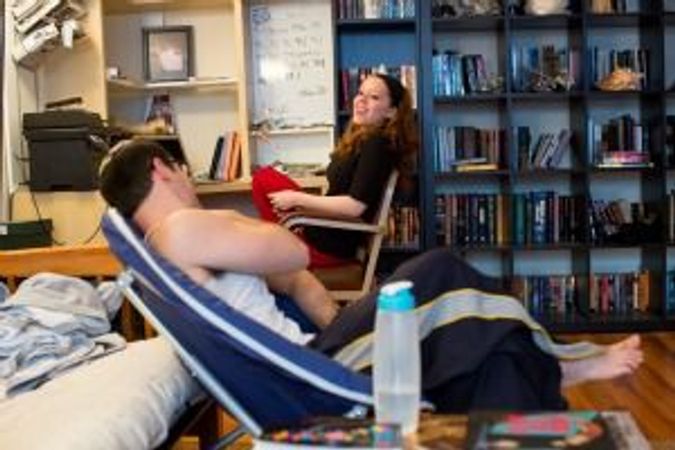 At Home: Simi and Jeremy are navigating niddah. Image by Claudio Papapietro

From everything I was told in high school, the mikveh is supposed to fill a woman with a spiritual feeling; it’s a magical experience, a sensation of rebirth and renewal and possibly, just possibly, unicorns will fly above your head during the process. (It’s highly possible that I’m a tiny bit bitter about what I was told.)

The truth is, the actual experience of dunking in the mikveh waters has so far been fine, if not downright pleasant. It’s kind of like swimming in a heated pool, only naked and with a woman politely watching you. So, weird, yes, but not exactly something to cry about. But the first time, I didn’t know that. All I knew was what I’d been told, and magical rebirth was a lot to live up to.

A lot of women find the mikveh a spiritual process. They spend time in the water after the ritual dunking, praying or praising or requesting. To me, the mikveh was scary. I’ve been practicing Judaism my whole life, and to suddenly have a new law thrust upon me was overwhelming. Before I went for the first time, my kallah teacher, or bridal coach, guided me through the process. But I was still afraid I would forget something or do it wrong. The mikveh process has a lot of steps, including intense cleaning. You have to remove all dirt, which is a lot harder than it sounds. You are supposed to dunk twice, with every part of your body submerged, and if even a hair floats above the water, you have to dunk again. There is also a blessing to say inbetween the dunks, and though the blessing is on the wall, I wasn’t allowed to wear contacts, so I wouldn’t be able to see it; I’d have to remember it. If only I could have had a practice run.

The first time I went was a few days before my wedding. Having a new law to suddenly practice, the weight of all these expectations of wonderfulness that I might not live up to, and yes, probably the fact that my wedding was two days away and I was due for a good cry, all hit me in the private waiting room. I ended up sobbing on the floor, calling Jeremy to calm me down. Suffice to say it wasn’t all that pretty, and certainly wasn’t what I expected to happen. My mother, who had brought me for my first time, came in to hug me and tell me it would be okay. By the time I went in the water, I was calmer, and the experience wasn’t so bad. I didn’t feel reborn or closer to God, but I survived and I did it right on the first try.

The next time I went wasn’t ideal either. I was in a different state, and wasn’t able to go to a mikveh that I was comfortable with. I cried again, yadda yadda. By this time, I was sure that it was just how I would do mikveh runs for the rest of my life: I’d cry, go in, and be done.

But this time, for the first time, I was excited to go to the mikveh. As the niddah time was coming to a close, I looked forward to the end. Jeremy was taking seriously the suggestion from our chatan/kallah (groom/bride) teacher to romance me on mikveh night, and I’m quite happy to be romanced. I still didn’t fully believe that I wouldn’t end up crying beforehand, because clearly that’s what I do, but at least then it would be over.

Finally, though, I didn’t cry. In fact, the mikveh was, if not a rejuvenating, spiritual experience, at least a neutral one, even leaning toward the more positive side of neutral. I prepared for the mikveh with anticipation, not dread. I knew this time what was required of me, and though I was slightly apprehensive about doing it in my community mikveh for the first time, the knowledge that I will be doing it in that mikveh for many years to come helped assuage my nerves. I dunked eagerly, still slightly worried that I would mess up. But it was over quickly, and as I showered and dressed to leave, I was excited. I felt the nervous excitement that I used to experience when I would go meet Jeremy for a date; I was tingly and happy and nervous all at once, and above all, I was happy that niddah was once again over, something that always feels so frustratingly long.

In fact, the analogy of the mikveh night to the wedding night was not perfectly apt but much more understandable to me. I felt a bit like a blushing bride. The mikveh may not have given me the opportunity to reach higher spiritual planes, but it inserted a spark into our relationship. It made the night exciting and thrilling, and the prospect of coming home to my husband was infinitely more electrifying than it usually is.