Women for the Wall Takes On Women of the Wall 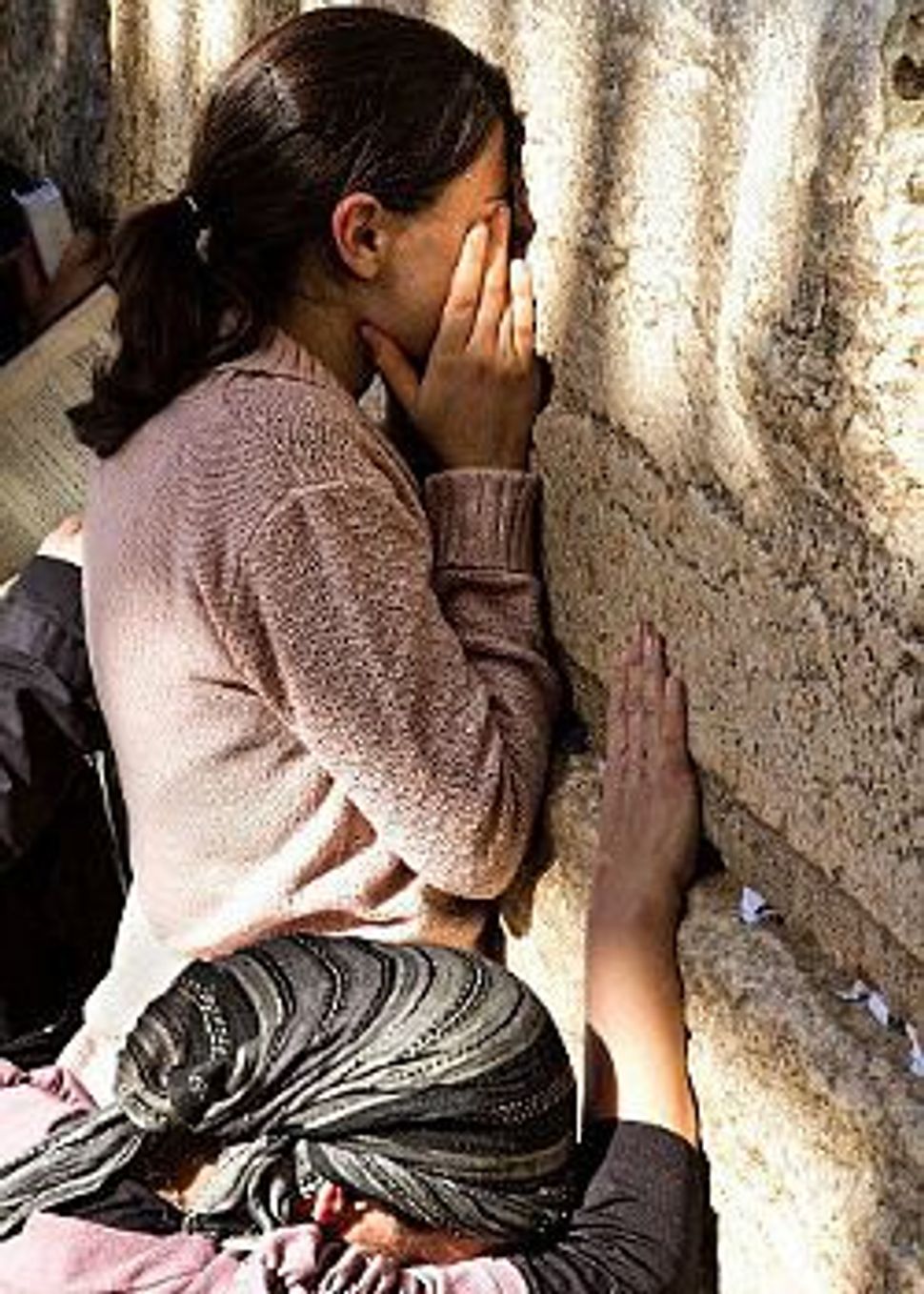 Image by Women for the Wall

Women of the Wall has in recent months attracted lots of press and public support, from Members of Knesset to rabbis and laypeople, particularly since police stepped up arresting women leading Rosh Chodesh services at the Kotel. Women of the Wall then ramped up its own efforts to illustrate that current policy there — which prohibits women from praying wearing tallit or tefillin or with a Torah scroll — is discriminatory. Now there is an additional party to the conflict: a new group called Women for the Wall.

Women for the Wall — abbreviated as W4W — was co-founded by Ronit Peskin, a 25-year-old mother of three, who opposes Women of the Wall’s goals and approach. On its website, Women for the Wall describes Women of the Wall’s efforts as “political battles” turning the Kotel into “a media circus”: They “do not belong at a place such as the Kotel. Their monthly activism threatens to turn this holy place into a site for a media circus rather than prayer, and is disruptive for all that come there to pray peacefully and connect to G-d.”

Peskin writes as “Penny, frugalista” at her website Penniless Parenting and last month began blogging about Women of the Wall/Women for the Wall at the Times of Israel.

She grew up modern Orthodox in Cleveland before moving to Israel, where she became more strictly religious. Now, “I would loosely categorize myself as Haredi,” Peskin said in an exclusive interview with The Sisterhood. She lives in Kochav Yaakov, a West Bank settlement just outside Jerusalem, with her family. This interview was conducted via email at Peskin’s request, and is presented here lightly edited.

THE SISTERHOOD: What is Women for the Wall?

RONIT PESKIN: We represent the vast majority of Jewish women who believe the Kotel should be a symbol of Jewish unity, not a place for political theater and divisiveness.

Why did you establish W4W?

The Kotel is a holy place for all Jews, the one place on earth where Jews of all persuasions pray peacefully, side by side. This is only possible if we honor the traditions that reach back for thousands of years and have held us together as a Jewish nation. I was saddened that a few individuals want to disenfranchise the majority of those who pray there.

There is very little support for the Women of the Wall in Israeli society, and they’re misrepresenting the situation to American Jewry, causing alienation and division.

What are your goals?

We want to preserve the Kotel as a place where every Jew feels comfortable praying, and this is only possible if we honor the traditions that reach back thousands of years and have held us together as a Jewish nation. The Kotel should be a symbol of Jewish unity, not a place for promoting political agendas and divisiveness.

What do you object to, exactly, about Women of the Wall?

The heads of the Women of the Wall have not been honest about their objectives. First they say they simply want to pray, but then they outline a much more radical agenda: banning traditional prayer for part of the day and destabilizing the delicate balance of religious life here in Israel that allows Israel to function as a Jewish democracy. Whatever one feels about their agenda, the Kotel should be a symbol of Jewish unity, not a place for promoting political agendas and divisiveness.

They don’t represent women, certainly not those of us here in Israel. Anat Hoffman portrays this as an issue of “women’s rights” in her speeches in America, but there is little support for this group in Israeli society. The group has a board and staff of 10, has existed over 20 years, but rarely gets over 50 people to show up on Rosh Chodesh.

They demand respect for Jewish women, but aren’t modeling it. When leaders of Women of the Wall say that the women like myself, who oppose their goals, are ignorant of Jewish law, dependent, lacking spirituality, and “subjugated” under the “iron hand” of rabbis with “ultra-misogynist views,” it’s more than a bit offensive, besides being completely inaccurate.

What worries you most about what’s been happening with them in terms of both courts of law and the court of popular opinion?

They make American Jews feel like they’re not welcome in the Jewish state, and that Orthodox Jews don’t respect them. The Israeli government should not feel the need to put American opinion ahead of the Israeli public; there is little support for this group in Israeli society.

We love all our Jewish brethren, and aren’t trying to stop people from serving G-d in the way they see fit. But there is a time and place for everything, and the Kotel should be a symbol of Jewish unity, not a place for promoting political agendas and divisiveness.

What do you think of the Sharansky plan and, if it’s problematic, what exactly do you object to?

My biggest concern is that it won’t solve the problem. The Kotel area called “Robinson’s Arch” was used by the Women of the Wall for years. Now they’ve declared the Sharansky Plan “irrelevant” and said they will insist upon praying in the “Traditional Section” even if the plan is implemented, disrupting those who simply wish to preserve the traditions that reach back thousands of years and have held us together as a Jewish nation.

In addition to Facebook “likes,” how many people are with you in W4W and how are you measuring your support?

We launched a Facebook page and Web site just some two weeks ago. Now we have hundreds of “likes,” thousands of Web visitors and more than a few journalists asking who we are. We have been amazed by the support for W4W from across the religious spectrum.

Do you go regularly to the Kotel yourself? Every Rosh Chodesh, or more intermittently?

The new light rail system makes the Kotel a hop skip and a jump from my home, which enables me to visit the holiest site in Judaism on a regular basis. Tel Aviv has nightlife, Eilat has beaches but Jerusalem has the site of the Holy Temple. Most of the W4W leadership lives in or on the outskirts of Jerusalem.

What’s next for W4W?

We are going to bring our message to the public, that the Kotel should be a symbol of Jewish unity, not a place for promoting political agenda and divisiveness. We understand the Women of the Wall have a message — but that is one that should be delivered in the Knesset, not in a place of worship.

Women for the Wall Takes On Women of the Wall