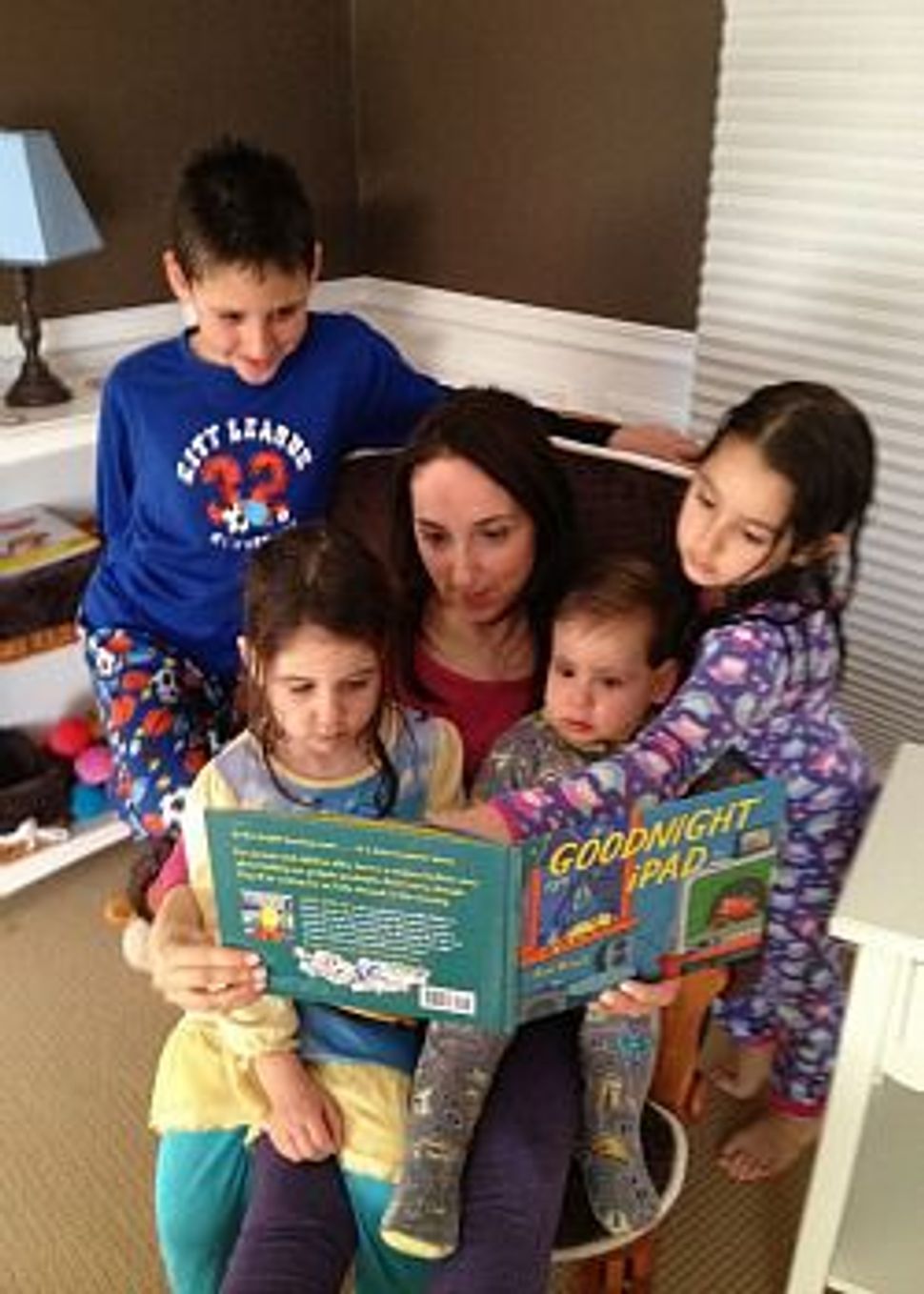 Nina Badzin reads with her children. Image by Nina Badzin

This is the third post in a Sisterhood series by Nina Badzin on gadgets, family and work.

As I reported last month, I’ve made some progress in cutting my iPhone time in half. I started charging my phone in the kitchen instead of my bedroom, which eliminated any phone use in the early morning and during the last moments of the night. (And by “moments” I mean an hour, which is true for many late-night smartphone abusers.) I increased my iPhone-free time on Shabbat and stopped placing my phone on the table when I’m out with friends or family at restaurants and coffee shops.

Progress! Right? From the way I brag about my new habits you would think an awards reception was in order. Unfortunately, my progress has stalled since implementing the aforementioned measures. While I have not backtracked on the changes I made, what’s happening is something I like to call The Spanx Effect.

For those lucky people who have never donned a pair of Spanx, it is a girdle type of fabric made in different shapes and sizes to keep certain body parts in control depending on the outfit you’re wearing. Often, they work. But sometimes, the Spanx so successfully flatten and control one part of your body only to add lumps and bulges to areas where they do not belong. In other words, my phone-free time has created new pockets of phone problems during other parts of the day.

Since I no longer bring my phone into the bedroom, I find myself lingering longer in the kitchen at night than I did before. Likewise, although I have mastered keeping my phone in my purse while eating in restaurants, I end up spending more time in the ladies’ room so I can make sure I didn’t miss an urgent text while I was playing the part of a well-mannered, normal person at lunch. As a mom of four, I like to think that when I say “urgent” I mean that I’m worried the kids’ school or the babysitter called. But that’s not always the case — as I learned on Mother’s Day.

My kids are my rationale for a socially acceptable “quick” phone check any time they’re not with me, but I couldn’t use my worry and anxiety about them as an excuse when my mother-in-law, Marlys, caught me sneaking away during our Mother’s Day BBQ to putz around on my phone. The kids were with us, of course, and so were about 18 other extended family members. After some reflection, I realized the reason I took my phone out of my purse during the evening is the same reason I do it in many situations.

I’m something of an introvert. While I like to be with people and I’m an above-average small talker, I feel drained at a certain point, a point that often arrives an hour or more before my extroverted husband hits the wall.

My mother-in-law, who knows about my attempts to cut my iPhone time in half, gave me a helpful analogy when I explained that I probably use the phone as a social break more often than I’d like to admit.

“It’s like hitting pause on the chaos of the moment,” I told her. She pointed out that checking our phones is the modern-day equivalent of lighting up of a cigarette.

“It’s something to do with our hands,” Marlys said, “and a way to check out mentally when things get a bit overwhelming.”

I think my mother-in-law is on to something. What happened during our dinner was a combination of the cigarette analogy and The Spanx Effect. My Mother’s Day activities throughout the day kept me off my phone even more than usual for a Sunday. Rather than making me forget about the virtual world, this increased time off made me long for it when another minute of face-to-face time felt like more than I could handle, at which point I took my “cigarette” break.

I don’t think I can change my desire for a break when my introvert side screams for a moment without conversation. However, those of us who are drawn to our phones lie to ourselves when we say we’re going to look at our little devices for “a minute” or “a moment.” When has it ever been only a minute?

Still Not Giving Up

Right before I started this iPhone project, I heard my eight-year-old son say to his friend, “My mom is a really good texter.” Of all the things in which I’d like to consider myself a role model for my son (and all of my children), my texting ability is not one I’d consider worthy of mention. I was mortified.

Sadly, he’s right. I am something of a gifted texter, but I don’t want my kids to think so. I need to face the fact that the progress I’ve made to cut my iPhone time in half has not made enough of a difference yet in my life or theirs.

Clearly I need to up the ante. I need to talk less and do more. Gretchin Rubin had a fitting post recently on The Happiness Project in which she acknowledged opposing research about the power of discussing resolutions. There is research supporting the claim that discussing your goals with others aids in keeping that resolution. However, other research suggests that talking about goals can give the false sense of having already achieved the positive outcome.

I seem to have fallen into the second camp, at least on the iPhone issue. Writing about my iPhone addiction and talking about it with friends is not the same thing as spending large chunks of time away from my phone. I vow to do better before my next report. I need to make some substantial improvements before I turn into the kind of person who needs to go to Digital Detox Camp. The mere fact that such a camp sounds dreadful to me instead of relaxing is proof enough that I’m still much too attached to my phone.