When Diet Gets in the Way of Shavuot 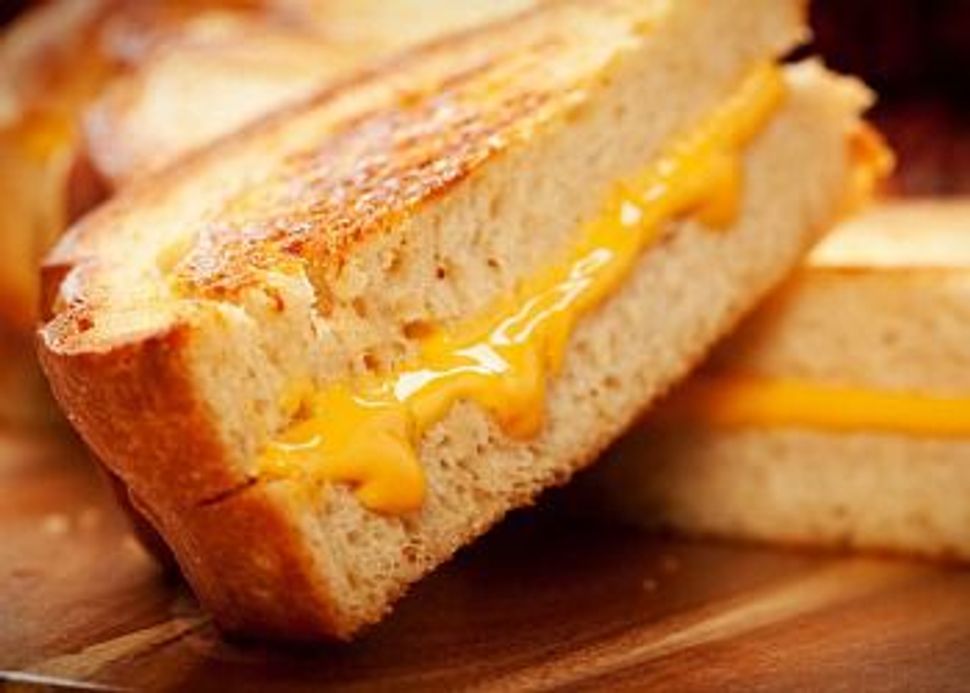 This year, like other years, I am doing nothing special (read: nothing at all) for Shavuot. It is not, as Marissa Brostoff recently noted in Tablet, not hugely popular as Jewish holidays go. Every year I see Shavuot on the calendar and think, What’s that one again? And then I remember, That’s the one about the Torah. And cheese.

Coming from a secular background, all-night Torah study isn’t really my thing. Cheese, however, is totally my thing. Or was, until a few months ago, when I figured out that cheese (along with some other types of dairy food) was responsible for my skin’s return to a state of teenage agitation. Sad as it made me, I decided to seriously limit my intake of dairy. To paraphrase an overused motto, nothing tastes as good as clear skin looks. But this development gave my non-celebration of Shavuot a new significance. What if I was one of those Torah-studying, special-dairy-meal-eating Jews? I wondered. What would I do then?

It would not be the first time that a traditional Jewish menu had conflicted with my own personal dietary needs. For one thing, there’s the fact that a lot of our delicacies and staples are practically designed to be fattening, and I’ve never been someone who can eat whatever she pleases and continue to fit into her pants. I love challah and matzoh balls, not to mention huge deli sandwiches, bagels and lox — and bagels without lox. But if I don’t want to resemble my late grandmothers, both almost spherical in shape, I have to decline those foods more often than not.

There’s a punishingly ironic message in American culture that tells women something like this: You must be skinny! But you mustn’t watch what you eat! If you eat whole steaks and baskets of French fries and drink many cans of beer, that’s sexy! But not if all those calories make you look like a person who consumes a lot of calories! That’s not sexy! But stop worrying about that contradiction! Worrying is not sexy! And have you heard, worrying can make you fat! So relax, have a burger!

Whether or not Jewish women are expected to be thinner than other women, or merely equally thin, we have the added pressure of being associated – within our own culture and beyond it — with cooking and serving massive amounts of food. WASP-y ladies are expected to fit into size two J. Crew skinny jeans too, but at least their stereotype allows them to have a few stiff drinks and a water cracker for dinner. Not so for Jewish ladies, who — if they’re doing it “right” — are supposed to cook and indulge in hearty Shabbat dinners each weekend, latkes at Hanukkah, and Shavuot cheesecake.

And that’s just the weight dilemma. Even those without that particular worry can face other dietary annoyances, like my dairy-induced spots. Then there are intolerances and full-blown allergies, which, unfortunately, I know something about. If you’ve never been a Jew allergic to sesame, chickpeas, peanuts and hazelnuts, let me tell you: It’s a surprisingly alienating experience. Hummus, falafel and everything bagels are literally off the table, and Israel, with its love of Babma and Nutella, becomes far more dangerous than the war zone it’s erroneously made out to be on the nightly news.

But outside of the comments section of food articles, people are mostly understanding about allergies. Other food-related woes are less sympathetic. The last time I ate a donut, for example, the carb overload sent me into a deep exhaustion that rendered me pretty much useless for several hours. It might sound whiny or precious, but I’m not going to risk that happening again if someone offers me sufganiot next winter. And my carb-induced tiredness also rules out regular enjoyment of challah — which I love baking for other people to eat — rye bread, and every heavy dessert from babka to baklava. Oh wait, I’m allergic to baklava anyway.

Add all those complaints together and I’m not only the opposite of carefree and sexy, but by certain measures, a really bad Jew. Yet I know that others have it worse. I’m not a sufferer of Celiac Disease. I’m not allergic to ingredients like eggs or tomatoes, common in Jewish cooking and basically everyone else’s. I have no issues with Passover and Purim’s multiple glasses of wine.

Still, if you can’t eat many of the celebrated foods of your heritage yet you’re too traditional to be a bacon-loving rebel, where does that leave you?

It’s not the deepest of questions, yet when I ponder it, it turns around in my mind in a circle that I can never quite square. It’s a question that might perhaps be nit-picked, in the great Jewish tradition, by the nocturnal Torah scholars of Shavuot.

When Diet Gets in the Way of Shavuot