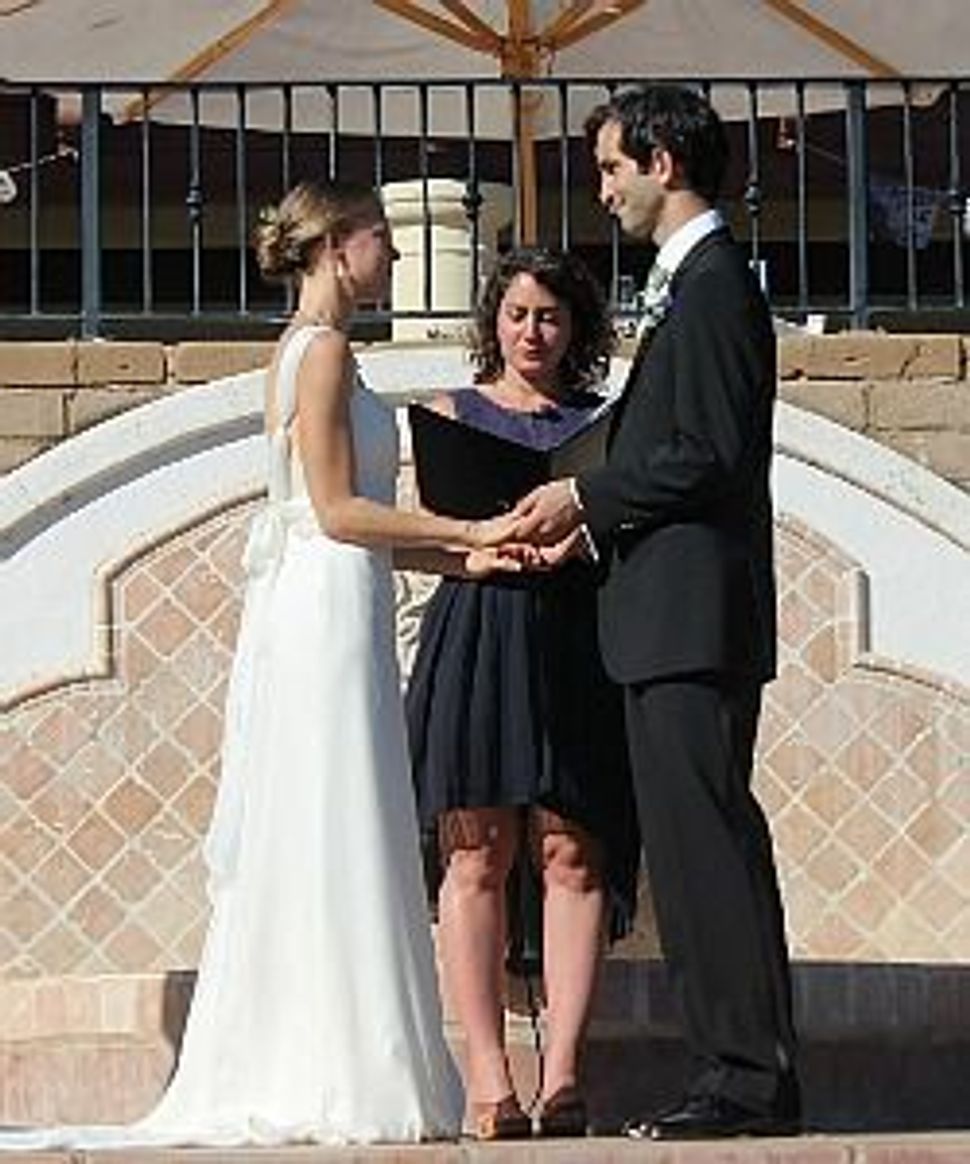 I was sipping Champagne and presiding over witness signatures on a marriage license under the shade of a redwood tree as the sun started dropping over the ocean below the Santa Cruz Mountains.

The newlyweds (my friends) and their families exchanged embraces and congratulations following the heartfelt wedding ceremony I had just officiated. The only catch: It was during the time I would’ve normally been standing in synagogue, feeling a little woozy during Neilah as the effects of fasting came on strong.

When my friends asked me, months earlier, if I would get ordained and officiate their wedding — for which I was instructed to leave religion and spirituality out entirely — I deliberated for a few days. I’m not an observant Jew; I don’t keep kosher or observe Shabbat, and I celebrate holidays only selectively. But Yom Kippur is a day I have taken off of work, fasted and gone to synagogue every year of my life. To go to a wedding instead seemed like it would be perhaps too dramatic a leap toward secularism on too important a day.

I was afraid to ask advice of a rabbi, for fear anyone in a position of religious authority would advise me to politely decline and go to shul instead. Even asking my parents and brother seemed risky; they might tell me I was throwing away any shot at getting inscribed into the Book of Life.

Instead, one by one my family weighed in to encourage me to go for it — even though the task at hand included becoming ordained as a minister, through Universal Life Church.

According to the Modesto, Calif.-based congregation, “Our common thread is our adherence to the universal doctrine of religious freedom: ‘Do only that which is right.’”

But I wasn’t sure whether what I was doing was right, even though my dad’s rationale was supportive. He reasoned officiating a wedding was a bigger mitzvah than showing up at services would be. “Go ahead and do it and have fun and no guilt at all,” he wrote.

My mom invoked a sermon we’d heard years earlier on the high holidays by a reform rabbi, on the challenge of being Jewish without being part of an observant community; conflicts like these inevitably arise when your community doesn’t follow the same calendar.

That tension gets at the root of the bigger conflict for me. As a secular Jew, why continue to observe certain rituals, or any rituals at all? There’s a built-in arbitrariness to picking some holidays to observe and others not to. I’ve accepted tacos al pastor as part of my diet, but not ham sandwiches. No swimming on Tisha Ba’av, though I’ve never fasted on that day, because my grandpa knew someone as a kid who drowned at summer camp for brazenly disregarding the rules that day.

When the wedding weekend arrived, I felt a little confused. Once I’d made the choice to skip Yom Kippur, I knew I would skip it altogether, no attempt at fasting or dovening. But after brunch (I declined on the bacon), I drove into town in pursuit of an hour of prayer at the local Chabad.

My Google maps directions landed me at an empty house under construction, perhaps where a rabbi and his family once lived. So I turned around and drove back up into the lovely hills where my friends were lounging by the pool before the afternoon ceremony.

Despite my plans to go all-out for the wedding, I was dismayed to be missing the holiday entirely. It left me wondering whether it was the act of simply following a lifelong routine, true belief, or Jewish guilt — or worse, simple superstition on a day that would determine whether I was sealed in the Book of Life — that left me feeling so unsettled.

I read a few essays on modern Judaism, from the Jewish Student Information Center, in a paperback called “Living With Torah” that I’d been given in Jerusalem years earlier, looking for a reprimand for my actions.

But I also detected something almost transcendental about choosing to celebrate a joyous occasion: “Once negative motivation is completely under control a constructive use for it can be sought, as is required for teshuvah motivated by love,” Rabbi Dovid Gottlieb wrote in one sermon.

To preside over the marriage of dear friends, to administer their vows and officiate a personalized ritual all about love felt to me like its own form of teshuvah. To be an active participant in this life event felt more selfless than spending the day cataloguing my own sins. The kind of generous, celebratory character I would have normally spent Yom Kippur intellectualizing about while pounding on my heart, I had instead gone and lived.

The most reassurance came from a passage I’d read during the wedding ceremony, an excerpt from “Love,” an essay by novelist D.H. Lawrence:

In love, all things unite in a oneness of joy and praise. But they could not unite unless they were previously apart. The coming together depends on the going apart; the systole depends on the diastole; the flow depends on the ebb.

Similarly, to feel Jewish, I don’t always have to observe Jewish rituals or holidays. I don’t have to eat Jewish foods. So long as I behave in a way I think Judaism is nudging me toward anyway — like participating in major life events for friends — I figure there’s bound to be a natural ebb and flow to my adherence to rituals. If ebbing on religion means flowing toward joyful festivities (even if I show up there as a minister), it seems to me like I spent the day where I should have.

Sara Rubin is a writer in Monterey, Calif.