More Than A Fashion Statement 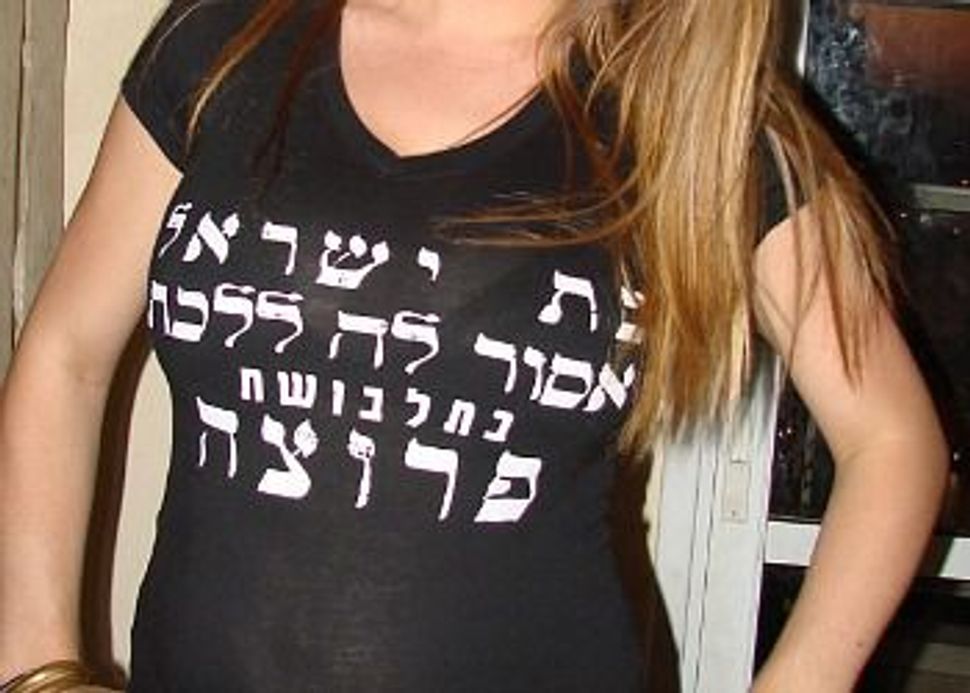 Two new feminist t-shirts entered the world this past month and I am not sure which will incite more scandal, considering the context.

One is a tight, black, short-sleeved v-neck tee that has “’Daughters of Israel, Do Not Dress Provocatively” printed across it in Hebrew. This is the same language women find on signs posted around religious neighborhoods of Jerusalem warning them to not show too much skin.

This shirt was the brainchild of Jerusalem-based Joanne Ginsberg, who came up with the idea after being harassed for her “provocative” dress a few summers ago. She was wearing long sleeves, a long skirt sandals and a head scarf.

As Ginsberg explained to the Times of Israel:

The women had head coverings and shawls and what appeared to be wool blankets draped all over themselves accosted me in the street. They surrounded me.. and had decided to give me a lesson in modesty.

They said they could help me become a better Jewish woman. They could help me reach new levels of modesty. My husband would desire me more. My life will miraculously become spiritual if only I listen to them.

At first, Ginsberg kept the tees on the down-low, keeping a couple a dozen in the back of her Hebrew Tshirts shop for customers she could trust. Eventually she went public, and now sells them on Etsy.

Collins told VICE that she is not surprised by the media storm the shirts set-off, explaining that this was precisely her intention.

“We’re so shocked and appalled at something that’s such a natural state — and it’s funny that out of all the images everywhere, all of the sexually violent images, or disgustingly derogatory images, this is something that’s so, so shocking apparently. The graphic on my shirt is a line drawing, too. It’s not even a full-on image,” she said.

The interesting thing about the controversy surrounding Collins’ shirt is how it is, at this point at least, limited to the media. Ginsberg’s shirt, on the other hand, has a very good chance of getting its wearer hurt considering the rising trend of violence towards “immodestly” dressed women in religious areas of Israel. This isn’t to say both women aren’t breaking important taboos, just that there is so much more at stake, i.e. physical well-being, for women in some parts of the world than others — and these two new t-shirts illustrate that.

Let us not even imagine what would happen if someone stepped into an ultra-Orthodox community wearing Collins’ shirt. Ptui, ptui, ptui.

More Than A Fashion Statement