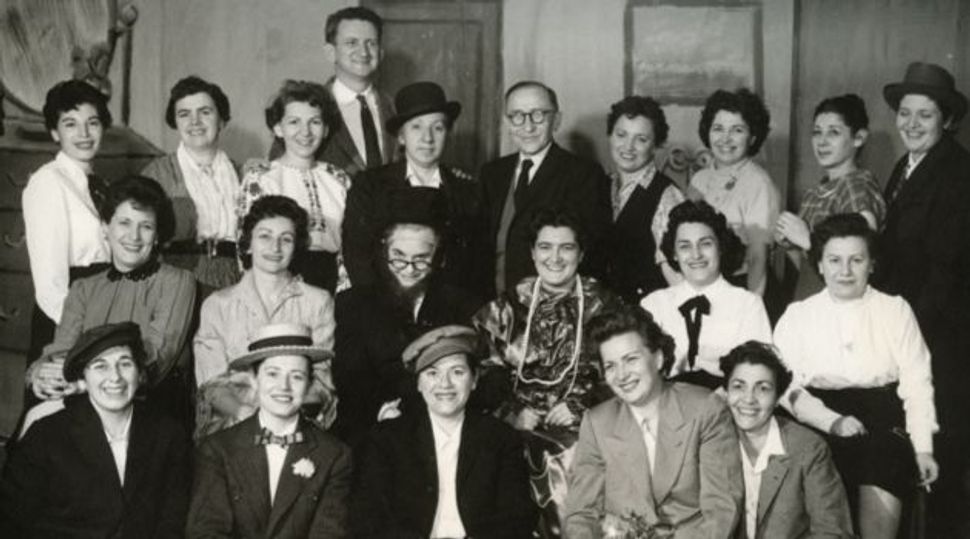 Before there were blogs and Wikipedia, there were archivists like Chana Mlotek, an expert in Yiddish ethnomusicology, whose memory was a trove of cultivated knowledge spanning fields of literature and history.

Mlotek is pictured here (back row, third from right) in the 1960s in the Bronx, with a Yiddish-speaking mother’s group that was affiliated with the Workmen’s Circle in costume for a theater production. Taking time off her full time job at the YIVO Institute for Jewish Research to raise her family, Mlotek brought her deep knowledge of Yiddish, as well as the gift of inspiring those around her to embrace it, to this group of mothers. Mlotek provided musical direction and authentic folkloric resources to the group for its productions of classic Yiddish plays, such as Sholem Aleichem’s “Dos Groyse Gevins” (“The Lottery”).

Educated at Hunter College as well as at a Yiddish Folklore masters class at UCLA, Mlotek began her professional Yiddish career as the Yiddish secretary to Dr. Max Weinreich, linguistic scholar and founder of YIVO. He skill-set led her to be tasked, among other things, with proofreading the Modern English Yiddish Dictionary. Mlotek returned fulltime to YIVO in 1978 and was formally appointed music archivist in 1984. Later years found her in great demand as researcher for such projects as Mandy Patinkin’s Yiddish performance series as well as more recently, Michael Tilson Thomas’s project about his Yiddish theatrical grandparents, the Thomashefskys.

Most famously, she, along with her late husband, Yiddish educator Yosl Mlotek published three anthologies of Yiddish poetry and folksongs that are required reading (and singing) for anyone seriously engaging with Yiddish culture. A Longtime Forverts writer, she and Yosl penned a musical column Perl fun der Yidisher Poezie (Pearls of Yiddish Poetry) since the 1970s. The two were acclaimed for their uncanny ability to research and identify songs submitted as fragments by readers. Humble, ever approachable and generous with her knowledge, Mlotek was reportedly sought out by researchers even as she lay in the hospital in her last weeks. In 2007 she published her latest anthology on Yiddish folksongs from the Ruth Rubin Archive with Dr. Mark Slobin.

Mlotek was also the ongoing creator of the Vertershpiel, the Forverts’ Yiddish word-search puzzle.In her unpretentious style, there were typically multiple winners and all of their names were published in the paper. In her late 80s, Mlotek adapted to digital technology and had an active Facebook presence with worldwide followers.

The Yiddish world lost the most knowledgeable member of its Yiddish music community Sunday, November 3 when at the age of 91, with a new anthology reportedly in the works, zayn lid hot shoyn farendikt/Der nakhtingal in vald — our nightingale ended her song.