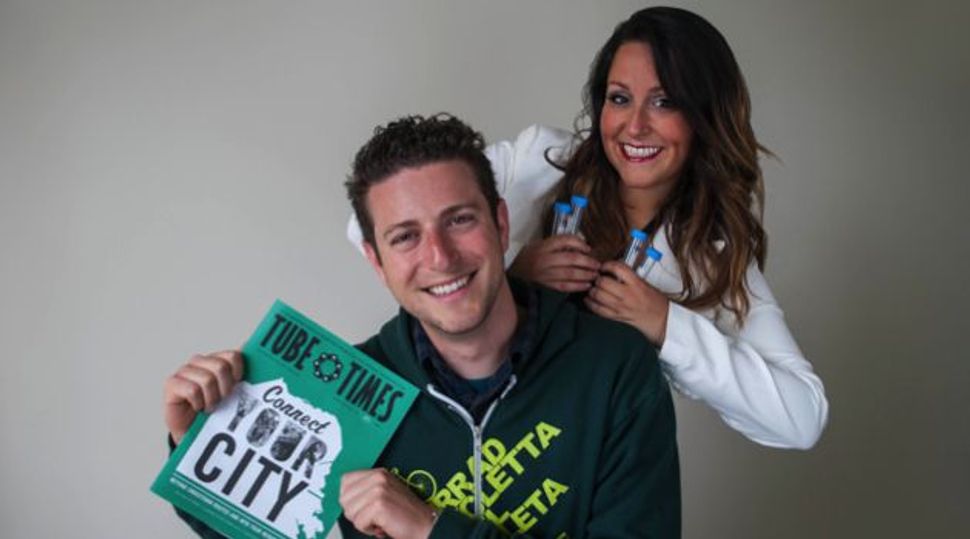 Women are finally mensches — at least, according to the 2014 Mensch of the Month Calendar.

This is the third year that the San Francisco-based calendar of “chosen but not taken” Jewish singles has been published, but the first in which women, as well as men, are featured. The change is in response to requests from local female Jewish residents to also see their good deeds recognized and countenances hung on the wall.

For the upcoming year, each month will showcase one man and one woman, who pose together as a pair. The pairings are based primarily on similar professional or volunteer activity interests. In one case, a brother and sister pose together.

“We decided not to do an all-women calendar,” said 29-year-old calendar co-creator Dana Hall. “We thought that would be too risky, given that our customer base is mainly women.”

The calendar may be a non-profit project benefitting San Francisco’s SMART program (which provides tutoring, mentoring and leadership skill building to economically disadvantaged youths), but Hall is clearly applying some business strategy to it. Hall sold 100 copies of the first calendar. Last year, she sold more than 250, and this year she expects to sell even more. Pre-orders came in even before the new co-ed calendar was officially launched on November 6 in time for the winter holiday shopping season.

Numbers are also up in terms of people wanting to appear in the calendar. “It’s sad to leave people out. It feels nasty,” said Hall about having to choose only 24 mensches to highlight out of the more than 50 who were nominated.

“We don’t claim to be the authorities on what makes a good person,” Hall explained. “But we looked at how people were talking meaningfully and excitedly about doing good. We were looking for people were are not just giving charity, but are also taking a leadership role in their community or volunteering their time to causes. We also considered people who are in a professional field that is doing social good.”

Eric Tuvel is one of the men featured in the new calendar. A 29-year-old city planner and graphic designer working for a non-profit advocating for bike safety and infrastructure, he was paired with Dena Goldberg, 23, a graduate student in genetic counseling.

“It’s great that it’s not just about looks,” Tuvel said of the calendar. He agrees with Hall that a co-ed calendar is better than making ones with men and women separately. “It makes a lot of sense, especially here in the Bay Area, where there is a lot of equality in terms of men and women, gays and straights.” He liked the playful nature of the co-ed pairing and thought it was a great way to meet new people.

Goldberg not only posed for the calendar with Tuvel, but also served as photographer for the entire project. A freelance photographer, she donated her services, and shot the calendar in a studio she built in a friend’s apartment. She especially enjoyed staging the photos and coming up with poses, props and styling ideas to help convey the models’ personalities and mensch-appeal.

Although Goldberg originally thought it would be good to shoot an all-women calendar, she soon realized that the co-ed approach was even better for involving more people and building community.

However, it seems we shouldn’t assume that female mensches are here to stay. “I’m not sure I’ll continue with having women in the calendar,” Hall shared. “It depends on the response to this calendar and how things evolve.”

Is Hall not concerned about backtracking after putting female mensches on an equal footing with male ones?

“Not at all,” she said. “This is just for fun. People know women are mensches whether or not they are in a calendar.”