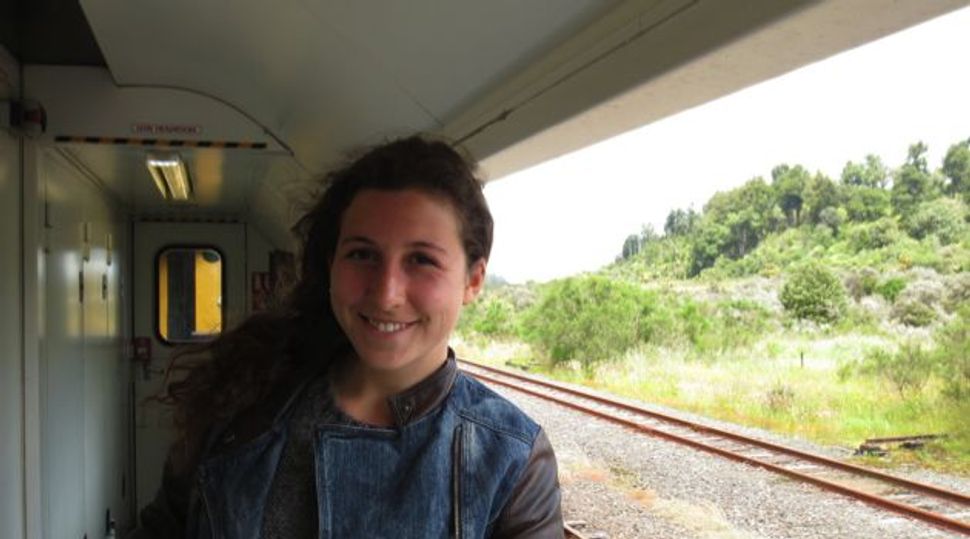 Lily Myers’ poem, “Shrinking Women,” has gone viral. Originally from Seattle, the 20-year-old first started writing poetry during her junior year of high school after she “accidentally” took a creative writing class. She ended up loving poetry and with the encouragement of her teacher, started attending open mic nights. Fast-forward four years, Myers has found her calling.

Currently a junior majoring in sociology at Wesleyan University, Myers is a member of the University’s slam team. As part of the team, she competed last spring at the College National Poetry Slam with her poem, “Shrinking Women.” Her recitation was put up on YouTube and has garnered over 2 million views since April.

Myers, who is abroad for the semester in Buenos Aires, video chatted with the Forward’s Susan Cohen about her poetic inspiration, her thoughts on gender and what it’s like to find out your words are making a difference.

When did you first realize that you were being posted, shared and tweeted?

Well, the video of the poem was getting gradually more and more popular this summer. I was kind of aware of if then, but then didn’t get really big until a few weeks ago when a friend of mine sent it to a Wesleyan alum who works for Huffington Post and that’s when it got much bigger.

A few weeks later it was on Upworthy [an organization devoted to making meaningful web items go viral], but it was cool because when I found out… I had been on a trip with my group in the north of Argentina for 10 days in the desert with no Internet, so then to come back and check my email and see all these messages and Facebook requests and views, it was like, What happened while I was gone?

Have the women who have watched your recitation and reached out to you shared similar stories and feelings?

That’s been the most incredible part of this. I have gotten a lot of emails and messages from women some whom I know, some from earlier parts of my life, some I don’t know who have said they relate to the poem or certain parts of it.

It’s inspired them to write or do some of their own creative work or just to reflect more on these issues. That’s just the most amazing thing. I love [poetry] slam, but to me the most important thing it can do is to help people relate to each other. That’s why I think it’s so powerful — it’s powerful for them, or cathartic or big.

I think I first really explicitly noticed it when I began to write about it. What comes to mind is the moment I started writing this poem, winter break sophomore year. I was home and was so viscerally uncomfortable with how my mom was relating to food. It made me uncomfortable and I wanted to relieve her of that.

Continuing the writing lead me to put myself into the poem. It was once that I was writing and reflecting that I noticed all my behavior in the past that had fallen into the pattern of shrinking.

I used eating in this poem as a way to show a more ingrained way we shrink. Frustrated with ways I would shrink. I would not say something that was on my mind, not take control of a situation. I saw other women around me doing the same thing, like men sort of call the shots and dictate the relationship. Once I began to write, I really started to reflect in a more critical way.

You are very open and honest about your mother. You say, “I never meant to replicate her but spend enough time sitting across from someone and you pick up their habits.” Are you trying to break the pattern and do you see poetry as a means to do so?

Yes, I think so. I have seen myself change a lot. For instance, I almost didn’t do that poem that night. I was minutes away from not doing it. I was feeling small at the time. I had a rough few weeks and I was thinking, “People are going to think that I don’t like men.” One of my best friends was like, “Lily you have to do this poem. That’s the whole point of what you are trying to say.” So I did it and now I’m really happy I did it.

More day-to-day, I find myself speaking up a lot more when I’m uncomfortable. I say it now because it’s true. I didn’t use to identify as a feminist because people don’t like that word or judge, but now I think it means equal rights for everyone and I’m not going to apologize. It feels good to not shrink anymore in that way.

Is your family aware of its presence in your poetry?

Yes. That’s definitely been the hardest part. As a poet you want to write about these things that are very personal and inevitably about people close to you. I never intended for this poem to be this poem. I just started writing one day at my house. The competition was not the Internet. I didn’t ever intend for them to hear this poem, but of course that went out of my hands.

My brothers were super understanding. My dad is a poet so he understood, too. My mom was the hardest. What I have been telling her is that it’s not a personal critique. I love my mom so much and she has been endlessly supportive.

I use my mom to talk about something that affects a lot of people. People used it in a class discussion. One girl said she used it in her all girls’ summer camp. To me that is so cool. If it’s adding to discussion then that’s awesome and best thing it can do. To me, it’s worth it even though it’s hard.

Going forward, do you have plans to continue writing and reciting poetry about women?

When I think what I want to do and continue doing writing is the only thing that makes sense. It’s what I love the most. This experience has gotten me excited about a future in writing that I could maybe have because it was just cool to know my words could resonate with so many people. I write a lot about women or growing up as a woman, the contradictions and challenges, but also the joy. It’s a theme I find endlessly interesting.