The Muslim Film Every Bat Mitzvah Girl Should See 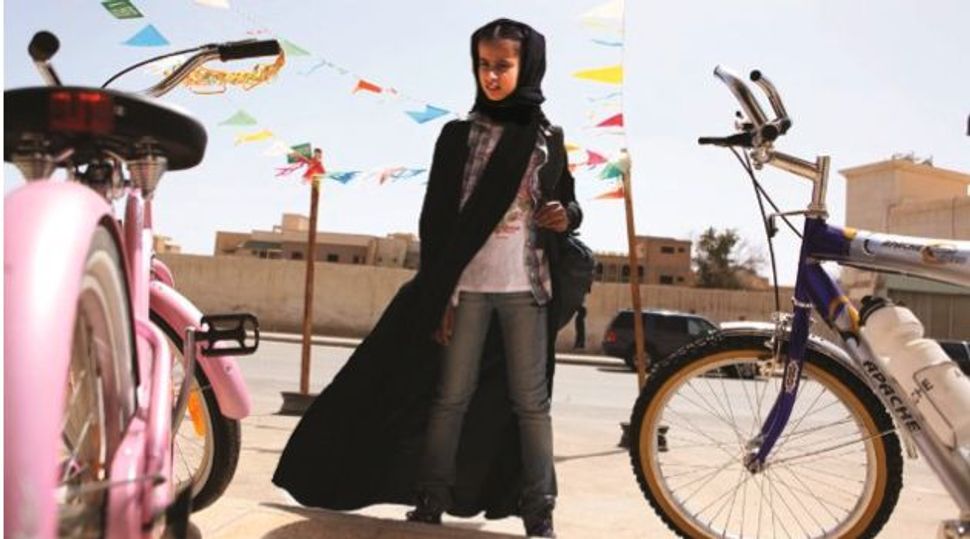 “Wadjda,” the first feature film shot in Saudi Arabia, seems an unlikely fit for a b’nai mitzvah curriculum. Haifaa al-Mansour’s film about a plucky Muslim tween girl in Riyadh whose greatest desire is to buy a bicycle has no reference to Jews and no coming-of-age celebration to speak of. The film’s one connection to issues widely discussed in Jewish circles? A reference to sending aid money to the Palestinians. So why should we take bat mitzvah girls to see this movie?

When my own tween daughter takes a break from her pre-bat mitzvah regimen to see the film, she will certainly watch attentively as the lead character, Wadjda, practices chanting Koran with perfect pronunciation. She might even identify with the girl on the other side of the planet, with derivative pop-punk piped into her ears one moment and legal rulings of ancient patriarchs flowing out her mouth the next. But this is not the reason why one should take tweens to see this film.

“Wadjda” bravely examines how young women are compelled to act against their best interests and to act against other young women as they are forced to conform to gender codes defined by men. Men rarely appear in the film and with the exception of one male construction worker who catcalls Wadjda as she walks to school, there is no scene of male physical abuse or harassment of women. Focusing her lens on the interplay between women and girls, al-Mansour is not afraid to show us how women — both as teachers and mothers — are taught to enforce religiously rooted gender codes and turn against one another as they are forced to conform and to settle.

So, why is this important for b’nai mitzvah students? First, it speaks to the cognitive dissonance that exists between the lived experience of those who chant Torah and the world described in text itself. In the coming months, b’nai mitzvah students will be chanting tales of the polygamous Jewish patriarchs and of the matriarchs that stood in their shadows. Thousands of these tweens will read the biblical tales of polygamy and obsessive focus on male heirs and dismiss them as tales of a backward yesteryear. But for tweens who see “Wadjda,” the stories of Genesis’ women will be understood not as narratives of a distant past, but as part of an ongoing chain of women’s stories. After seeing “Wadjda,” for example, the rivalry tale between the matriarchs Rachel and Leah will be properly read not simply as a drama between two sister-wives, but as a critique of a social dynamic that pits women against one another and forces both women and men to make unnecessary compromises.

But the most important reason that tweens should see this film is that al-Mansour’s work celebrates the small acts of non-conformity that are essential in any narrative of personal liberation. Wadjda refuses to be contained. She wears her hijab in a crooked fashion, she accents her long black dress with Chuck Taylor high tops, she makes mixed-tapes, she refuses to snitch on other girls, she holds on to her bicycle fantasies. And in a hopeful subplot, a boy in her neighborhood serves as an ally, a glimmer of hope for future change in a nation still up in arms over women drivers. As the film ends, Wadjda’s mother begins to see the world through her daughter’s eyes — but saying anything more would be a spoiler.

A smart feminist meditation on quiet and not-so-quiet subversion, “Wadjda”’s message of creative resistance is an essential one for Jewish tweens. Al-Mansour does for Sunni Islam what Avivah Zornberg and Rachel Adler have done for Judaism — she asks us to pay attention to the subtle details of women’s stories in the cloistered spaces of a patriarchal world and to see in those details a narrative thread of universal liberation. To date, no film has done for Jewish patriarchy what “Wadjda” does for Islam. Let’s hope that a bat mitzvah girl — or a bar mitzvah boy — sees this film and gets inspired.

Rabbi Daniel Brenner is the Chief of Education and Program at Moving Traditions.

The Muslim Film Every Bat Mitzvah Girl Should See