Modern Loss, From Those Who Know It 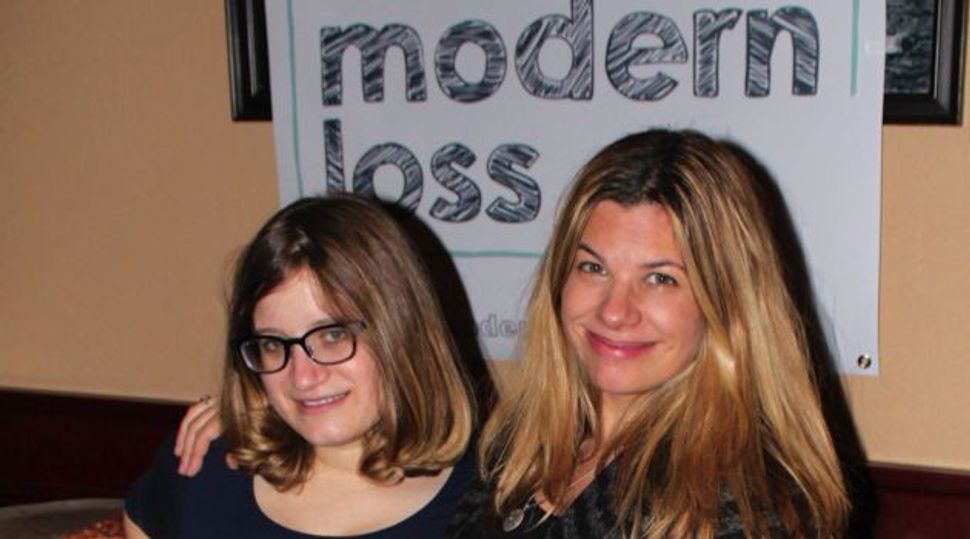 In her essay “The Love of My Life,” Cheryl Strayed writes about losing her mother when she was a young woman, and returning to college to tell peers she had gone to Mexico over spring break. She wished to protect others from her own deep pain. Only later did she realize how unnatural this modern way of approaching loss really was.“ If, as a culture, we don’t bear witness to grief,” she writes, “the burden of loss is placed entirely upon the bereaved, while the rest of us avert our eyes and wait for those in mourning to stop being sad, to let go, to move on, to cheer up.”

Modern Loss is a new website that aims to bear witness. Filled with resources for support and essays to edify and even amuse, it targets young people in their 20s and 30s struggling with grief — and ready to break the unspoken taboo on honest, individualized talk about death. It was co-founded by Gabi Birkner (on the left in the photo below), who founded the Sisterhood during her time at the Forward, and Rebecca Soffer (on the right in the photo). Both women are journalists and media makers who lost parents in traumatic ways when they were young. Together, they wanted to use their skills to help other young people struggling in a new environment where stress over social media protocol after a loss compounds the silence and suffering.

Sarah Seltzer exchanged emails with Birkner and Soffer about women making media, gender and grief and the weird looks the co-founders get when they say what they’re working on. (Seltzer is also a future contributor to Modern Loss.)

Sarah Seltzer: Tell me about the informal support network, Women With Dead Parents (WWDP), that partially led to the founding of Modern Loss?

Soffer: Gabi and I met several years ago while in the throes of deep grief. We connected pretty quickly over being able to exhale around each other. When we hung out it didn’t feel like we had the little black raincloud of grief over our heads that we swore others saw hanging over us. Both of us just kind of got where the other was coming from. We want to help create that feeling in a larger communal way.

But beyond that, for years after losing my mom, I wanted to do the Modern Loss project thanks to my own experiences not getting what I needed from the world (and in turn, not knowing how to ask for what I needed). But I wasn’t emotionally ready to start it; I didn’t want it to be my “therapy project,” but rather something I could approach from a professional standpoint as a producer and writer. After my mom died, I was incredulous that some people I assumed would be checking in on me regularly disappeared into the ether. But other people came out of the woodwork to connect with me because they had been there themselves. They were the ones who handed me stiff drinks, invited me to a movie, or just came over to sit with me in silence. I want to focus on encouraging people to come out of the woodwork.

What kind of content are you hoping to run in the future? Do you plan to respond to the news when it touches on issues of mourning and coping with loss?

Soffer: This site is not just for people dealing with the initial grief period; it’s also for the many of us living with the long arc of it. We have an endless string of ideas for creative content and resources. We’re two women who can’t help batting around ideas constantly. (It’s not unheard of for one of us to text each other at 1:32 am, but we’re both super pregnant and insomniacs.) But also: loss and grief provide endless permutations and combinations of topics to tackle. We are working on new kinds of resources that we didn’t have ourselves, while making sure to continue building out platforms for people to tell their first-person stories.

Birkner: The Modern Loss blog is a space where we can highlight and weigh in on relevant news, as well as changing norms surrounding how we grieve. In a recent blog post, Rebecca took on the whole “Selfies at Funerals” phenomenon. And had Modern Loss been around a few months back, we might have covered such items as NPR host Scott Simon’s decision to tweet his mother’s final moments, and how “Glee” adapted its storyline in the aftermath of actor Cory Monteith’s fatal overdose. Current events may also inspire essays, features and resources on the site.

You are a pair of women in the media who linked up with the women’s media community, specifically the visibility platform, TheList. How has that support boosted you, and how does feminism or gender fit in with your vision?

Soffer: The Li.st has been insanely supportive. If you look at our list of people we thank in our About Us page, a good handful of them are women we met through that group. This community has encouraged us to keep going, connected us with office space, introduced us to developers, provided feedback on site structure, you name it. And in the end, just knowing that this network was a click away buoyed us when we could have potentially felt really isolated.

Birkner: In terms of gender and content, I hope we are able to upend some of the damaging expectations about how women and men, respectively, are expected to mourn. Grieving men, for example, may feel the need to cast themselves in a supportive role, rather than acknowledging that they are hurting as much as the women in their lives. Meanwhile, writer Emily Rapp, in a recent essay for Modern Loss, acknowledged feeling judged for embracing career and romance even as her son, Ronan, was dying of Tay-Sachs.

Given that the topic of grief and loss can be taboo in American life, how have you gauged the reaction to the site launch last week? Are people expressing relief that there is now a space for this? Conversely, do you expect to see a baffled reaction from some quarters?

Soffer: We’re a bit stunned by the overwhelming initial reaction from the first week online. Our web traffic has been really high and it’s been amazing to see how individual pieces have been shared on social media. We’ve also gotten a few hundred emails from people submitting their stories and telling us how happy they are that we are addressing these traditionally taboo topics in such an open (and, when appropriate, tongue-in-cheek) way.

On the other hand, when we explain the project, both of us have endured months of people looking at us like we’re the creepiest people ever. But I think it’s a testament to our belief in its need to exist in the world that we never lost our motivation. We just put on our blinders and kept going.

Birkner: Generally, I think people’s reactions are proportional to their need for a site like Modern Loss to exist. Some have looked at me with relief in their eyes, and launched into their own stories of loss and survival. Others seem perplexed, and have responded with “Ugh, that sounds heavy” or the like.

Birkner: Certainly, it’s comforting to be surrounded by family and friends during the shiva. Yet those days often coincide with a period of shock (and a ridiculous amount of logistics), and the real grief has yet to set in. I could have used a second shiva six months in, when people began telling me that the intense period of grief should be lifting — it wasn’t — and that it was time to move on.

And as I wrote recently on The Sisterhood, I have long had a difficult relationship with the “Who Shall Live and Who Shall Die” prayer said during the Days of Awe. But this year, Rabbi Noa Kushner helped re-frame that liturgy for me.

Any other cultural or faith traditions around mourning you’ve learned about that you find interesting?

Birkner: We are currently putting together an interactive map of mourning rituals from around the world, so stay tuned.

Birkner: Just about everything I know about innovating in the digital sphere I learned at the Forward. Back in 2009, I started The Sisterhood because I saw a need for a safe space where Jewish women across generations and political persuasions in the U.S., Israel and around the world could come together to exchange ideas. Similarly, Modern Loss grew out of a need, this time for candid conversation about losing a loved one, and what life is like in the aftermath — and not just the immediate aftermath. While we were grieving our respective losses, Rebecca and I struggled to find online content and resources that spoke to us. We decided to create what we thought was missing.

Modern Loss, From Those Who Know It