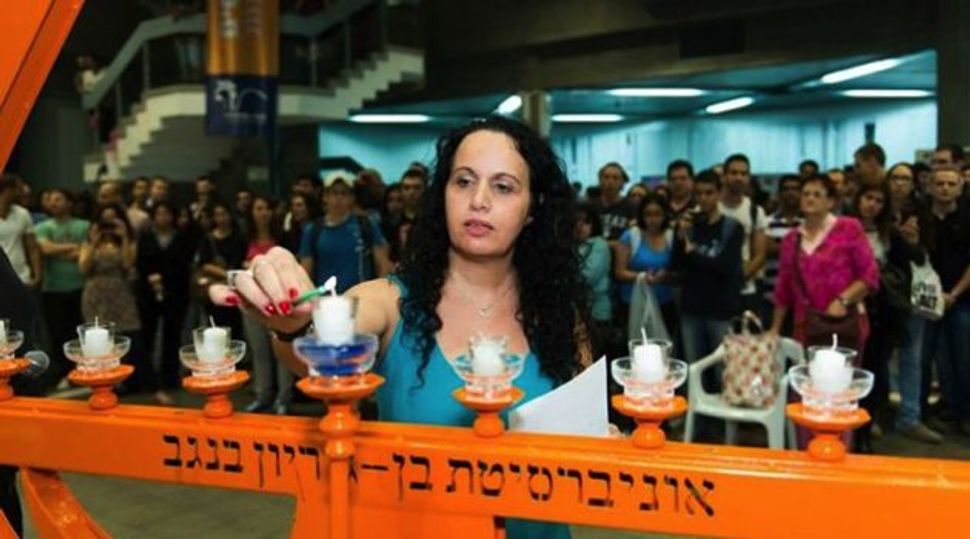 It looked, at first, like another chapter in Israel’s gender segregation wars.

On Monday, an Open Zion/Daily Beast headline screamed that Ben Gurion University of the Negev had prohibited women from lighting the Hanukkah menorah. If a university rabbi had his way, that would have been true.

Even the president of the university, Rivka Carmi, hadn’t realized she was being excluded when she had not, in years past, been invited to say the blessing over the Hanukkah lights, according to former Sisterhood writer Allison Kaplan Sommer’s report in Haaretz.

Late last week a group of female students approached Carmi protesting that women were not allowed to recite the blessing at the Hanukkah candle lighting ceremony at the student center. Carmi agreed that it is unacceptable, and told them that she would have a man and woman jointly light and bless the candles this year, and next year have the genders take turns on alternate nights.

According to Kaplan Sommer’s report:

She thought the problem was solved. But then Rabbi Gil Blizovski, the Orthodox campus rabbi, objected — and she agreed to compromise with him, in acknowledging the fact that he had already worked hard to organize the imminent event and he said the women’s prayers would offend his sensibilities. This year, “out of respect,” she agreed that the women would light and the men would bless the candles; but “I made it clear that next year it will be my way or the highway,” she said.

The female students didn’t want to back down and asked for a separate party where women could do the lighting and the blessing, and Carmi agreed. Then the women spoke with the dean of students, who sided with the rabbi in that only men are permitted to light and bless Hanukkah candles.

And that set things off faster than a dreidel falls down.

The story ripped through headlines in Israel and abroad.

But BGU’s Carmi pushed back. She told Haaretz that the dean’s personal views are “totally unacceptable” as university policy. And the university quickly put up a statement on its Facebook page:

BGU spokesperson Faye Bittker told The Sisterhood that “The president was not going to allow any sanctions against women lighting candles.”

And she did not. A female university employee lit and blessed the large menorah at BGU’s student center on Tuesday. A four-woman quartet from the university choir sang Hanukkah songs. The same dean of students who had earlier agreed with the campus rabbi came and led the service. The group of female protestors said they would cancel their planned event on Wednesday in order to participate in the main university ceremony.

The only one who opted out? That Orthodox rabbi.