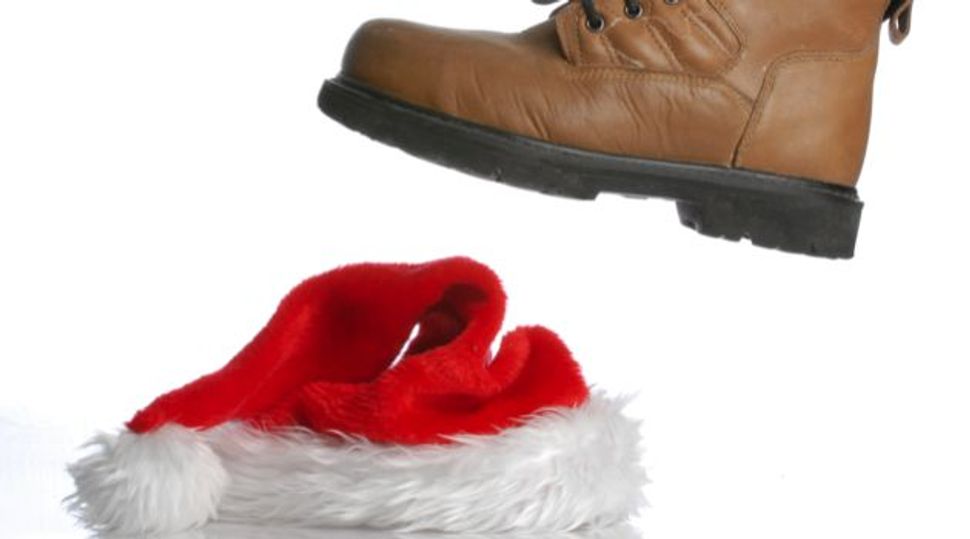 Every year around Christmas, I see a schism among Jews. There are those of us with Christmas envy who want to join in and embrace it, and then there are those like me, the Scrooges. The ones who say, “Hey guys, this holiday celebrates the birth of Jesus. Not my messiah. Not my religion. Not my holiday.”

I don’t want to write a humbug-filled post on the day before Christmas directed at those who legitimately celebrate. I respect the fact that for Christians, particularly those of you who are secularly-inclined, this is your only major celebration. In fact, we Jews are kind of better off in this department. We get Hanukkah and Passover and the High Holidays, multiple nights of each. You do Easter, sometimes, but let’s face it: this is kind of your day. It’s the day that magically turns the most skeptical, rational, hard-headed of you Christian folk into gooey wreath-loving, eggnog-snarfing cornballs celebrating in joyous harmony. Okay, I say, mid-gag: enjoy it. See you on the other side.

But personally, I reserve my right to stand on the sidelines, fold my arms, and resent the fact that in America and in Western culture, this holiday symbolizes cultural and religious hegemony. And I’m firmly on the outside of that hegemony. Stockings do not make me go aww. And honestly, I don’t care about your cat or dog in a Santa hat, your wrapping station or your wishlist. My family gives each other gloves and books, not giant wrapped monstrosities of capitalist excess at this time of year. (I do like gingerbread cookies though, so feel free to give me some.)

I get the impulse among my fellow Jews to just throw in the cards and join in, because honestly, the level of left-outedness that Christmas inspires is epic. But I think it’s important for us to remember what it is to be an outsider, in a country and culture that has for the most part accepted Jewishness into the privileged majority. I try take this moment of extreme cultural exclusion and use it to create empathy for all excluded peoples, and for those whose exclusion produces more than crankiness but a genuine dearth of freedom and opportunities. This year, my mind is on the Sudanese refugees in Israel, for instance.

Part of this reaction to Christmas is my personality. I’m not the kind of person who solves the issue of being left out by trying to join in. Instead, I tend to dig my heels in further. But part of it is principle. I implore my fellow Jews to do the right thing on Christmas. No trees, no wreaths, no carols, no cookies — unless, of course, they’re fortune cookies. Get yourself on line for a movie and fill yourself up with fried rice. This is not our holiday, and trying to pretend it is is just silly.