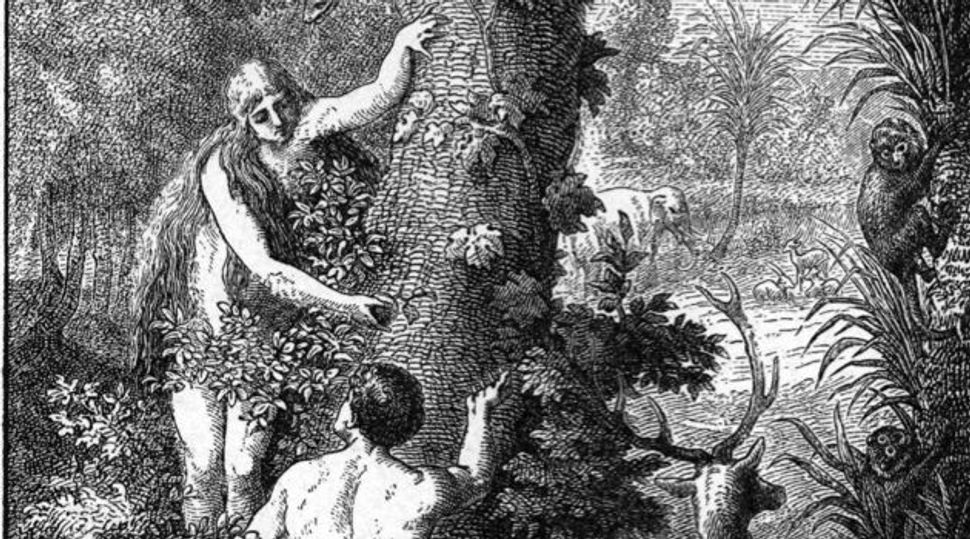 For so long, I took their word for it. Eve — the world’s first woman according to the creation myth of Abrahamic religions — messed up. Her punishment, two-fold.

One, she was kicked out of Eden, sweet Eden, where she spent her days sauntering around naked, no shame in her step. There she led a life of comfort and ease. Absent was hunger, fatigue and ever needing a jacket.

Two, she would be subservient to her husband and experience great pain in childbirth.

Before I had a kid I always focused on how horrible it was that she was to be ruled by her husband (though, very interesting that this was considered a punishment way back when), and suffer great pain in childbirth. And then I had my son and began to see it otherwise.

The expulsion from Eden wasn’t just a punishment, it was also the most marvelous of gifts! We lost the ability to live in God’s perfect creation, but gained the ability to create ourselves. East of Eden, Eve was able to have children.

Being pushed out of Eden was supposed to push us further away from from all that is infinite, eternal, immaterial and majestic. But having a child, making new life out of life, out of love, surely, brings us closer to the mysterious force behind existence. This is the case with actual children, and anything other replications of our selves we might create as human beings, whether through art, words or motorcycle stunts.

My son is fourteen-months old now. At this point I have mostly forgotten the pain, exhaustion and feelings of complete ineptitude. The suffering is completely overwhelmed by my son, my life, a giddy and buoyant creature who makes me feel giddy and buoyant in return. I suspect Eve, mother of all living things, would have experienced this same rush. I doubt Eden could have been that much better.

The bible only has Eve speaking one line following the expulsion from Eden. “I have gotten a man from the lord,” she says, describing the birth of her first born son Cain.

What Eve doesn’t mention here is as interesting as what she does. She makes no reference to the pain of childbirth, nor does she speak of Adam. The two things that were supposed to define her existence post-Eden go completely unmentioned, potentially ignored.

Eve does, however, mention the Lord. This might have been an act of deference to the figure whom was the only parent she ever knew. Or maybe it was a declaration of the feeling of divinity that she, like me, experienced by giving birth to a child.

Interpretations of Eve’s story have always been subject to the social, moral and political conventions of the time, and for a long, long time those conventions were unfair, to put it politely, to women. Though now that time has mostly passed and we are free to open ourselves up to aspects of this formative myth that went unexplored for centuries.

For me, this began with paying more attention to what she said after she left Eden and created something of her own, and discovering that I feel exactly the same.

This is reprinted with permission from LABA: A Laboratory for Jewish Culture, a program of the 14th Street Y that uses classic Jewish texts to inspire the creation of art, dialogue and study.

They’ve just put out their first journal of the year, featuring art, music, writing and some rather subversive Torah commentary. This latest one is all about Eve, and takes a look at mothers as creators and destroyers of all living things — a topic most of us can relate to. Join them at the Manhattan 14th Y on 1/25 for theater, music and a short lecture on creative and destructive mothers.