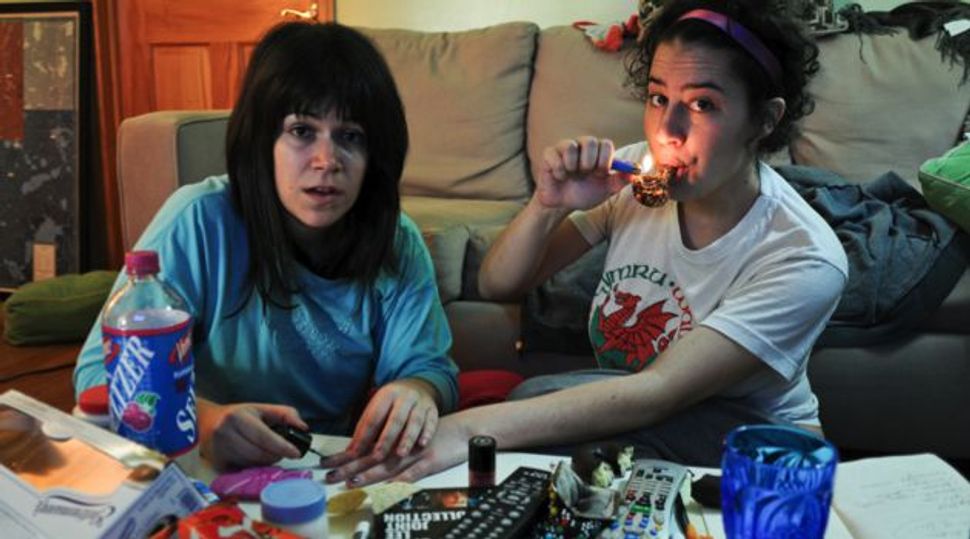 I love the pot-puffing Jewish broads of Broad City (both of whom the Forward recently interviewed about their very raunchy new Comedy Central show.) The show’s protagonists are “Abbi” (left in the photo) and “Ilana” (right), heightened versions of their creators Abbi Jacobson and Ilana Glazer. These gals are not “strong female characters” in the classic sense, but they are strong female characters in another sense that is too absent from our pop culture: they are total screw-ups.

A lot of women, even feminists, may be uncomfortable watching other women embrace the silliness of playing slackers, layabout and stoners who fall asleep on the toilet, get maced by their neighbors and blow smoke at each other through Skype, but I find in the show’s very existence a refreshing dose of equality, like “Girls” without the self-seriousness sentimentality. There is little friendship drama between Abbi and Ilana: they are both just fairly selfish but mutually devoted young women trying to scrape by with enough weed to make it through their crappy days.

When I was just starting out as a journalist, one of the first articles I ever wrote that resonated more widely than I expected appeared in Bitch magazine, a long “think piece” about the lack of stoner and geek movies featuring women. This was during the “Knocked Up” era, the glory days of the Judd Apatow manchild/bromance genre, and the ensuing backlash against it. While some feminists were irked at the glorification of childish men in these films, my complaint was more complex. I felt that if childish egotism is a funny trait we enjoy watching on our screens it shouldn’t be confined to one gender. Let both genders share the immense privilege of letting us laugh at their folly.

I complained in the piece that I’d never see a group of girl nerds smoking a bowl together on TV, that “no mainstream movie or TV series would dare group so many female nerds together, or celebrate them so unabashedly.” Well, Abbi and Ilana aren’t exactly nerds, but they have a dorky quality and they smoke bowls together, so I declare myself satisfied.

In the world of drama, of course, good roles aren’t necessarily “good” roles — Lady Macbeth is a coveted role even if she’s not a feminist role model, for instance. And in the case of “Broad City,” I would say that these bad girls are great for all girls. Women face enormous pressure to be well-groomed, healthy, fit, and to keep our appetites and desires for pleasure to ourselves. But Abbi and Ilana are very in touch with their ids, and they pursue their desires with zeal, but incompetent zeal. I love it. Take that, patriarchy.