Meet the Broads of ‘Broad City’ 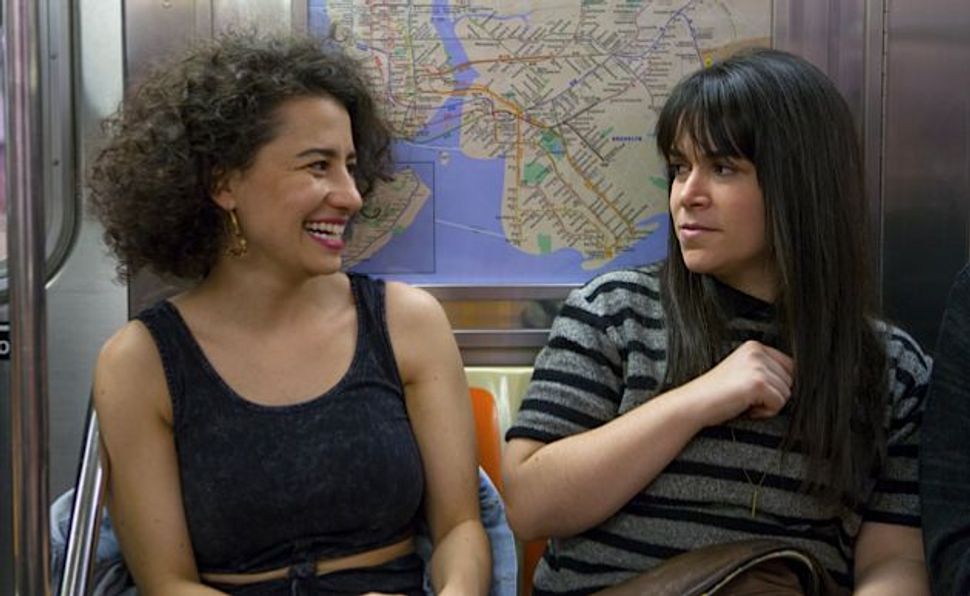 The cable television universe isn’t necessarily being taken over by female comics, but it seems that way: Sarah Silverman, Amy Schumer, Lena Dunham and now Abbi Jacobson and Ilana Glazer, stars of the new Comedy Central series, “Broad City,” an outgrowth of their popular YouTube series.

The two ladies share at least two characteristics with their comedic antecedents. They are Jewish and they push the comedic envelope very much towards the very edge. Push? They kick it over the goal line. In the opening minutes of the first episode, Ilana Skypes Abbi while having sex.

The two slackers’ main ambition seems to be to get money for pot and Li’l Wayne concert tickets. To help raise funds, Ilana places a Craigslist ad that reads: “We’re just 2 Jewesses tryin’ to make a buck.” They’re hired by a gentleman who wants them to clean his home while they are in their underwear — and he’s in diapers.

Abbi (straight hair) and Ilana (curly) spoke to the Forward about summer camp, being a “double Jew,” and having sex on Skype.

Curt Schleier: Can you tell me a little about your Jewish backgrounds?

Abbi: I’m from outside Philadelphia, a town called Wayne, which is like 25 minutes northwest. I am Reform and had a bat mitzvah. Yeah, I did celebrate the holidays. I’m not super, super religious. If this is okay to say, I’m more culturally Jewish. But I always go home if I can — if we’re not shooting or something — for the Jewish holidays. And I went to overnight camp for a very long time, which I feel these days is a very, very Jewish thing to do. My parents are no longer together, but they met at an overnight camp called Shalom in Pennsylvania and I ended up going to camp and so I think. Oh I went on Birthright…

Abbi: And I’m so happy I did that.

Ilana: I grew on Long Island, eastern Long Island, Suffolk County town near Stony Brook University. I feel more Jew-y than Jewish because I feel more cultural. Like Abbi, I’m a typical Reform girl. Had a bat mitzvah. Did my confirmation. And my observance has dissipated. I really do love the culture and I’m proud of the culture. My grand parents were all from the boroughs, Brooklyn, Bronx, which sort of makes them double Jews. I feel my family is very much like Linda Richman, typical type of New York Jews. I think growing up in NYC, any of the boroughs, makes you a double Jew and comedy makes you triple.

How did you get into comedy?

Abbi: I started getting really interested in comedy when I was in middle school. I was really into SNL [Saturday Night Live] and I started putting on these little skits in school and started taking [comedy] classes weekends in Philly. I ended up going to college for visual arts but moved up to New York after I graduated from college in 2006 and started going gung ho to the Upright Citizens Brigade and I realized that that was what I was really interested in and what I really wanted to do. I met Ilana in 2007.

Ilana: And she fell in love.

Abbi: [By then,] I was already hooked in the comedy world. We met on an improv team and performed together for about two years on that team. And then we both decided we were going to create material for ourselves and we started making “Broad City” as a web series.

Ilana: I was really obsessed with comedy. My brother Elliot is also a comedian. We played a game where we owned a TV network and became obsessed with writing news sketches and parodies, my parents were generous and gave us a camera. My brother went to NYU and I just followed him here with comedy in mind.

Did you come from a funny household?

Ilana: Yes. Humor was a big communication tool. They are so funny. I steal from them constantly. They’re funny intentionally and unintentionally.

A lot of funny people are products of United Citizens Brigade, including Amy Poehler, who is kind of a mentor to you. How does that work?

Abbi: There are different level classes and you keep going.

Ilana: There are four core classes that you take and then the fifth is like advanced and the sixth is like a college workshop. At the top, you have to audition for the house team. We’d been doing it for a couple of years and couldn’t get on the house team. That was one of the reasons we started making the web series.

Abbi: I’m really okay with not getting on the house team. But it took me a while to get to that point.

Were you both into improv? You didn’t do stand up or anything like that?

Ilana: I did stand-up. I wasn’t great at improv, good at stand-up. But I wanted to be around the people I hoped to write for.

Abbi: I actually did sketch and put up a solo show at UCB called “Welcome to Camp.”

Has the web become the comedy club circuit of the 21st Century?

Ilana: Yes, definitely. It’s become the equalizer because anybody can do it. Before we even decided what the show was going to be, we thought we would put up something we could send our parents to show them that we were focusing our energies in the right direction.

On the subject of your parents, what was their reaction to your kind of negative self-portrayal?

Abbi: What would be negative? They know it’s heightened versions of ourselves, so I don’t think they’re bothered by the characters.

Ilana: They’re surprised, but I don’t think they’re bothered. They’ve been fans since the web series.

Is there some cosmic lesson about people your age we should know about?

Abbi: I don’t know if I’m qualified to make an over-arching statement about young people because I don’t know if I’m so young anymore. One thing I will say is that we sort of talk about the characters in the show being us before “Broad City,” so they’re younger versions as well as being a little bit exaggerated. I think we try to show that young people today are really honest and open and share a lot of themselves with strangers and each other. And I think the opening of the show where Ilana is video chatting with Abbi and is having sex at the same time, I think that just shows that Ilana isn’t afraid to show literally her full self to anyone. She’s not afraid of who she is.

Ilana: People multi-task. People are mad multi-taskers, like many screens at once.

Are you working on separate side projects?

Abbi: We actually both have side projects. For the time being, obviously, this is our number one priority. But we both have other web series and writing projects.

Ilana: We have a lot of fear and that motivates us to keep creating other work.

Meet the Broads of ‘Broad City’