Requiem for a Sheitel Makher 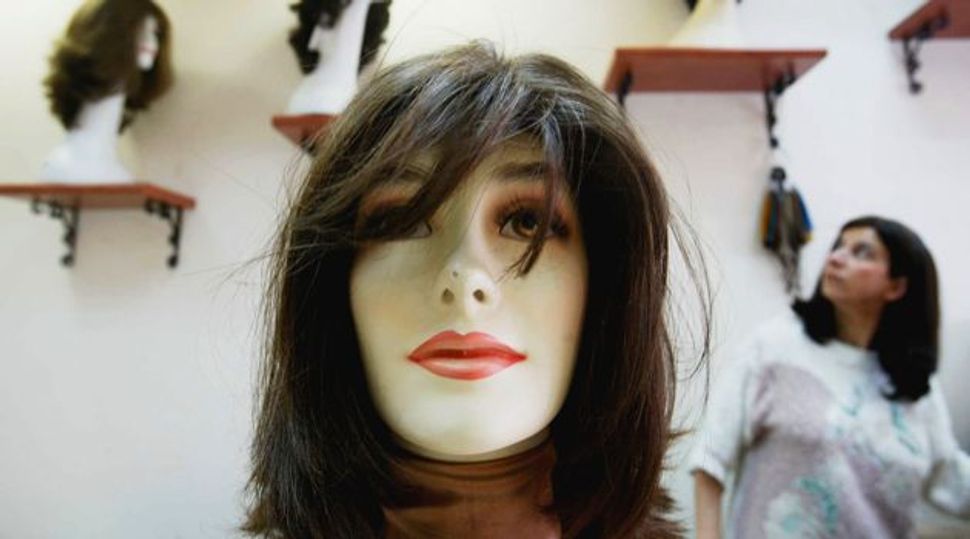 Sheitels, or wigs for Orthodox women, come in different colors and styles to match women’s preferences — they are short and neat, long and wavy, matronly and sexy. Maintaining the freshness and vibrancy of a sheitel requires a skilled sheitel makher, a wig stylist. It’s a demanding job that calls for loads of patience, talented hands and a predilection for chatting about everything — from the weather to the people you know who are currently pregnant — all while standing over someone’s head. It’s also demanding because women want to look their finest even when they cover their hair or shorn heads. The color, length and quality are all important factors in ordering a sheitel, and the sheitel makher plays a central role in this decision-making process.

Of the many hats I wore in life, my time as a sheitel makher was probably the least signficant. In the summer of 2005, after I quit my job as secretary to the clerk of the Village of Kiryas Joel and after I gave birth to my son, I took up courses in wig making to supplement my husband’s meager income. This was an obvious choice for me: wig styling is a lucrative business in the Orthodox and Hasidic communities, and sheitel makhers, as they are called, are in high demand. Additionally, professional opportunities are not readily available to young women with no high school diplomas. Many Hasidic women take courses in wig making and run profitable businesses out of their basements.

As with every new business, mine started out with a handful of customers — mostly relatives and friends that I coaxed into trusting me with their $300 wigs. The business never really took off the ground, probably because I did not feel it was my calling. After I completed my six-week course in wig cutting and styling in 2005, I spent two years combing through wig magazines for endless colors, shapes and styles, searching for the perfect fit for my customers. Once a customer’s wig arrived, I would cut it while she wore it on her head, style it and send her on her way. I saw many a shorn head in those days. One woman removed her terrycloth turban to reveal a head full of hair, apologizing profusely and begging me not to reveal her secret. She knew I was trustworthy, she explained, acknowledging what I suspected she already knew — that I too had a secret beneath my turban.

The sheitels I combed were mostly made of cheap synthetic hair. This was after the brouhaha in 2004 when hundreds of human hair wigs were burned after rabbinical authorities in Israel discovered they might have originated from worshipping Hindus. Many pious Hasidic women switched over to synthetic hair after that incident, as did most of my customers.

Contrary to popular belief, many Orthodox women don’t wear overpriced glamorous wigs that are meant to look better than the real hair they’re covering. This is especially true for women in the Hasidic world who, outside of Chabad, wear short sheitels made of a blend of human and synthetic hairs. Some wear all-synthetic, others wear all-human, but none pay exorbitant amounts to look like they just walked out of a Hollywood salon. But Hasidic women do pay attention to their looks. Their standards for fashion and beauty may be radically different from those of secular women, but they still place importance on their appearances.

Sheitels need maintenance, much like natural hair does. Women would bring their wigs to me in a plastic grocery bags to wash, blow-dry and style after a few weeks of wear. Women typically own three wigs each: one for every day, one for Shabbat and holidays and one for special occasions. I urged my customers to wash their everyday wigs after two to three weeks of wear, but some clearly went longer and would send them in all knotted and smelling of chicken soup and cholent. I toiled away washing and conditioning, blowing and snipping and trying to please my customers. But I struggled to find pleasure in my work, in making small talk with my customers. It turned out I had little confidence in the job I was doing and little desire to build it. This was one of those ventures that you take on almost spontaneously and just as quickly lose enthusiasm to see it through. In 2007, I closed the venture after I gave birth to my daughter.

My fierce determination is a point of pride for me. So when I invested financially and emotionally in a business that I dropped as quickly as I took on, I wished to seal its memory in a box. I suppose this is a requiem for the sheitel makher in me.

Requiem for a Sheitel Makher