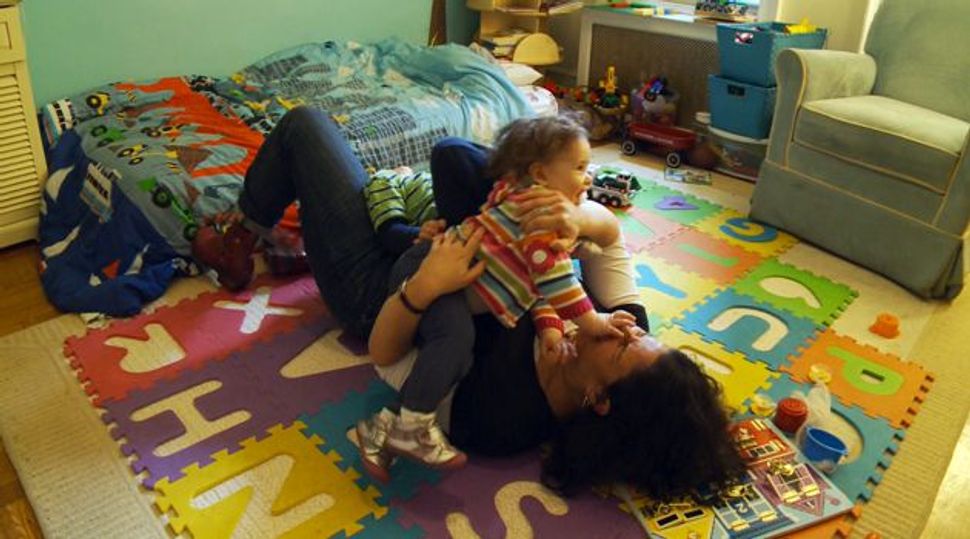 Courtesy of Diva Communications// Rabbi Felicia Sol with her children

The new film, “All of the Above,”, explores what happens when a single, Jewish clergy member wants to become a mother. The documentary, produced by Diva Communications, features interviews with Rabbi Lisa Gelber, an associate dean, at the Jewish Theological Seminary’s Rabbinical School, Rabbi Julie Greenberg, from Congregation Leyv Ha-Ir in Philadelphia, Batya Schechter and Rabbi Felicia Sol of B’nai Jeshurun in New York, among others, and includes interviews with writer, activist and Ms. Magazine co-founder Letty Cottin Pogrebin. Diva Communications Founder Debra Gonsher Vinik describes the film as being for “anyone who is a mother, wants to be a mother, or has had a mother.”

Gonsher Vinik has produced and written sixteen documentaries of which eight have been nominated for Emmy awards and three have won the honors: “And The Gates Opened” (2007), “The Eternal Light” (2008), and “Yearning To Belong” (2009). In the last few years, Gonsher Vinik has concentrated on interfaith documentaries highlighting social justice issues. She is a Professor and Chairperson of the Communication Arts and Sciences Department at Bronx Community College of the City University of New York. Her next project is entitled “The Beauty of their Dreams” and will explore how faith is playing a crucial role in the education of girls. Gonsher Vinik talked with the Sisterhood’s Chanel Dubofsky about “All of the Above.”

Chanel Dubofsky: Running through the film is this idea of “the dream” — a partner and kids, the traditional nuclear family, and having to mourn it when it doesn’t happen. Why do you think the notion of “the dream” runs so deep?

Debra Gonsher Vinik: It does run deep. I don’t know that Felicia and the others thought about it, it was just a given that it was one of those things in life that you would do — it doesn’t dawn on you that it won’t work out. It didn’t even occur to Felicia, etc. that it wouldn’t go that way. I assumed that I’d get married and have children, but actually, the idea of being with someone was more important than the idea of having children. I heard the “you have a better chance of getting hit by lightning than getting married,” blah blah. At some point, I just said, this is my life, I like it a lot, I’m successful, I love being by myself. It didn’t work out the way I thought, but so be it. I gave up, I just said, it’s not going to happen. You have to come to accept and find the joy in your life. (Of course, six months after I gave up, I met my husband.)

In spite of the pervasiveness of the dream, the women in the film have rejected the notion of “settling” for a Jewish partner.

I would hope men in their 20’s, with all these years of egalitarian perspective, would be less threatened by women with education, power, etc, but what men would say they want and what they want are two different things. It has to do with being comfortable in your own skin. If you’re not, everything is going to be a problem.

The Jewish community doesn’t have a great track record of dealing with powerful, single women. Do you think the fact that the women in this film are/want to be mothers makes them more palatable to mainstream Judaism?

It’s not uncommon to be a single mother, whether by choice or by circumstance, but what fascinated me was this question of what happens when you’re a single mother and your job isn’t one where you’re only responsible for yourself, where people are looking to you for guidance, for moral fiber. People might say they’re fine with it, but what do they say when it’s their rabbi?

Once the single rabbi becomes a mother, people put her into the “mother” compartment, and they don’t have to think about the rabbi compartment. Felicia said that when she’s at evening events, people always ask her where her kids are. You would never say that to a male rabbi with kids.

The pre-airing buzz for this film has been like none other — and yet we had to fund it ourselves. It’s very telling; foundations don’t want to hold up the single, female rabbi parent, they don’t want to be seen as condoning it, as though it were a reasonable choice, As Letty said in the film, the expectation that you have to be in a nuclear family to lead a congregation is misplaced. I think, don’t start decrying the downfall of Jews, rejoice if women want to have Jewish children.

Talk about the process of making this film.

It was really b’shert. I knew Lisa (Gelber), and one day we were having an interview, and she said, out of context, “Did you ever notice how many single, attractive, educated Jewish women on the UWS who have children?” I said I could name quite a few. I met Felicia through Lisa, and it turned out that Batya was in a documentary on Jewish music that I had done 10 years ago. I didn’t know she’d been on this journey. At first, she didn’t want to do it, but I’m thrilled that I pursued it. Her story is essential to the film, it’s the piece that grounds all of it. It’s still being written, it makes the film not Pollyanna-ish, like it works out for everyone. It’s about realizing that you may not get everything you want, but you can work towards getting some part, and that part will fill you up very nicely.

All of the Above airs on ABC affiliated stations starting this month. You can check the broadcast schedule here.