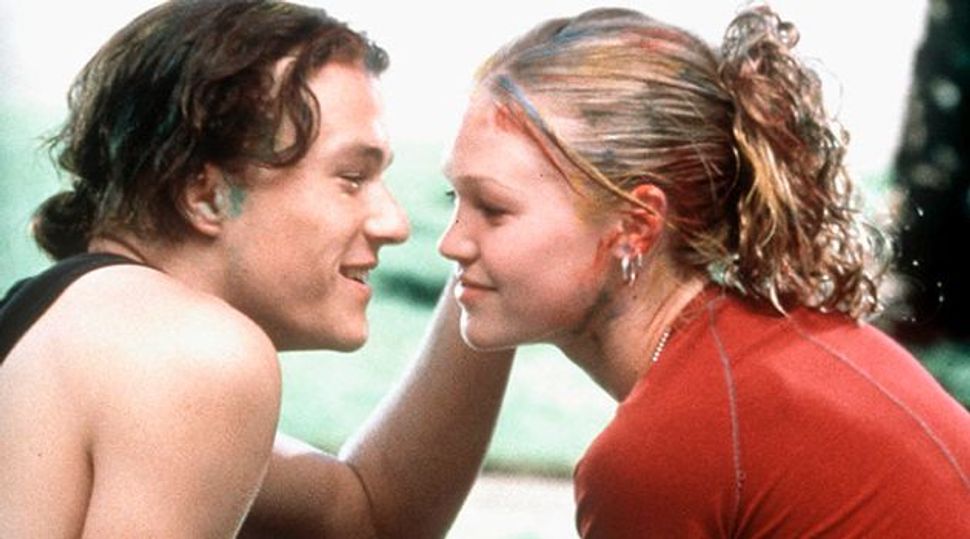 I would be remiss if I let 2014 whoosh by without pausing to commemorate the 15th anniversaries of three of the most seminal coming-of-age stories of our time. I’m referring, of course, to “She’s All That,” “10 Things I Hate About You,” and “Never Been Kissed”: the trifecta of teen movies from 1999, a banner year for helping to perpetuate the misinformed fantasies of hormonal adolescent girls throughout the world.

I had forgotten about this momentous anniversary until my friend Frimet Goldberger, who regularly illuminates what it’s like to find your way in the world after an insular Hasidic upbringing, wrote about her regret at never getting to attend a prom, “that quintessentially American rite of passage.”

I didn’t grow up Hasidic like Frimet, but I didn’t get a prom either. Nor did I get to wear my boyfriend’s varsity jacket as I floated through the halls of our high school, reform the bad boy into the sensitive soul he always was, or enjoy a makeover that literally just meant taking my hair out of its ponytail and putting on a more flattering shirt, instantly catapulting me from giant neb to major hottie. I didn’t get to do any of the things portrayed in those movies, and for a boy-crazy youth who grew up in a strictly-regulated home on the outskirts of the yeshivish community in Flatbush, Brooklyn, these cinematic plot devices served as the collective outlet of all my ideas about what it was like to be a “normal” teenage girl in modern-day America.

Not that I was necessarily allowed to go to these movies: despite being 13 years old, my parents were inherently suspicious of any movie with a racier rating than G (even PG raised eyebrows). PG-13 was not up for discussion. My friends from school and I instead colluded to come up with a mutual lie that we told our parents — we usually said we were going bowling — and then we’d sneak to the movie theater and feel very sneaky and grownup as we attempted to purchase tickets and overpriced candy and soda as nonchalantly as possible.

As we sat there on the gum-pocked seats of the local theater clad in our Skechers and cargo skirts, we fell in love with Freddie Prinze Jr., the jock with the heart of gold, who fell for Rachel Leigh Cook as art-nerd Laney Boggs in “She’s All That”; we swooned at Heath Ledger’s crooked grin and Aussie accent as he verbally sparred with sharp-tongued and quick-witted Julia Stiles, who read Sylvia Plath and listened to Riot Grrrl music in “10 Things I Hate About You”; and we tried to make sense of whether high school popularity was really as fluid as “Never Been Kissed” suggested and how on earth schoolteacher Michael Vartan could fall in love with Drew Barrymore, who he thought was his student (wildly inappropriate even with pre-2014 lens). Amid these romances, we noted with shock what appeared to be regular high school shtick: flirtations and hookups galore, sex-ed with bananas (we thought we knew what those were stand-ins for, but we weren’t positive), disrespectful asides from surly teens and casual bantering between students and teachers. All these phenomena were almost inconceivable to us, so segregated were we from co-ed environments and also because we referred to all our teachers in third person as outlined in our derech eretz handbook (which detailed the proper, Jewish way to comport ourselves in public).

Sometimes, it was easy — and often suffocating — to imagine that the world started and stopped right there in our immediate Orthodox Jewish community. It was a lovely world at times, but a very, very small world. These films showed me and my friends what life was like not only for teens throughout most of the country, but for most of the teens in our city. Though sometimes the “outside” world looked like a giant minefield fraught with danger, it was also teeming with vibrancy, possibilities and also so many cute boys. I can’t speak for my friends at the time, but I was green with envy and began to nurse a deep resentment for what I saw as a sheltered upbringing that lacked the normal American girl experience I craved.

I’ve watched those movies semi-regularly since then, as I often engage in wistful nostalgia for the pastimes I voraciously consumed in my youth, so very angst-filled back then but in reality, so very simple compared to adulthood. A lot’s changed, obviously: Heath Ledger, so wonderfully vibrant as a heartbreaking rebel, and Paul Walker, glorious as a villainous sidekick, are no longer alive. Freddie Prinze Jr. has kids with Buffy. Drew Barrymore married a veritable yid. As for me, I’m no longer bitter at not growing up in the kind of world depicted in those movies. I’ve made many American-as-apple-pie friends since then who tell me those movies didn’t quite capture their actual lives. I can see some of the positives of growing up in a world with limits and a lack of knowledge about the more sordid aspects of an anything-goes environment. And, like Frimet, I’m excited to co opt some of the less seedy “rites of passage” that the more stringent communities of our youths eschewed. (Err, I’m invited to that prom you promised to one day hold for your fellow ex-Hasidic girls, right Frimet?)

Maybe I didn’t get a high school dance, or have my sweaty boyfriend wrap me in a bear hug after scoring a touchdown in the big game. But at the very least, I got to sit there in a raucous movie theater next to my similarly wide-eyed partners in petty crime, awash with wonder at this world that was so very close to us — but still so completely out of reach — and dream.