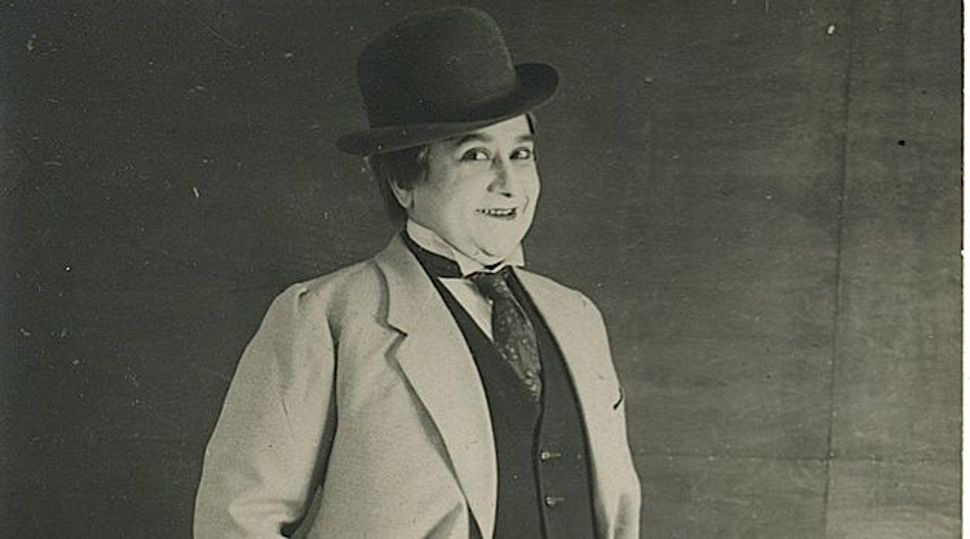 The image of early 20th century itinerant member of the Broder Singers (and Yiddish drag king) Pepi ‘Peshe Khane’ Littman (1874-1930) seen here as ‘the griner bucher’ (the inexperienced bachelor) calls to mind the bawdy Yiddish saying: es zol dir dunern in boykh un blitsn in di hoyzn (may you have thunder in your belly and, — more importantly perhaps — lightning in your pants.)

Electricity was precisely what Pepi brought to the then nascent field of Yiddish women performers: either in drag as a young hasidic man costumed in a long black satin coat, high peaked silk yarmulka, white knee-socks and breeches, or as a dandy bachelor, sumptuously filling out a handsomely tailored three piece suit. Pepi was a charming transgressive star delivering original Yiddish lyrics and drawing fans from literary circles, including those based around the “grandfather” of Yiddish literature, Mendele Moykher Sforim.

Her famous oylem habo ditty brought sex to the staid and the holy in the shtetl where a rabbi decides to ‘help’ a barren woman conceive — so he can enjoy a piece of the ‘world to come.’ With Littman’s help it becomes a term for, well, lightning in your pants.

And she wore the pants too, as leader of one of the most popular travelling Yiddish acting troupes in Eastern Europe performing in the wine cellars, inns, restaurants and all manner of populist dives of Austrian Galicia, Romania, Russia and even Vienna. Blessed with a husky low voice, Pepi’s repetoire covered topical events as well and was in turns melancholic, ribald and satirical.

Although married, Littman’s theatrical career and her onstage wearing of pants almost exclusively, was outside the pale of acceptable social behavior for Jewish women of the era. Her pants-wearing shand has historical referents for women, on and off the stage and she’s in great company. As early as 1867 Annie Hindle was famously popular in NYC as the first male impersonator, and ‘the divine’ Sarah Bernhardt performed Hamlet in 1899.

Off the boards, women have had a long fight for the right to wear pants, something still seen as lewd, forbidden and even a punishable act in many religious practices, including Orthodox Judaism. A first citing of the female form in a pair of pants can be found in ancient Greece as early as 470 B.C. but it took until 1972’s Title IX for dresses to no longer be mandatory dress code for young women in American high schools. In 1919, when Pepi was on the road in Eastern Europe in drag, Lisa Capetillo in Puerto Rico was imprisoned for wearing pants publicly. It took the eventful year of 1969 for Republican Rep. Charlotte Reid to grace Congress with a pair. Hillary Rodham Clinton positively sizzles in the groundbreaking official White House portrait of a first lady in pants. Closer to home, NYC’s own Jewish lesbian political activist Yetta Kurland, a contemporary doppelgänger for Pepi, handsomely matches Littman’s dandy sartorial style.