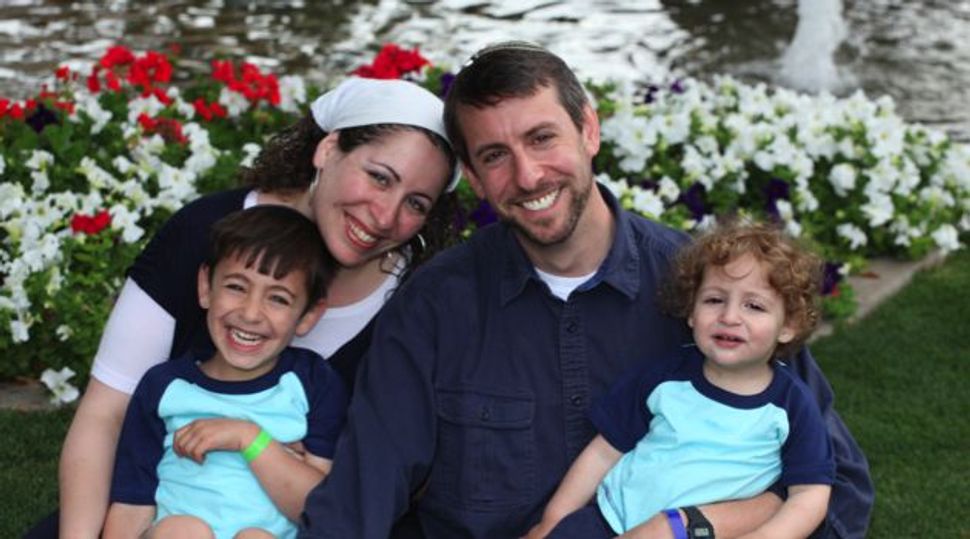 Deborah Meghnagi Bailey and her family

Here’s a scene from my life last week: It’s 9:30 pm. I’m lying on my bed, fully dressed, talking to my husband, who is ready for bed. We weren’t supposed to be here, tonight. We were supposed to be in the Galilee, in a beautiful cabin with its own private pool and Jacuzzi, with a massage chair in the bedroom and a hammock rocking gently in the garden outside. We escape there once a year, without the kids. It’s an oasis of calm and relaxation and peacefulness.

We’ve been looking forward to our getaway for a year. We were supposed to leave this morning. But last night, rockets were fired toward Tel Aviv. We live in Jerusalem, not Tel Aviv, and we haven’t been attacked yet, but there’s always the first time, so how can we leave our boys? What if it happens while we’re away? My mother-in-law is babysitting, and competent as she is, she’s never lived here through sirens, and how can one person get two kids to a shelter downstairs within 90 seconds, if they’re asleep when the siren goes off? We live in an older apartment, so we don’t have a secure room. The building’s shelter is not far, just eight steps down and across the hallway, but still.

We kept on planning our trip through the waiting and praying to find out if Eyal and Gilad and Naftali were alive, and through the grieving when we found out that they weren’t. We kept on planning after Mohammed Abu Khdeir was murdered so brutally and riots began spreading through our city. But once the rockets started falling, we had to cancel. It’s not just the actual danger, it’s the trauma. We can’t leave our five-year-old to process having to run to a shelter without us around. So we’re lying here, talking. I’m on edge. We know what the plan is — I’ll grab the baby, my husband will grab our five-year-old. I’m desperately tired — our little one has been teething and our big one has been having nightmares and we’ve had quite a few interrupted nights of sleep — but I’m scared to go to sleep because I worry I might not hear the siren. Usually we keep our window closed against the din that assails us from noisy neighbors, but now we have it open so we can hear better.

A siren wails. We fall silent, look at each other and spring into action. My husband reminds me, don’t worry, we have 90 seconds. I run to the baby’s room, opening the door softly, and gently pick him up. He stirs, wakes. I soothe him while hurrying for the front door. My husband is carrying our groggy five-year-old, reassuring him. We grab our phones and head for the shelter. The last time I had to do this, I was seven months pregnant with the toddler I am now carrying in my arms.

We’re not the first family into the shelter; one neighbor is there already. I sit down on a couch, still holding my son, who is calm. I’m shaking. I’m also glad I’m still dressed. More neighbors turn up. I hear a distant boom. I don’t recognize one of the families who enters the shelter. It turns out they are staying in their friends’ rental apartment upstairs. The mom is Finnish, a dentist, volunteering here for a week. The dad speaks and I hear a familiar accent. It turns out he’s a fellow Brit. Their three blond kids seem calm, sitting on chairs in their underwear, clearly having been roused from their beds. Not quite the vacation they had been expecting. She and I exchange reassuring words while our eyes express, silently, how scared we are for our children. Once I stop shaking, the camaraderie is reassuring, enjoyable. I’m actually sort of glad there was a siren, so I can know I was right not to go on our vacation. I wish I was up there, though, with the pool, and the silence, and the serenity.

When we go back upstairs, after the requisite 10 minutes, the baby goes back to sleep almost immediately, but our five-year-old takes longer. I have to explain to him why we went downstairs — because the walls there are stronger. My ever-curious son wants to know how they are stronger. I start describing engineering details I’m really not clear about. I sing him another round of our goodnight song, in which Jacob, our forefather, prays that the angels who watch over him and guard him from evil should also watch over his children and bless them. Please, please, I think.

I’m still exhausted, more exhausted, but I feel like I can’t give myself permission to sleep. Usually, I’m a light sleeper; when the baby wakes up and cries in the night, I hear him immediately. But sometimes, when I’m really really tired, I hear nothing. I wake up in the morning convinced the baby slept through, and find out my husband went to him when he cried. I’m so tired now I know I’d sleep through a siren. Part of me thinks we’ve been through it, that this is it for tonight, and I can let go. The other part thinks, but what if there’s another? It is after midnight before I can allow myself to sleep. I have more clothing on than I’d normally wear in this heat, and I keep a lamp on so that we can see our way around the apartment if another siren goes and we have to move fast while drowsy. I sleep fitfully, toss and turn. I am awake before six.

There are little things that change. I’m a freelancer who works from home. Most days my husband drops both kids at kindergarten and daycare so I don’t have to leave the house. I am often at the computer, working, still wearing my pajamas; sometimes I only get dressed after midday, when it’s time to go and pick up my little one. Not now; now I need to be dressed in case I have to go to the shelter. I won’t take a shower if I’m the only adult in the house — someone has to be around to hear the siren. My older son is in a kindergarten that has a shelter, so he’s okay, but my younger son is in a daycare at someone’s house; I doubt his metapelet (caretaker) could get him and five other toddlers down three flights of stairs to the shelter in time. She tells me her adult son is home on vacation; between that, and the fact that I’m irrationally convinced that they won’t send rockets to Jerusalem during the day, I decide to keep sending him. I have to keep working, after all, or I won’t meet deadlines, won’t get paid. It’s not easy to concentrate, though. There is a constant low-grade anxiety thrumming through me, that spikes when I hear something I think is a siren, or read some opinion piece on where the war is headed, on where Israel is headed. During the intifada, I survived psychologically by disengaging, by not reading the news, not listening to the radio. I need to do that now, but it’s harder, when the danger is in our homes, when I have to remain alert to protect not just myself, but my children. When I have so much more to lose.

Deborah Meghnagi Bailey is a freelance writer and editor.

A version of this article first appeared on the web site of the Jewish Federation of Greater Philadelphia.