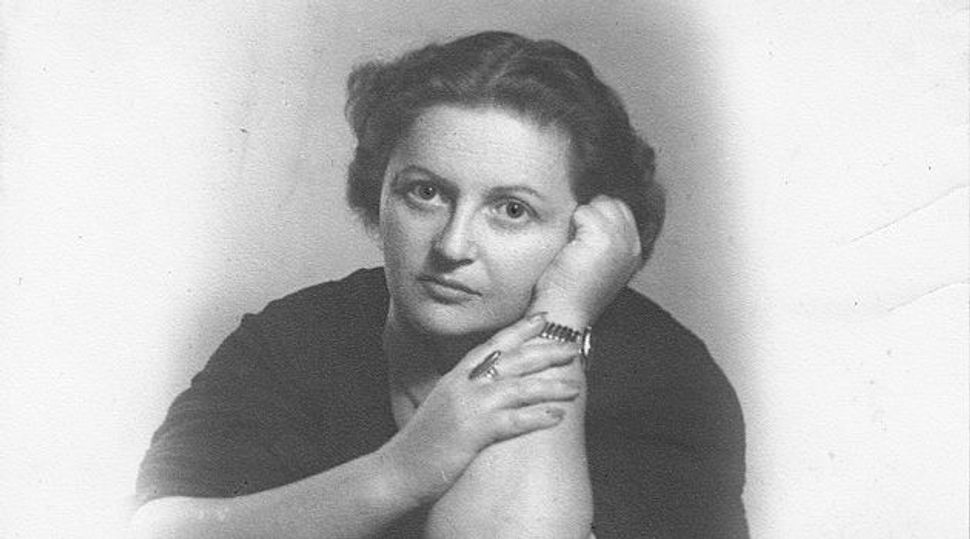 Copyright Forward Association Welcome to Throwback Thursday, a weekly photo feature in which we sift 116 years of Forward history to find snapshots of women’s lives.

Vera Hacken was the Odessa-born memoirist of a Czernowitz childhood, and an early novelist of the intricacies of life under the Soviet Union’s police state apparatus — but much of her life remains somewhat shrouded in mystery. So when we found her dreamy photo in our archive and felt ourselves hooked in by her dark-eyed melancholic scrutiny, we were determined to unveil some of the hinted-at inscrutability.

Luckily she does have an entry in Berl Kagan’s Lexicon of Yiddish Writers (1986). It reads like the scene of a terse briefing in a 1950’s noir detective film with its ‘just the facts ma’am’ line of inquiry.

Still, we gratefully reaped those gleanings: The future Yiddish multi-talented novelist, poet, lyricist, memoirist, essayist, director, playwright, and German and Russian translator was born in 1912 in Odessa. Hacken spent her childhood years in Czernowitz, epicenter of a thriving Yiddish literary and cultural scene, where acclaimed Yiddish fabulist and educator Eliezer Shtaynbarg was her teacher. She studied theatre, establishing herself by 1938 as a director in Bucharest’s and Munich’s kleynkunst theatres, which are sometimes also described as literary cabarets.

She escaped to the Soviet Union during the war in 1941 with her husband, Yiddish composer and physician Emmanuel Hacken. She briefly lived in the Bavarian resort town of Garmisch-Partenkirchen, which hosted a post-war convalescent center, from 1947 until arriving in New York City in 1951.

She published in a variety of Yiddish journals including Afn Shvel and Tsukunft and in 1969, in book form, a Yiddish memoir of her youth under Shtaynbarg’s stirring creative influence. In 1990, a collection was published posthumously of her short stories, essays, poems and a novella entitled ‘Stantsye Grafskaya’ detailing, among other things, the stresses, intrigues and even romances taking place under the sadistic reign of the NKVD who were responsible for enforcing Stalin’s reign of terror. An ongoing project in the early 1980’s was her editorial supervision and writing of authoritative introductory essays for a series of Yiddish classics published in German by Weitbrecht of Stuttgart.

Yet another colleague, whose mother was also a Yiddish poet, had similar hazy childhood memories of his family visiting Hacken.

Perhaps her ghostly afterimage was our lucky amulet because yet another Forverts colleague who also knew little about her, had received Hacken’s library upon her death in 1988. Comprised of manuscripts and personal papers, it includes some correspondence with other writers, largely in response to her requesting to be reviewed by them. There was even the requisite letter from Yiddishland’s preeminent linguist offering his analysis of her particular Yiddish word choice and stylings.

In the spirit of the New Year soon upon us, we offer up a humble prayer that she merit cataloging, making her work available to the public and perhaps even translation into English, that storage boxes of her creative work not be the epilogue to the book of her creative life and that she be inscribed for a sequel.