The Bat Mitzvah Girl Who Made Kotel History 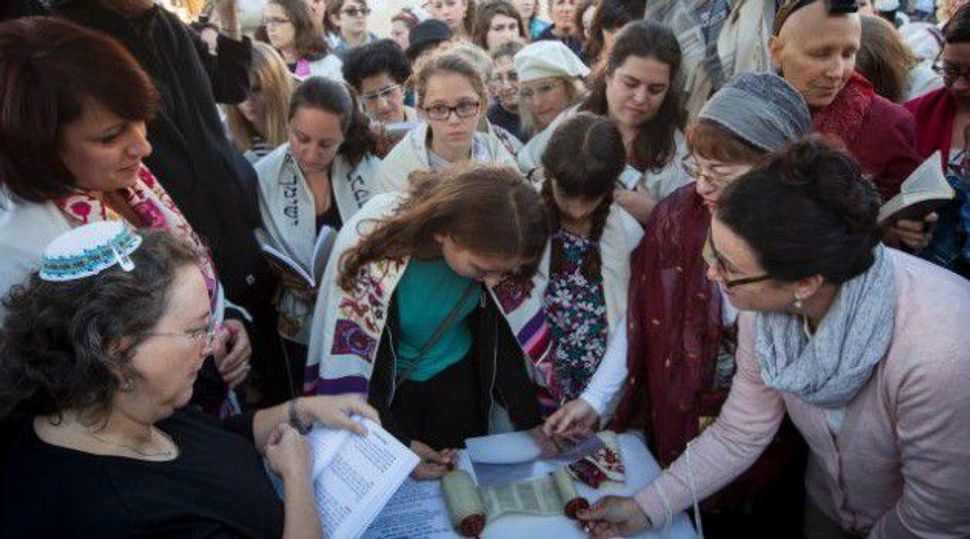 I am sitting in front of my computer, talking via Skype with three women in Israel — Irina Lutt, her 12-year-old daughter Sasha, and Shira Pruce — who are kicking back after a day of school and work. Sasha made history at her bat mitzvah last week when she became the first female to read Torah at the Western Wall in 25 years. The fact that she’s a celebrity doesn’t seem to have registered with her. “You made the New York Times!” I tell her. She looks quizzically at her mother; she has never heard of the Times.

Shira, who is translating for us and trying to get Sasha to eat something, is director of public relations for Women of the Wall (WOW), the organization that has been fighting for a quarter century to secure the rights of women to pray at the Kotel. She and Irina know what a hard-won victory this bat mitzvah was for WOW and for the rights of women in Israel.

To begin with, they had to smuggle in a tiny Torah, because women have been aggressively and sometimes violently blocked from reading Torah at the Wall. Surrounded and sheltered by a circle of women, Sasha had to use a magnifying glass to read the text. She shrugs off my comment that this must have been tough. “I knew it really well,” she says.

It’s been quite a trip for Irina and Sasha. In 2003, Irina left Samara, Russia with 1-year-old Sasha and settled at Kibbutz Adamit, near the border with Lebanon. She was not really connected with the Jewish community or Jewish practice. It happened that Valentina Tumelina had also moved to Adamit from the former Soviet Union — in her case, from Chernigov, Ukraine. She was a graduate of the first training program organized by Project Kesher in Israel (PKI) — a pluralistic organization that connects Jewish women with each other and their heritage — who went on to become coordinator of PKI’s Jewish Education Program.

Valentina told Irina about Project Kesher and how it had inspired her to connect deeply with her Judaism. In fact, she said, Project Kesher was hosting an introductory seminar for Russian-speaking immigrants. Why didn’t Irina come with her?

“I had been missing Judaism in my life,” Irina told us. Whether as the result of the sense of community that she found at the seminar, the pleasure of celebrating Kabbalat Shabbat for the first time, or the message that she could make a difference in Israel, she was hooked. She told me, “That weekend I came back to a place that was 100% myself.” Later, at a Project Kesher leadership seminar, she learned “to step forward and put my ideas forward,” and found herself agreeing to act as PKI’s national coordinator, second to its director, Lesley Sachs.

Irina went to a Seder that PKI conducted, and then went home and made her own Seder for herself, her mother and Sasha. It was the first Seder her mother had ever attended and their first Jewish observance as a family.

Something clicked for Irina when she saw a video about Anat Hoffman, leader of WOW and Board President of PKI. Hoffman said, “This is all of our struggle.” Lesley Sachs and Irina began going to the Kotel for Rosh Hodesh services with her. Sasha went along, anxious for her mother because women were being arrested at times for wearing prayer shawls at the Wall. Sasha liked the services and kept coming back.

Last month Sasha’s photo was featured with those of three other girls on poster ads WOW ran on the sides of Egged buses in Jerusalem, encouraging girls and their families to celebrate bat mitzvah ceremonies at the Kotel with WOW. The ads read in Hebrew: “Mom, I want a bat mitzvah at the Kotel, too.” The buses carrying the ads were vandalized by ultra-Orthodox men. The posters were slashed and defaced.

This didn’t stop Sasha from agreeing to be the first bat mitzvah to read Torah at the Wall. It was the culmination of a journey that took her from Russia, where for decades Jews had been forbidden to practice their religion, to a Project Kesher seminar in Israel, to the Women of the Wall, to the moment when she leaned over the tiny Torah and began to read.

“I was excited,” Sasha says, flashing us a little smile.

The Bat Mitzvah Girl Who Made Kotel History