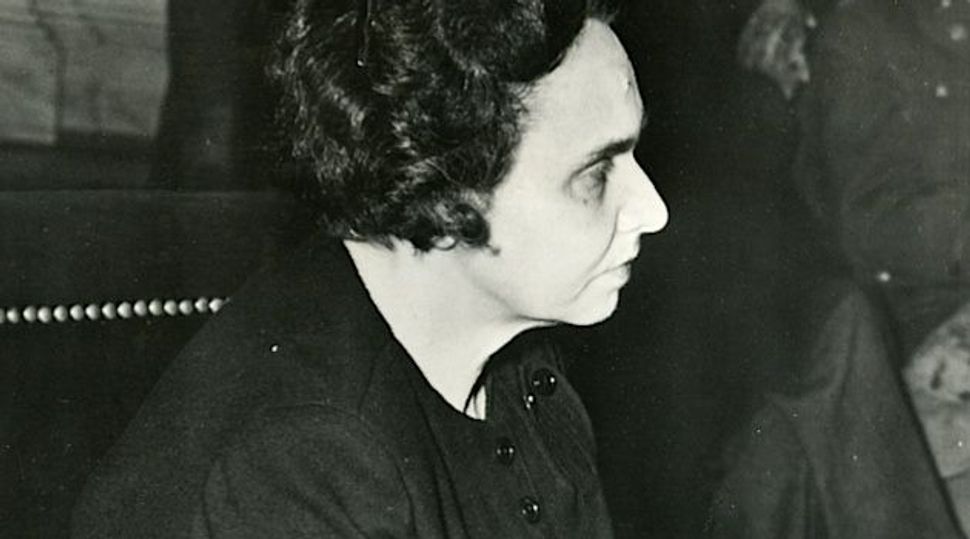 Seemingly waiting for her thoughts to fuse, Ruth Fischer’s photo in our archive depicts her with notepad in hand at the House Un-American Activities Committee in 1946, in a painfully dull side profile for a former revolutionist. And yet, Fisher’s blazing life force, absent in such a quotidian image, hovers in the imagination like an afterimage with the power to warp the very negative used to create the print.

In 1948, only two years after this image was made at the hearing, Fischer authored a vast tome entitled “Stalin And German Communism.” Published by Harvard University Press and ranging 687 pages, it was received as an authoritative work on German communism and its Stalinist influences, and was considered both readable, and even riveting by some.

Ruth Fischer was born Elfriede Eisler to a Jewish father, a philosophy professor at the University of Leipzig, and a Lutheran mother who supplemented the family’s income with work as a domestic aide. Along with her brothers, the noted film composer Hans and Gerhart, also an activist, Ruth is credited with founding the Austrian Communist Party in the early years after World War One. But then, in 1919, after reportedly incensed at criticism of her as being too rightist, Fischer and brother Gerhart departed for Berlin where she led the German communist party, was elected to the Reichstag and remained active there, despite burgeoning internal party tensions.

Her world careening once more, she was soon considered too far leftist for the party’s emerging Stalin-oriented totalitarianism. Fischer and her lover, fellow writer and political leader Arkadi Maslow, born to a Jewish merchant family in Ukraine, met with Trotsky to coordinate their resistance to this type of control.

At one point, having denounced the party leaders for opportunism, Fischer was summoned to Moscow. She was placed in the notorious holding pen for party members requiring ‘discipline,’ the Gorky Street Hotel Lux, which later also became home to those fleeing Hitler’s early persecution of German communists until they were purged by their Soviet handlers.

By 1926 Stalin himself ordered her expulsion from the party. Managing miraculously to get herself released from Moscow, she returned to Berlin serving in the Reichstag until fleeing Hitler in 1933. Setting out first to France then Spain and Cuba, she was eventually granted entry to the United States in 1941.

Arriving in New York City in mourning, having lost Maslow in Cuba where he was murdered by the Soviet secret police, Fischer testified and denounced her brother Gerhart who stood accused of being the ‘number one’ communist in the US. He was convicted but escaped back to the newly formed East Germany once bail was paid, joining their sibling Hans who had similarly been deported earlier. Both led public careers there. Fischer’s own beliefs and actions shifted radically with time and reportedly she was a founding member of the ‘Pond,’ a spy network engaged in espionage for the US between 1942-1955, working as a key agent under the code name ‘Alice Miller.’

Eventually she moved one final time to Paris, where she died in 1961.

With an intellectually driven action packed life making any spy-thriller-action film seem banal, if not drab, Ruth Fischer’s archival papers at Harvard are a treasure trove of correspondence. They include writing by a wide range of personalities including British television journalist Alistair Cooke and famed anthropologist Margaret Mead. The papers to the public — and anyone interested in writing a great screenplay, based on a true story.