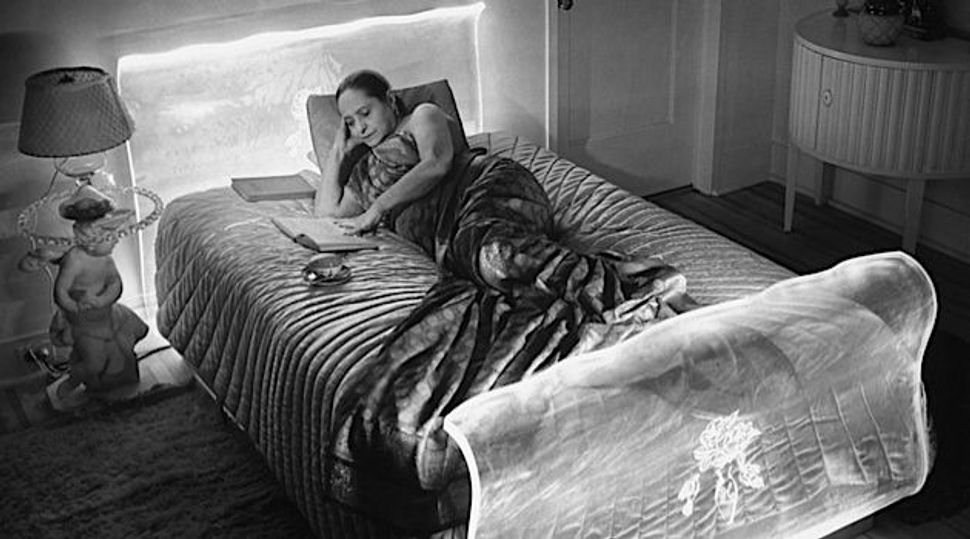 Helena Rubinstein reads in her bed in the late 1930s. Copyright Getty Images

My first introduction to Helena Rubinstein came in the form of a small, white tube with a red and fuchsia logo that was no bigger than my thumb. It was waterproof mascara, hidden away in my mother’s bathroom drawer. She never actually used it, and it looked different, older than all of the other mascara she had. As a 5-year-old in the early ‘90s, I was fascinated by its unique packaging, clearly from another era.

It wasn’t until I visited “Helena Rubinstein: Beauty is Power,” the current exhibition at the Jewish Museum in New York, that I learned that my mother was wrong. Helena Rubinstein cosmetics haven’t been sold in the United States since 1985 (that is one old tube of mascara, Mom) but the company continues to thrive in Europe, Asia and Latin America.

Because of this, many people under the age of 40 don’t know who Helena Rubinstein is, and many people over 40 may not remember her impact. “She had this incredible influence but has been pretty much been erased from history, so this exhibition is an effort to rectify that erasure,” curator Mason Klein said about his inspiration for the show at the Jewish Museum.

Madame, as she was known, literally and figuratively changed the face of the beauty industry. Throughout her over 60 years of work in the cosmetics industry, she encouraged women to embrace their individualism. She didn’t believe there was one kind of beauty, and this was reflected in the way she lived her life as not only an entrepreneur but also as a patron of the arts and a philanthropist.

If you are among those who have not had the pleasure of being acquainted with Madame thus far, or if you’d simply like to remind yourself of her amazingness, here are some things you should know.

1. She pushed against the status quo.

Born Chaja Rubinstein in Krakow, Poland in 1872 to Orthodox Jewish parents, her father forced her to leave home after she rejected an arranged marriage at age 16. She emigrated to Melbourne, Australia in 1896, where she lived with an aunt and founded her first salon, Maison de Beauté Valaze, in 1903. Not many details of her early life are known, and she kept much of it, including her actual year of birth, a mystery. (Some sources say it was 1870.)

2. She stood up against anti-Semitism.

Rubinstein was not a practicing Jew, but nevertheless faced obstacles throughout her life because of her Jewishness. “She had to be accepted in places like London and Paris as an Eastern European Jewish woman,” curator Mason Klein said. “It was quite, quite difficult. She had to fashion and create an identity.” Her husband, American writer Edward Titus, helped her do this by introducing her to members of European high society and offering them free beauty treatments. This and a commission of portraits by several well-known artists at the time established her credibility.

After much success in New York, she sought to purchase an apartment in a building on Park Avenue in 1941 — but it didn’t allow Jews. She bought the entire building and moved in to the apartment of her choice.

After much success in Europe, Rubinstein founded her first American salon in New York in 1915. The move was largely due to World War I. Her work became highly influenced by the 1913 avant-garde Armory Art Show and a 1911 women’s suffrage rally. Makeup had previously been relegated to prostitutes and actresses, but women began wearing lipstick as a symbol of empowerment at the dawn of feminism, the rally included. Continuing to move against society’s grain, Rubinstein sought, Klein said, “to be edgy, to be avant-garde and to distinguish herself as willing to try anew,” as many women were starting to do at the time. Rubinstein believed that each woman had specific makeup, hair and personal style that they should develop on their own instead of adhering to snobbery and the status quo. Klein said this “was remarkable for a woman to advocate at a time in the world when nonconformity was so discouraged.”

4. She was an arts collector and patron.

“When you look at the diversity of her collection, you realize how she truly wanted everyone to find out what was exceptional about them,” Klein said. The variety of artworks on display in the exhibition ranges from sketches by Pablo Picasso to paintings by Max Ernst, as well as Rubinstein’s vast collection of African and Oceanic art, all of which were displayed in her salons throughout the world. “The degree to which she collected in a culturally diverse way was well ahead of her time. [She] really responded to that cultural diversity in her salon and her home and the personal identification she had as a citizen of the world.” When she began her collection, the traditional sculptures of Africa and Oceania weren’t considered fine art, but rather anthropological artifacts. She sought to raise them to a higher appreciation. While being interviewed in 1964, she simply said of her taste, “I like different kinds of beautiful things and I’m not afraid to use them in unconventional ways.”

5. She was an active philanthropist.

In 1953, Rubinstein established the Helena Rubinstein Foundation. Upon its creation, she said, “My fortune comes from women and should benefit them and their children to better their quality of life.” One might recognize the foundation’s name from the closing credits of Sesame Street: It was one of the influential program’s major underwriters. Rubinstein’s foundation also established scholarships for young women to pursue their education, which continued until the foundation closed in 2011.

As she got older, Rubinstein would hold meetings in her bedroom, surrounded by a group of besuited employees as she sat in her bed. She was even photographed by Life magazine in 1964, at 91 years old, stirring a vat for a beauty cream in one of her laboratories.

Rubinstein was one of the first cosmeticians to warn against the danger of sun overexposure. She developed a product called Liquid Sunshine, a sun-protecting tanning lotion, in the 1940s. Prior to that, in 1939, she created waterproof mascara and ingeniously launched it at a water ballet performance at the 1939 New York World’s Fair Aquacade. Another one of her mascara game-changers was 1958’s Mascara Matic, the first pre-moistened mascara tube with a wand inside. Prior to this, women used creams or cakes of mascara separate from the wand, which they had to moisten with water.

It turns out that the little white tube I found in my mother’s drawer was really a product of Helena Rubinstein’s cosmetic and entrepreneurial prowess. It’s a reminder of Rubinstein’s mission: that women shouldn’t let anything stop them from embracing their individuality — least of all their mascara. Perhaps that’s why my mother never threw it out.

Elyssa Goodman is a writer and photographer based in New York. You can see more of her work at elyssamaxxgoodman.com and miss-manhattan.com