I Don’t Want Kids, Thanks for Asking. And Asking. 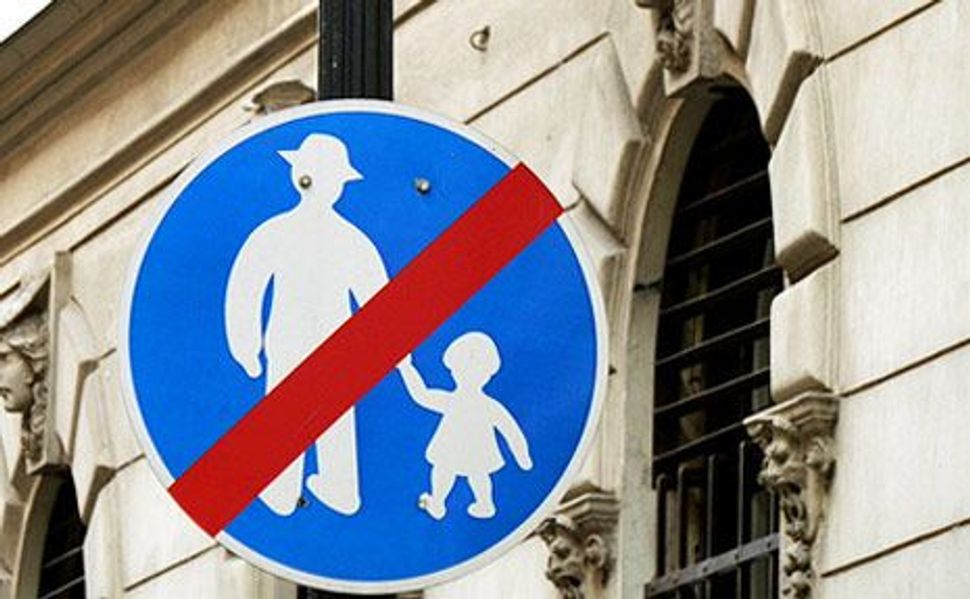 I know you said “please,” Jane Eisner. But the answer is still no, I will not have a baby because you’re nervous about Jewish birthrates.

I’m not going to have a baby, period, which I’ve said about 1 million times, on this site and others. This is the thing about people who don’t want to have kids, we end up having to say it over and over because people don’t get it, or refuse to get it, and believe it or not, we have other places to put the energy we haven’t spent on raising kids we don’t want.

People who don’t have kids have all kinds of reasons for not having them, and as a planet, we don’t deal with any of those reasons well. If you have trouble getting or staying pregnant, it’s because you waited too long, or you aren’t trying hard enough. But a lot of sympathy is still directed towards you – after all, you are a woman and at least you want kids, at least all of your woman feelings are in the right place.

If you’re a woman who doesn’t want kids, you’re just a monster, and the Jewish community is coming for your plump, wasted ovaries.

The thing is, the childfree (childfree meaning someone who does not want kids as opposed to childless which connotes someone who wants them, but does/cannot have them) have reasons for being childfree. I know that’s shocking. It’s easier to just think of us all as not caring about the Jewish community or the future at all. (Here is where, if I was writing another essay, I would mention that pushing people to procreate is guaranteeing an irreversibly huge carbon footprint, which is bad for the world.)

For us childfree folks, not becoming parents is about self care. It’s about us realizing that the best path for us to live our best lives is to not take on the anxious burden of raising a kid. We’re not willing to sacrifice our, to quote poet Mary Oliver, “one wild and precious life” to do something just because everyone thinks we should do it. It should go without saying that we know ourselves better than you do, we know what’s missing and what’s authentic for us.

Those who can’t be bothered to think outside of their belief that marriage + babies = happiness/some kind of morally correct life, won’t hear what I’m saying. And that’s disturbing.

If you think that everyone is obligated to have a baby, for the sake of the Jewish community or whatnot, you may want to think about how close you want to be politically to people who would take choice away all together.

It makes me think that we don’t actually care all that much about each other’s humanity, because if we did, we’d stop trying to convince one another that we’re doing life wrong when it doesn’t look how others want it to.

I hope I won’t have to write a piece like this again, but I’m sure I will. There is a difference between listening and hearing, and unless we, Jews or not, childfree/less or not, figure out that difference, pay attention, and do better, I’ll be seeing you soon.

I Don’t Want Kids, Thanks for Asking. And Asking.