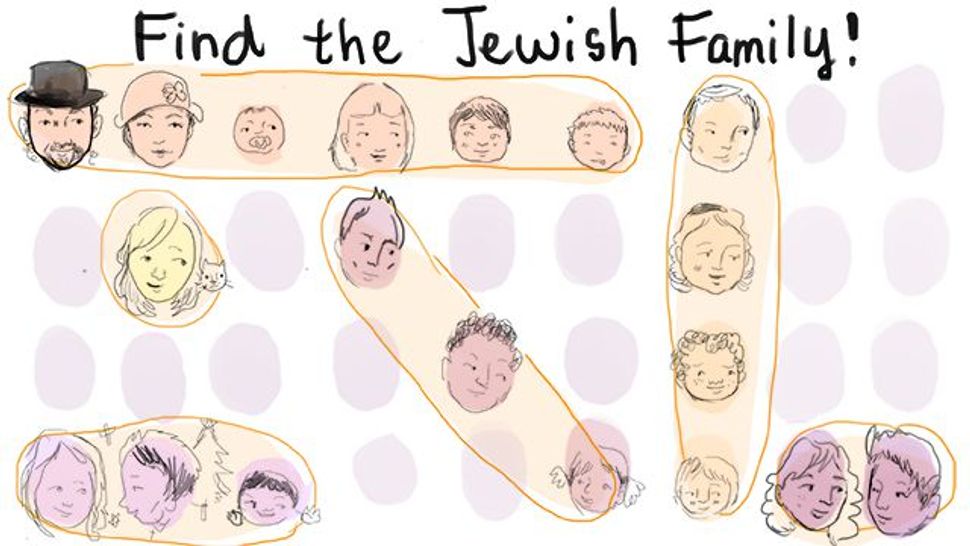 In last week’s editorial, Jane Eisner once again fretted about the state of contemporary American Judaism, most pointedly about the purported declining fertility rate amongst non-Orthodox Jews as touted by the infamous (and frankly overplayed) 2013 Pew survey. While she proposed no actual, feasible solution to this problem (or rather, this set of statistics presented as a problem), she exhibited a paranoia about the extinction of American non-Orthodox Jewry mainly due to her arbitrary rubric of what an appropriate Jew can and should be.

Read: Jane Eisner on Be Fruitful and Multiply

What Eisner fails to illustrate is the significance of how or why this is problematic.

Even more troubling is Eisner’s refutation of single women and LGBT people within her preferred American Jewish population:

“It is true that we live in a welcome time where there are new kinds of families forming, as legal rights expand for gays and lesbians, and single women find acceptance in their decision to bear children on their own. But while inspirational, these developments won’t alter the statistical landscape.”

Essentially, Eisner implies that single women, LGBT men and women, and the families that they hypothetically create are dispensable: they don’t fit into her apparently non-negotiable definition of what constitutes a Jewish family, and are thusly rendered second class to traditional nuclear Jewish families. Eisner’s negation of LGBT American Jews also speaks to the larger problem of their erasure within the American Jewish landscape: the same Pew study she cites failed to even poll those who participated in the survey on their sexual orientation and gender expression (the only questions the Pew study entertained were opinions on marriage equality and whether those polled considered gays and lesbians to be discriminated against), an accompanying invisibility which is in itself devastatingly problematic. The fact that LGBT couples can explore and employ other methods of procreation, such as adoption, surrogacy, and in certain cases biological birth is never mentioned; only the first two are vaguely connoted.

In addition to this, Eisner’s displacement of single women not only ignores the multifaceted definition of single womanhood – that this particular status is sometimes the byproduct of divorce and can also be accompanied by pre-existing offspring – but also implies that single women, regardless of their respective and individual choices to pursue or not pursue motherhood, are meaningless within the Jewish cultural sphere, insinuating an objectifying and heteronormative commoditization of the body. In short: that without the ability or the desire to bear children, women are worthless. For a self-professed feminist, Eisner seems entirely opposed to the agency of women.

As a queer Jewish woman myself who has written extensively about the shifting criterion of Jewish identity, especially in regards to interfaith relationships, I can’t help but see Eisner’s piece as an erasure of single women and LGBT individuals from the Jewish cultural sphere. This act of judgement is not one for Eisner, nor anyone, to commit; to do so would be an inherent violation of our inalienable religious and ethnic heritage.

Towards the end of her piece, Eisner affirms that “one of the beauties of Jewish tradition is that it is counter-cultural [sic].” “Countercultural” is a mislabel, rather than actively act as contrarian to contemporary culture, Judaism is adaptive to it. It is a religion and ethnicity of constant reinterpretation and evolution, a solution we as a people have utilized for our very survival over the course of millennia – it’s what makes us tick. Resisting shifts in our paradigms is a futile exercise; rather than this, we should embrace change, and create new definitions of what the cultural makeup of the American non-Orthodox Jewish family, or even more so, of the American Jew.