The Women of ‘Letters to Afar’ 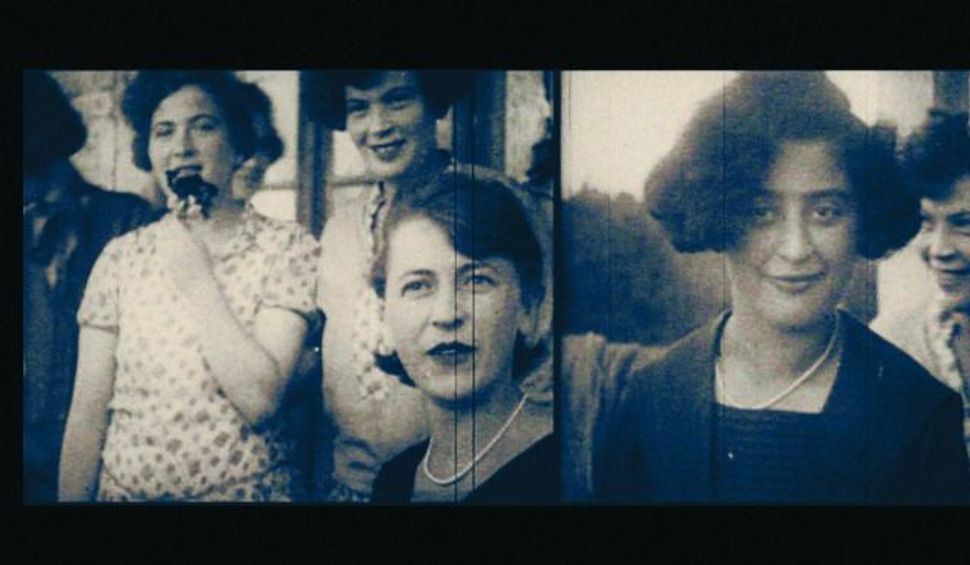 Oszmiana, Poland. Still from Polish home movie c. 1920s-30s. From the Archives of the YIVO Institute for Jewish Research

Most of the figures who appear in Péter Forgács’ collages of films, which American Jews took in the 1920s and 1930s of family and friends in Poland, are men. They don and remove hats; they horse around during family photo shoots; they drive horse-drawn buggies down streets; they juggle; they smoke; they look thoughtfully at books.

Women appear less prominently in the films, which are on view in “Letters to Afar” (through March 22, 2015) at the Museum of the City of New York. In some instances, they literally circumventing male counterparts who (seemingly unintentionally) obstruct the camera’s view of them. The women blow kisses here and wave there, and, as a catalog essay notes, “cast seductive glances … an elderly woman turns away her wig-covered head.”

Of the former group, one film’s male narrator adds in a description of Lodz: “It’s exciting to swim through this teeming crowd. These women in furs. Their heads drawn in between their shoulders. Their hats in their faces. The slender girls with a touch of perversity. Big dangling earrings. Heavy overshoes. Black gazes. They are starting to dress up their faces.”

Asked about the depictions of women — from seductive glances to wigs — Forgács says the catalog text is a separate entity from his videos. “I am trying to provide visitors with a little bit of insight into who[m] the people in the home movies were through physical behavior, which can definitely include a particular glance, a laugh, or a turn,” he says.

Jeffrey Shandler, the chair of Jewish studies at Rutgers University whose book is on sale in the museum shop, shrugs off differences between how men and women are depicted in the films.

“More striking to me is an immigrant gaze on the Jewish ‘old world,’” he says. “I think the differences between the ways that Americans vs. Europeans and younger people vs. older people are photographed, and how they behave before the camera, are more revealing.”

Whatever degree one chooses to weigh the gendered depictions (viewed through male gazes), the show, in some ways, recalls a 2005 Hebrew Union College exhibit on Waldsee. Where the latter explored deceptive postcards that Auschwitz inmates had to send to relatives overseas telling of their comfortable accommodations, the current MCNY show also is part of a broader and darker landscape.

Although some of those family members and friends appear happy and carefree, viewers know what is in store for those Polish Jews. (To be precise, some of the videotaped subjects appear apprehensive about being filmed.) In an interview mentioned in the exhibit catalog, Forgács talks about the “uncomfortable feeling” that viewers experience, as with an Alfred Hitchcock film.

“We know ahead of time that the innocent victim will fall into the hands of the killer,” he is quoted as saying. “We want to warn her or him: watch out!”

Anticipating the killers casts the project as a vanitas (or memento mori ), the style of many Dutch and Flemish still-life paintings, where it’s impossible to forget that the abundant food and flower display will soon decay. But despite that grim inevitability, the display is tantalizingly beautiful.

In the video footage at the museum, a time capsule emerges, which offers a unique aesthetic opportunity—to exist however temporarily with the films’ protagonists. We witness them participating in everyday activities: A man prays at the grave of an ancestor; a woman applies lipstick; children play.

Today, sadly, none of these faces can be seen while walking those same Polish streets through former shtetls. Some of the last memories from flourishing Jewish life in Poland during the interwar period may well be preserved in this exhibition’s footage.

But entirely losing ourselves in 1920s Poland wasn’t possible the day we visited the exhibit, as one video was projected backward (the text read as if in a mirror), and another film was inadvertently cropped, with the band of footage that was supposed to appear at the top instead running beneath the rest of the video.

“We have never had any issues with the films playing backwards,” filmmaker Forgács informs us, noting the films playing at different speeds may have thrown us off. (Still, the text was backward.) “Regarding the top of the film being cropped, that was actually a little technical problem that we have since corrected.”

Technical issues aside, the exhibit comes to New York at an important time. Some 4,000 miles east of Manhattan, the Museum of the History of Polish Jews opened its doors recently to much fanfare. (It was called the “Louvre of Jewish museums” in these pages.) For those who can’t make the trek to Warsaw, the exhibit, a collaboration between MCNY and the YIVO Institute for Jewish Research, brings films about Poland within reach.

The exhibit, with music by the Klezmatics, is “rooted in history of Jewish immigration to New York City,” says Susan Jones, the museum’s director. Nearly 1.5 million Jews lived in New York in 1914, and by 1930, Jews represented a quarter of the city’s population – and, she says, an “astounding” 49 percent of the Bronx.

“New York’s character has been shaped by these immigrants—politically, culturally, and economically,” Jones says. “It is important for younger and older generations to see how the people in these home movies are part of a culture that is vital to New York’s identity and history.”

Chavi Moskowitz is a development assistant at the Tel Aviv Foundation and a Jerusalem Post contributor. Menachem Wecker is a Washington, D.C.-based freelance reporter.

The Women of ‘Letters to Afar’