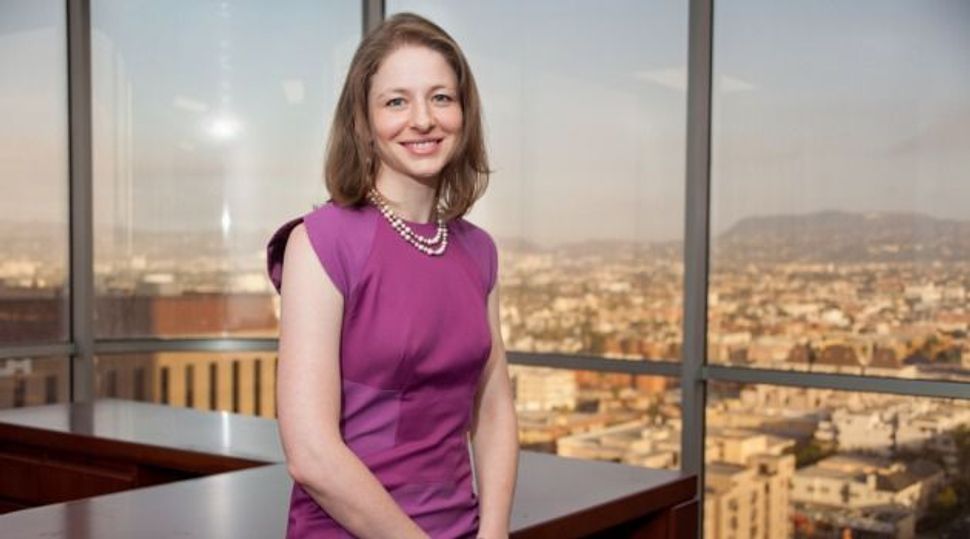 If you haven’t yet heard of the public interest law firm Bet Tzedek — the time has come.

On December 1, Los Angeles attorney Jessie Kornberg was appointed as the organization’s next president and CEO. The San Francisco Bay Area native was chosen after a four-month search and will be the first woman to hold that position. Bet Tzedek (Hebrew for “home of justice”) was founded 40 years ago to give legal assistance to Holocaust survivors and other seniors. Today, Bet Tzedek has about 60 employees and almost 2,000 pro bono volunteers providing legal support to the needy of all backgrounds in Los Angeles. In 2013 alone, the organization contributed more 53,000 hours to about 15,000 people.

On a national and global level, Bet Tzedek’s Holocaust Survivors Justice Network has trained attorneys around the world in how to aid survivors, helping thousands obtain reparations.

The Forward’s Julie Sugar spoke with Kornberg, 32, about Bet Tzedek’s work and Kornberg’s own pursuit of justice throughout her career.

Julie Sugar: Was there a moment during the interview process when you thought, “This is the organization for me”?

Jessica Kornberg: I very much felt that way going into it. I never thought I would get it! I’ve always been a huge supporter of Bet Tzedek and have been connected to the organization for many years, as a peer and a donor and as an admiring observer.

How would you describe Bet Tzedek to people unfamiliar with its work?

It’s the oldest, best, largest legal aid provider to the poor in Los Angeles — and probably the country. They are at the forefront of the issues impacting the most needy among us: housing distress, employment discrimination, wage theft, disability rights, elder abuse, government benefits, forced labor reparations. These are the civil rights issues and legal areas that concern those most vulnerable, and Bet Tzedek really leads the charge in defending folks in each of those areas. So in addition to being a historic, legendary organization, it’s also this very essential protection right now.

Besides the name being Bet Tzedek, is there an explicit connection today to the Jewish values on which it was founded?

Absolutely — it remains centrally connected to the founding principles and values emanating from the founders’ Jewish heritage and connection to their Jewish faith and their Jewish community. The direct work with Holocaust survivors is one part of that legacy, but the mission of Bet Tzedek is to provide justice for all, because that is a Jewish value in and of itself. What I have found is that for each board member, founder, past president and staff member, the understanding of that connection is different — and it reflects that individual’s own connection to the Jewish community. So I answer the question, in part, based on my connection to the Jewish community, and how I see my Jewish heritage as leading to my commitment to social justice.

You were one of the founders of Ms. JD. an organization which addressed issues concerning women in the legal profession. Why did you found it? What was behind that?

I was a late adopter of a lot of women’s issues and feminist legal theory. I went to law school really focused on anti-poverty more generally, and it was only over time that the intersections between poverty work and women’s issues became impossible to ignore: The poorest among us are women, the most vulnerable among us are women, and the easiest way to make the biggest different in terms of changing the conversation about economic justice is often to help women. In terms of founding Ms. JD, it was about meeting a group of incredible women who had this very good idea for creating a safe place on the Internet for women to talk about their experiences in the workplace. It didn’t exist, it was totally necessary, and its success and the way it’s blossomed and grown speaks to that.

What is one of your earliest memories of either fighting injustice or pursuing justice?

This is another connection to Jewish identity in the context of fighting for justice. My father used to live in Israel (and part of my family still lives in Israel), and I remember every time things started to get worse there in terms of security, my father talked about going back. At a very young age, I remember being very confused about that, and thinking: Isn’t this the worst time to go visit? I was in grade school, and that’s when the bus bombings were really frequent. It was scary because my cousins were there, and they rode the buses. My dad said, “This is when I feel like we should go back.” He explained to me that those moments — when the values you care about are under attack —are the times when it’s most important to show up.

I think about that because I think about what Bet Tzedek does for its clients, how intimidating a court system can be to an outsider, and Bet Tzedek is the army at their back. Bet Tzedek, in practical and legal terms, is providing assistance, but in emotional and moral ways is providing the kind of support and confidence and trust for people that they would not otherwise have. It’s about more than just the single practical result; it’s about creating a feeling of solidarity and power for folks who find themselves on the brink of real disaster.

I think the gender discrimination issues that women are facing are much more extreme in many cases than for women in the legal profession. That said, I think the effects of gender bias are pervasive and persistent in the legal profession, and they absolutely need to be addressed. One challenge that the legal profession has — compared to, for example, other sectors of corporate America — is that most lawyers are organized in partnerships as opposed to a hierarchy, and it is harder sometimes to effect change in those environments because you have a much broader decision-making group.

Is it important to you that the fact you’re a woman is a focal point of the conversation?

Yeah, absolutely. It’s an exciting moment for the organization to have leadership that reflects its core values. Bet Tzedek has long been committed to equality among its staff and its employees and for its clients, and this is the natural progression of things for an organization that’s really walking the walk.