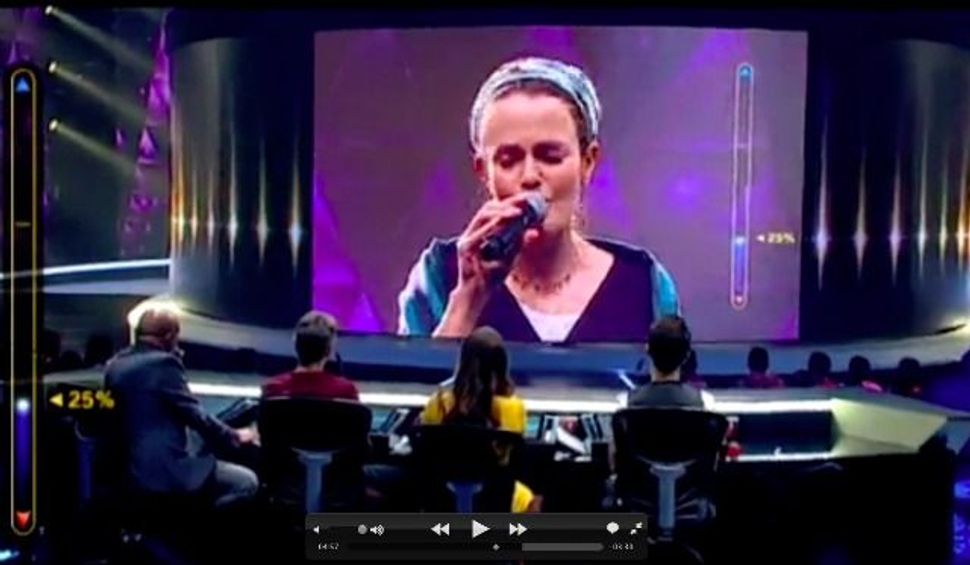 Shayna Rehberg is an unlikely superstar. A 30-year-old religious mother of four originally from Texas and now living in Safed, Shayna walked onto the stage of Israel’s popular singing competition show, Kochav Haba [Next Star], donning her headscarf and long skirt, and made it to the next round following a rendition of Alanis Morisette’s “Ironic”. She impressed the judges perhaps less with her singing — which at times was lilting and commanding and at other times withdrawn and fragile — and more with her life story. She told the judges, and thousands of viewers, that she had stopped singing for ten years because of religion.

“This is like coming out of the closet,” Judge Harel Skaat sympathetically told her, adding that it was no different from his own experience of coming out as gay. “You’re coming out of a cage, even if it’s a self-imposed one.”

This exchange with Harel Skaat was not only beautiful for its empathy, but also incredibly revealing and insightful about the dynamics of being an Orthodox Jewish woman.

The powerful idea that emerged from this exchange is that the custom of women not singing hurts women. It’s a restriction, like Ariel’s curse in The Little Mermaid, of silencing not only voice but also passion and even personality. Singing is a vital expression of life. Music has profound spiritual and emotional meanings. A life without singing can be a deeply painful one, especially for a person who has a special voice. Orthodox Judaism would never consider imposing such a rule on men. It would never enter anyone’s mind to say that a man who loves singing should stop singing. And yet, this is what Orthodoxy does to women all the time.

In her interview, Shayna said, “I decided that kol isha is not erva” — that is, that the halakhic description of women’s voices as causing sin is wrong. This was such an inspiring model of empowerment. It is a close-up view of what it means for women to talk back to their culture. I don’t know if the audience realized how hard this is. To be hearing for years — for your whole life, perhaps — about what women’s bodies and voices are or aren’t, and then to wake up and decide that your culture is wrong, well, that’s an incredible moment of awakening.

There are a few more interesting points to this performance worth harping on. One is about her marriage. When one of the judges asked her what she had to overcome in order to be able to sing, her response was a shocking, “I filed for divorce.” The implication here, even though not stated explicitly, is that her husband was not letting her sing. This was not surprising for me to learn, even if the public admission had some of the audience booing. But this was also a huge admission of truth. I belong to several different online forums for religious women, and there are constant posts in the style of, “I would like to do X but my husband says that it’s not okay.” I find these kinds of posts chilling, and often suspect abuse. Let’s be clear about this: a man who controls his wife’s behavior, even if he is using religion as a justification, is abusing her. This may be abuse in the name of religion, and it is still abuse. Shayna gave a face to this kind of abuse, and I have no doubt that there are many religious women at home watching and listening carefully.

I also think that there is a broader implication for religious women about other practices that are emotionally confining — what Harel Skaat called a form of prison. For some women, forced clothing choices may fit into this category. Little girls wearing only skirts effectively are unable to engage in fun childhood activities like climbing a tree or going swimming with the family. So often I see religious families on the beach where the men and boys are frolicking and the women and girls are sitting still. As someone who used to do this, I can attest that this socialization into a complete stance of passivity in the face of life’s beauty and the earth’s invitation to play is painful and even tragic.

For other women, head covering is the prison. (I used to do this too). I’ve been speaking with religious women who stopped covering their hair – as I did many years ago – and many women describe the process as liberating. Our hair can be such a huge part of our identity. When you start to put that scarf or hat on, your whole face looks different. It’s possible that your personality changes too. You become the covered, married woman, owned and unavailable. Maybe some women like that feeling of not being able to be hit on by men. But it can also be a stance of self-restriction and containment.

There is so much for women to learn from Shayna. When the judges said, “She has so much light emerging from her,” I totally saw that. The process of talking back to your culture, taking ownership, and finding your own voice — in this case literally — is a beautifully spiritual and empowering process. I hope Shayna is able to find her power again, as Skaat said, and really belt out her music on this show. I wish her well and hope that she continues to shine her powerful light onto women and all of humanity.