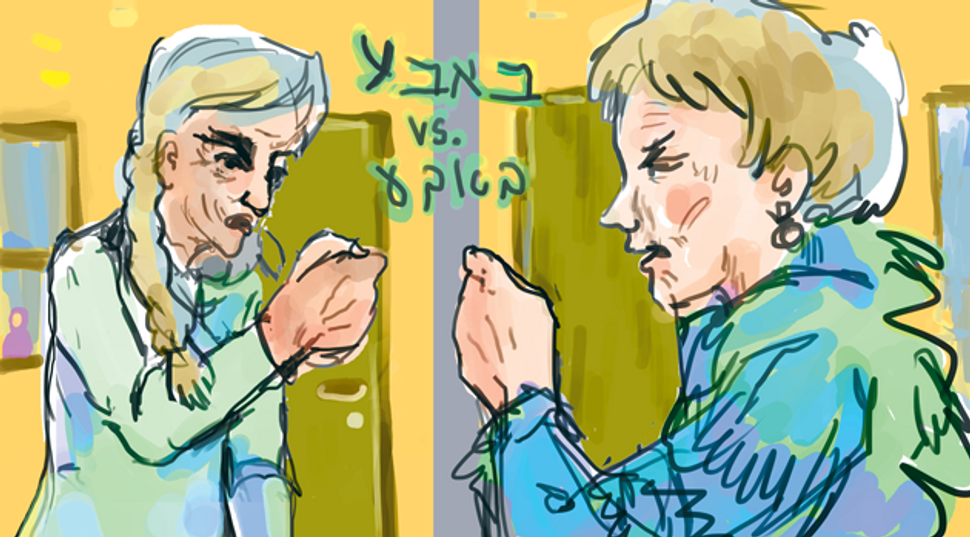 My grandmothers, Bubbie R. and Bubbie G., lived next door to each other throughout my childhood in Wilmington, Delaware. They had also been next-door neighbors throughout my parents’ childhoods in that same city. Yet even then they were striking in their differences, as dissimilar to each other as night and day, oil and water, cheese blintzes and Pillsbury dinner rolls. Bubbie R., a woman who cooked by feel and taste, had spent her childhood on the ever-changing border of Poland and Russia, shearing sheep, evading pogroms, and riding horses. She had a thick-as-chicken-schmaltz Yiddish accent and called everyone “dahling.”

Bubbie G., who clipped recipes from Ladies Home Journal and local newspapers, had had the good fortune of “coming over” from Russia as a child. She grew up in Winnipeg, Manitoba, where she learned to read and write English, Yiddish, and Hebrew. She became a career Hebrew school teacher, and peppered her conversations with phrases like “pedagogically speaking.”

Yet, like any child who grows up with grandparents who share a backyard flagstone patio and a need to make sure that I always had enough to eat, I didn’t realize that these two former Pioneer Women presidents, who wore similar but not matching housedresses, had their differences. I just knew I loved running back and forth between their semi-detached brick houses and bathing in the constancy of their hugs, admonitions, and rugelach.

It wasn’t until one unhappy day on the way toward puberty, that I became aware of their mixed-to-negative feelings toward each other. I was having lunch and Torah lessons at Bubbie G.’s house, working my way through salmon cakes and several slices of Deuteronomy, when she suddenly confided to me that Bubbie R. spoke the “Yiddish of the street,” while she herself spoke the more refined “Yiddish of the book.”

After that I started noticing other fissures in their relationship, how Bubbie R. referred to Bubbie G.’s “yecky” friends as snobbish. Or later, when they were supposed to go to Israel together, and then didn’t. And stopped speaking to each other for a little while.

At first I didn’t get it. How could my two bubbies, who seemed to have the same zeal for Yiddishkeit, Labor Zionism, and grandmothering, be so critical of each other? It seemed to me that my two grandfathers, my zaydes, got along without any problems — why couldn’t their wives?

I got no answers then, not that I asked, but it may have marked the beginning of the end of one of my major childhood illusions: that not only did the bubbies I loved so greatly not love each other, but they were also as flawed as any of the foremothers I had learned about in the Book of Genesis.

A few years later, after both my zaydes had died, my parents moved out to the suburbs and I could no longer walk to my bubbies’ houses. Not long afterwards, Bubbie G. sold her house after marrying a lovely yecky man with a thick German accent and moved to Ocean Parkway in Brooklyn.

Bubbie R. also married again — to an Eastern European man who spoke and wrote a beautiful Yiddish. She stayed put, though, and he moved into her house on West 38th Street. After they remarried, I visited them, separately, but not as often as they wished, in Wilmington and New York. But I made them both equally happy when, several years later, I brought my fiancé, Charlie, to meet each one on her own home turf. Bubbie R. was happy that Charlie was “Shomer Shabbos.” Bubbie G. was impressed that he had a Ph.D. At my wedding, they spoke civilly to each other, each sporting her respective second husband, and their détente seemed to last until their deaths.

I mourned Bubbie R. and, a decade later, Bubbie G., with equivalent fervor — and finally understood how tough it must have been for these two strong-willed “machatenestes” to compete for their children’s and grandchildren’s affections and attentions in the shtetl-like Wilmington streets of west 37th to west 40th.

But I still didn’t get why, given their mixed feelings for each other, they had chosen to live next to each other for the second time. Asking my parents wasn’t much help, although I did find out that Bubbie G. had moved first.

“My mother told Dad’s mother that there was a house for sale next to her,” my mother said and then moved on to another topic.

I knew then that I too had to move on, that there was no need to delve further into heart of my bubbies’ complicated relationship. Maybe the reason was a simple as what Dickens had written in A Tale of Two Cities, that “every human creature is constituted to be that profound secret and mystery to every other” — or maybe because, as Bubbie R. once said, “A leopard doesn’t change its spots just because it’s going to Israel.”

In the end, though, I knew that what was most important was how lucky I was to have had a steady stream of double-bubbie-love anchoring me throughout my childhood and later, after I became a mother — to have been able to hear Bubby R.’s throaty voice whenever I sang “Rozhinkes Mit Mandlen” to my daughter, or Bubby G.’s distinctive enunciations when I read A.A. Milne’s Christopher Robin poems to my sons.

And now that I too am a grandmother to a baby girl, as well as one of two bubbies, I realize that whatever my grandmothers’ relationship was is really none of my business. Whatever their difficulties with each other, what I received as their granddaughter was not judgment but open arms and exclamations of delight just for being who I was — “Malkele,” as Bubbie R. called me, or “Marl,” as Bubbie G. sometimes addressed me.

And I’m sure that they must have wanted for me what I want for my granddaughter, Allie, namely, that all should be right in her world and in the whole world. Failing that, what I can and am trying to give her is what my bubbies conveyed to me: Warmth and acceptance, as well as many chicken-soup-with-love type lullabies in Hebrew and Yiddish.

“Bubbie” is also what Allie calls me — and whenever she does, I feel sure that my two bubbies, whether arguing or sitting together on some Heavenly backyard patio, are smiling.