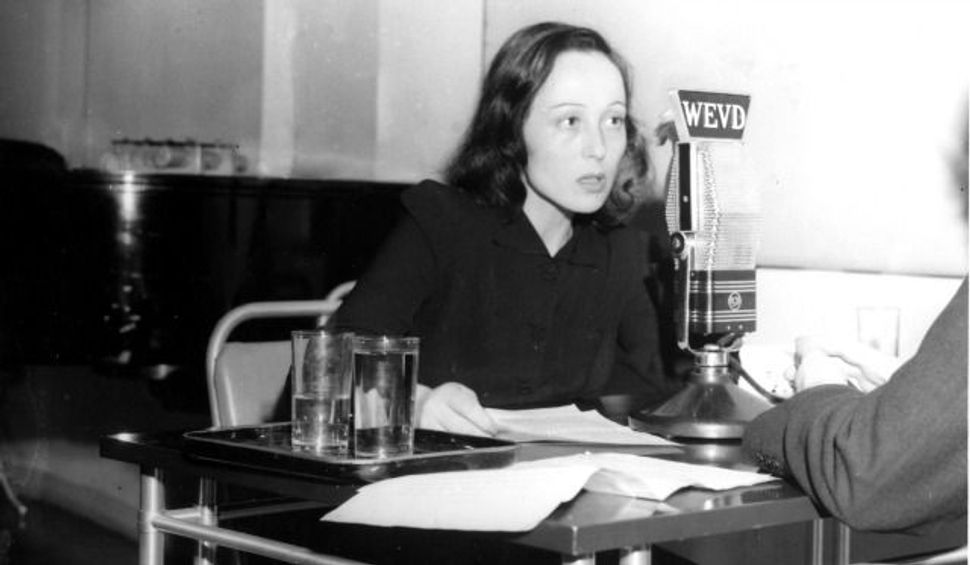 Perusing the Forverts’ Art Section of December 8, 1940, scanning past images of important personalities that appeared on the Forverts’ radio station WEVD in a ‘Salute to America’ pageant was the intense radiant face of German Jewish immigrant actor Luise Rainer. Seated beside two glasses of water carefully balanced on a tray, Rainer faced the microphone, eyes raised towards the man across from her. His hand remains authoritatively on the desk they share for the broadcast, and one assumes he was the director. Her hand gracing the pages of a script and her full lips parted midway in speech, easily draw our attention but it’s her deeply stirring intimate gaze across the photo emulsion that captivates, refusing to release us.

“Salute to America” was described in the accompanying English caption as a “patriotic broadcast saluting the American way of life.” The Yiddish text alongside it, excitedly, yet philosophically, described the show as a ‘salute to American democratic principles and the country’s general democratic character.’

New York’s Lieutenant Governor at the time, Charles Poletti, attended the broadcast dressed in a tuxedo and addressed listeners, as did Hunter College president Dr. George Shuster and prominent Dutch historian and author Henrik Willem Van Loon. Novelist Fannie Hurst, also of German Jewish heritage and Chair of the Workmen’s Compensation Committee at the time, arrived in a fabulous black hat somewhat resembling a nun’s wimple. Not to be outdone, Dr. Frank Kingdon, Chair of New York’s Committee to Defend America by Aiding the Allies, which by 1940 strongly advocated for America to aid Britain, shared a microphone and desk with beloved Jewish theatre actor Gertrude Lawrence.

Looking regal and quite serious in a pair of dark framed round spectacles, noted composer Irving Berlin, sang his “God Bless America” on air in front of a live studio audience.

Passing through the pages of the Forverts that December one read the headline telling of terrible pogroms against the Romanian Jews, while British airplanes attacked German and Italian ports. Ab Cahan’s editorial demanded America come to England’s aid and decried pacifism as undemocratic at this critical time. Next to an for Mays, the famed Brooklyn department store selling women’s dresses and sport coats for $3.90, was one for a European parcel service on West 42nd Street in the city where one could ship food packages to “German-Poland” as well as Germany.

Into this maelstrom strode Luise Rainer, acclaimed two time Academy award winner in consecutive years—in only the second and third year of her American life— undiminished by Hollywood and America’s seeming resistance to join the anti-fascist struggle. Having survived her own early escape from Hitler’s Europe, Rainer was active in a variety of progressive struggles including the Spanish Civil War against fascism. In her personal life, she had frequent dust-ups among her avant-garde cadre including a volatile marriage to radical star-playwright Clifford Odets and a falling out with theatre great Berthold Brecht. But she remained a source of inspiration and admiration for other artists including a reported girl-crush by erotica writer Anais Nin.

The Yiddish proverb Di gantse velt iz eyn shtot, [the whole world is one town] seems apt for Rainer. After a long, sometimes fraught and determinedly rich diverse artistic path, that evinced much compassion, including a stop off on the pages of the Forverts, actor Luise Rainer died December 30th, at the age of 104.