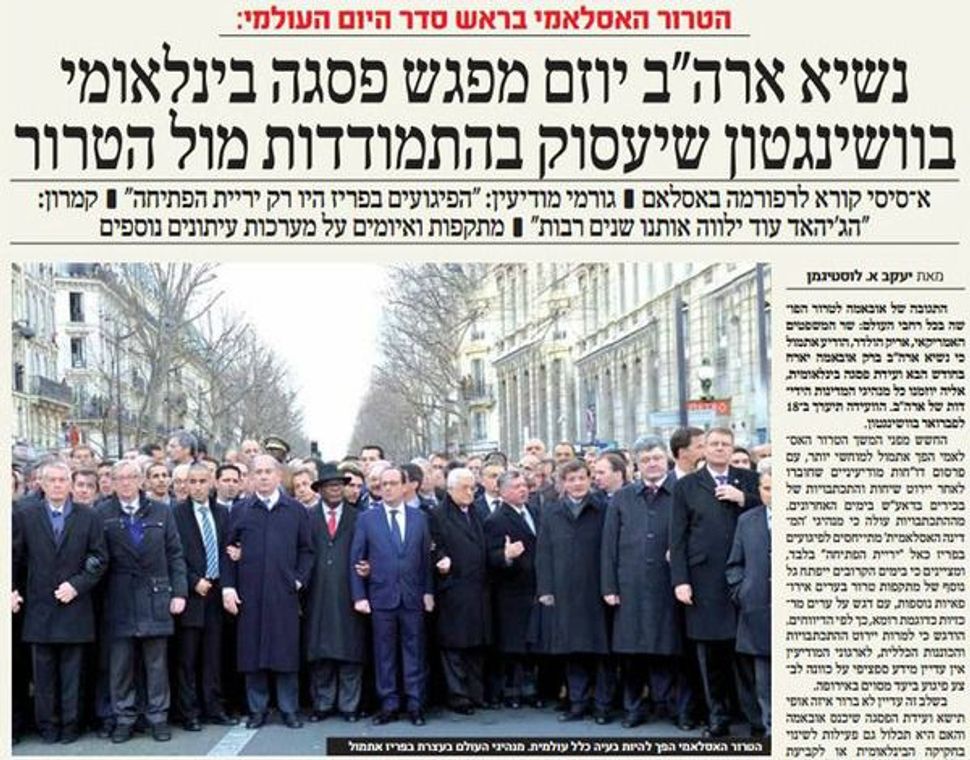 My friends and family find it alternatively bizarre and comical that I so eagerly consume an array of ultra-Orthodox publications whenever I visit my hometown of Flatbush, Brooklyn. But I think it’s edifying to learn what other people — especially Jews — who who hold opinions and convictions different than my own are saying. In almost all these publications, I notice the absence of images of women. It’s nothing new: not publishing images of women, even young girls, is a longtime standard policy of Haredi publications, which zealously adheres to the directive of modesty, so much so that they surpass what Jewish law calls for or probably originally intended. Welcome to ultra-Orthodoxy, ladies and gentleman.

So I was surprised when Haaretz published a story on how Angela Merkel, the chancellor of Germany, was erased from a photograph of the unity march in Paris this past Sunday by the ultra-Orthodox newspaper HaMevaser. Well, maybe not surprised to learn that Haaretz ran a story on something gone awry in the Orthodox world, but I was certainly taken aback to read this “hot take” from the writer: “It is rather embarrassing when, at a time that the Western world is rallying against manifestations of religious extremism, our extremists manage to take the stage.”

Hold the phone! What’s humiliating in this entire situation is that we have to bear witness to the admittedly “extreme” Haredi practice of photoshopping women out of their magazines’ photographs…because we should all be taking a stand against the kind of religious extremists that, you know, murders innocent people with divergent religious or political beliefs?

Following Haaretz’s piece, the story went viral, and a lot of mainstream publications and blogs picked it up, including the cultural website Jezebel, for example. Echoing Haaretz’s sentiment, Anna Merlan writes, “One could argue that the worst possible way to cover a march against religious extremism is to overlay your own peculiar brand of religious extremism on top of it.” Both Haaretz and Jezebel strongly imply there exists a link between these two forms of religious extremism, although both neglect to follow up by conceding that only one form of extremism results in the murder of innocent people against a backdrop of the larger trend of rising fundamental religious terrorism. Naively, I looked for the comments decrying their absurd comparisons, and found none.

And then somehow, though this Haredi practice has been around for decades and adds nothing to the conversation that should be happening on the violent religious extremism that actually threatens people’s lives, the Grey Lady, too, somehow deemed it vitally important to cover this apparent crisis, and for what? So readers can shake their heads at those crazy Haredim? Off the top of my head, I can think of tens of other stories in addition to the ones the New York Times already covered that are worthy of exploration at this critical juncture in our modern world, but a puff piece about a Haredi cultural phenomenon that’s been around for years certainly isn’t one of them.

That it’s become standard Haredi policy to remove women from photos that appear in their publications is a story, to be sure — there are numerous interpretations, opinions and commentaries to be offered on this form of practicing the basic tenet of modesty. I’d be interested in reading all of them. But right now? In the wake of two deliberate acts of religious violence in France, during a year that has been particularly venomous for French Jews and Jews the world over, wouldn’t it be better to devote valuable real estate that exists in these publications, within such a fast and furious news cycle where reader interest wanes hourly, for any other number of important stories that add context and insight into the much more critical story of fundamentalism as manifesting itself in terrorist acts against people of different faiths and political stripes? Disaffected Islam youth, failed European immigration policies, a resurgence of worldwide anti-Semitism, individual experiences of French Jews forced to leave a place they’ve called home for generation: the list teems with stories that haven’t been covered or haven’t been covered in-depth. It’s astounding to me that just a week after innocent people were murdered in cold blood, the conversation this week is being dominated by a Photoshop job. It’s astounding to me that people are discussing these two forms of religious extremism in the same breath, like they in any way share tangible comparison.

The Haredi practice of excising women out of their communal photographs is difficult to understand; most of the time, I find it deplorable and vexing, to say the least. But then, I think of the many women I know within those communities who find beauty and meaning in their way of life, however archaic it appears to me. It doesn’t seem to raise their ire not to see themselves represented in weekly shopping circulars or community magazines. When my friend told me of the way her husband colored over an image of a woman on one of their cereal boxes, I was horrified, but she just laughed, admitting she knew her family and friends found it ludicrous but she respected her spouse’s religious convictions, even when she didn’t fully understand the ways he went about them. Who am I to dictate the way these women should feel about a way of life that I would personally find smothering?

But I stop just short of that, knowing that there are likely many women who do live inside those communities and resent not being seen, but find themselves unable to leave for a more relaxed lifestyle for so many different reasons. Unlike my friend, who grew in religiosity and chose that stricter lifestyle for herself, many of these women were born into it, and, faced with few choices and even few tangible options, deeply wish they had the space to be more widely heard and seen in the public sphere. Like I said, it’s an important story.