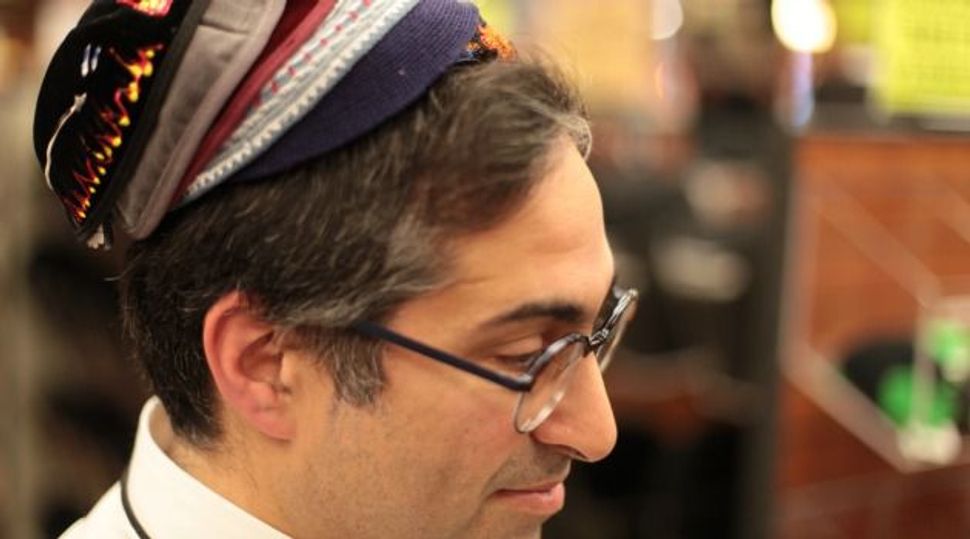 Under Cover from Jewish Daily Forward on Vimeo.

If you see my husband and son walking on the street, you will instantly know that they’re Orthodox Jews — because they are wearing small, round cloth caps, more widely known as yarmulkes. Much like the sheitel, or wig, that many Orthodox women wear, you can tell a lot about a Jewish male by the type of yarmulke (also referred to as a kippah, or in Hasidic Yiddish, kapl) that he wears. Like the jacket and shirt on his back, the absence or presence of peyes, or sidelocks, the headgear announces to the world his family’s tradition and his Jewish denomination.

Pious Jewish men have been covering their heads for hundreds of years, yet there isn’t necessarily a clear and definitive Jewish law, or Halacha, requiring it. Rather, it was one of many of the Jewish customs and traditions, known as minhagim, that evolved over the centuries to become de-facto Halacha, eventually becoming the most universal identifier of observant Jewish boys and men.

Moses and the Israelites proudly left Egypt bareheaded, according to one Exodus explanation. Later, according to the Babylonian Talmud, head covering was a pious practice exclusively for learned married men, possibly because it connoted humility. After the talmudic period, one can find a dizzying variety of evidence as to what the local practices were. By the 18th and 19th century, attitudes toward head covering hardened: As Ashkenazi Jews ubiquitously covered their heads in yarmulkes, not covering became something modern Jews would do.

By the early 20th century, wearing a yarmulke became associated with Orthodox Judaism, although many men wore hats in place of yarmulkes in public. The halachic debate of whether one is required to wear a yarmulke thus shifted to the size one should wear: The bigger the yarmulke, according to popular convention, the more pious the wearer. All yarmulkes come in many sizes to fit the heads of children and adults.

Hasidic men, who belong to the ultra-Orthodox movement founded by the mystic Baal Shem Tov in 18th-century Ukraine, customarily wear black velvet yarmulkes that cover three-quarters of their heads. Subtle yet significant distinctions in the cut and rim are typically dictated by communal or familial traditions. In many Hasidic families, boys also wear a shlof-kapl — or sleeping yarmulke — a round-knit skullcap, usually white, that fits securely on one’s head.

Most Orthodox men wear yarmulkes all day, starting from the age of 3 when a boy customarily gets his first haircut. Among the Modern Orthodox, small yarmulkes the size of a baseball, secured with hair clips, are more common. Conservative Jews also wear yarmulkes, generally in synagogue, and also often when sitting down to a meal and reciting the blessings.

The yarmulke market has grown exponentially in the 21st century. In recent years, more and more women, mostly from Conservative and some Reform communities, have been wearing yarmulkes as well, typically during prayer services in synagogue.

In an effort to demystify the yarmulke, what follows is a basic guideline to the current yarmulke trends, with a focus on Orthodox Jewish men in America. But a caveat, many wearers buck convention and choose what they personally prefer. 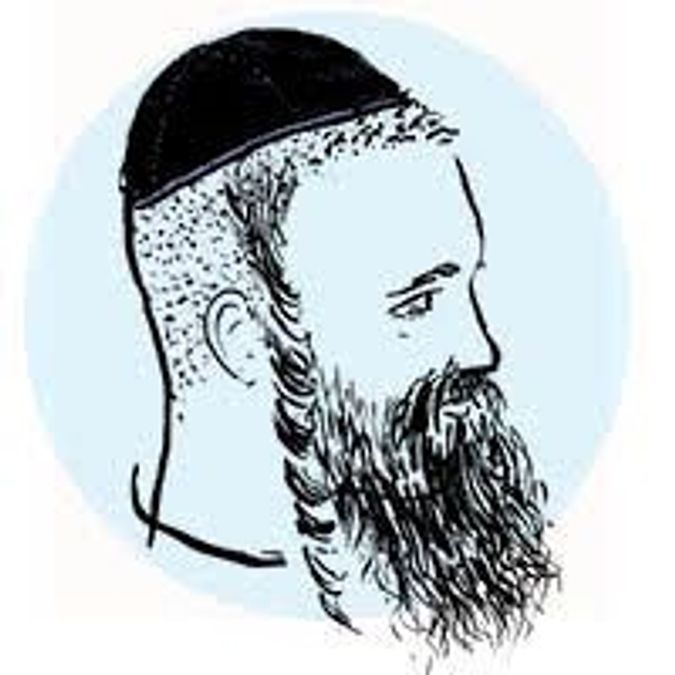 A black velvet six-slice yarmulke is made of black velvet fabric with a polyester lining and has six pieces, or “slices,” sewn together. These are manufactured with or without a satin rim, the rim denoting greater piety. The overwhelming majority of Hasidic boys and men, other than those who belong to the Chabad-Lubavitch and Ger sects, wear the black velvet six-slice kapl. The wearers generally have short-cropped hair and sidelocks. 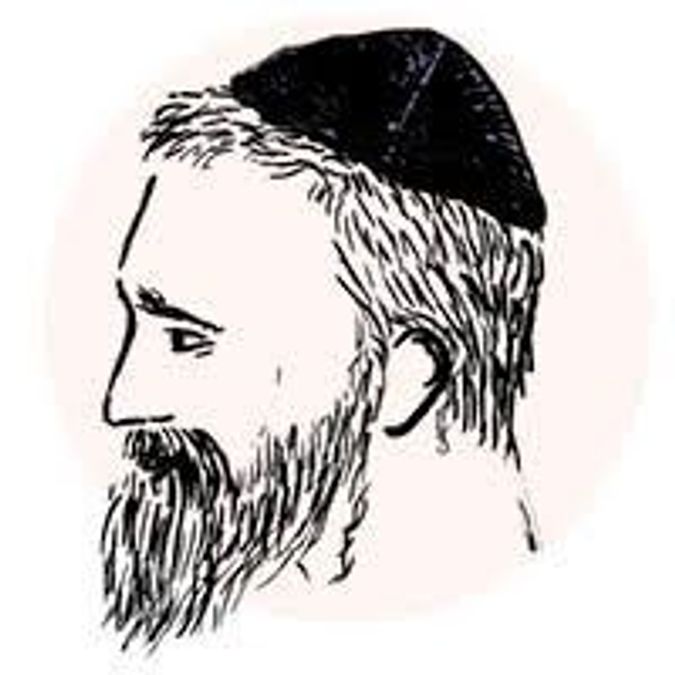 Similar to the black velvet six-slice, a black velvet four-slice yarmulke is made of black velvet fabric with a polyester lining and has four “slices” sewn together. These are manufactured with or without a satin rim. This yarmulke is typically worn by men of less stringent Hasidic sects. Many Litvish (non-Hasidic ultra-Orthodox men) in places like Lakewood and Brooklyn, wear this yarmulke, too, over short hair and trimmed, straight sidelocks that are often tucked behind the ear. 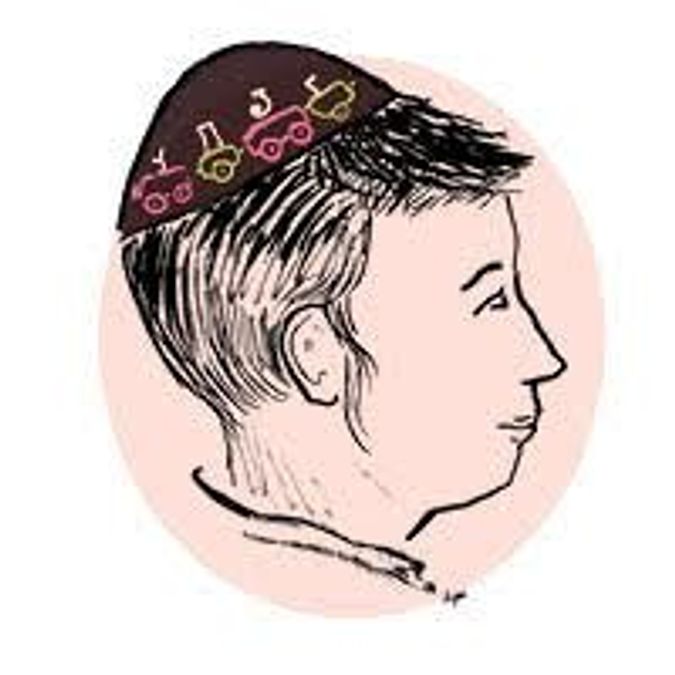 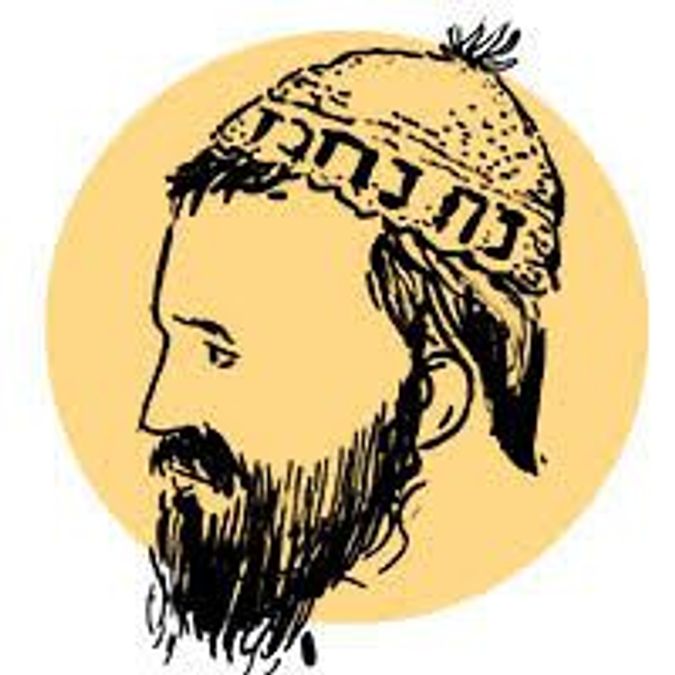 A Breslov yarmulke, also called the Na Nach Kippah, is a knit yarmulke of thick white yarn, with the Breslov mantra Na Nach Nachma Nachman Me-Uman knitted in blue or black around the circumference. It is a kabbalistic reference to the founder of the Hasidic Breslov movement, Rebbe Nachman, and his burial place in Uman, Ukraine. The Breslov yarmulke is worn by Na Nachs, a subgroup within the Breslov sect that places an emphasis on joy and music. 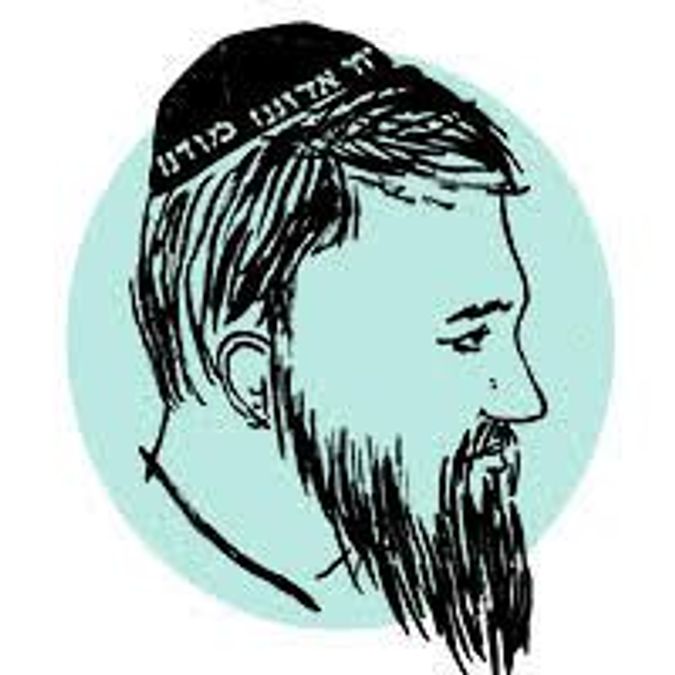 The Chabad-Lubavitch Meshichist Kippah is a terylene black cloth yarmulke with the messianic slogan “Yechi Adonenu Morenu Ve-rabbenu Melech Ha-mashiach Le-olam Va-ed” (“Long Live Our Master, Teacher and Rabbi, King Messiah, Forever and Ever”) written around the circumference in white puffy paint. The kippah expresses the wearer’s belief that the Lubavitcher rebbe Menachem Mendel Schneerson is the long-awaited Messiah. 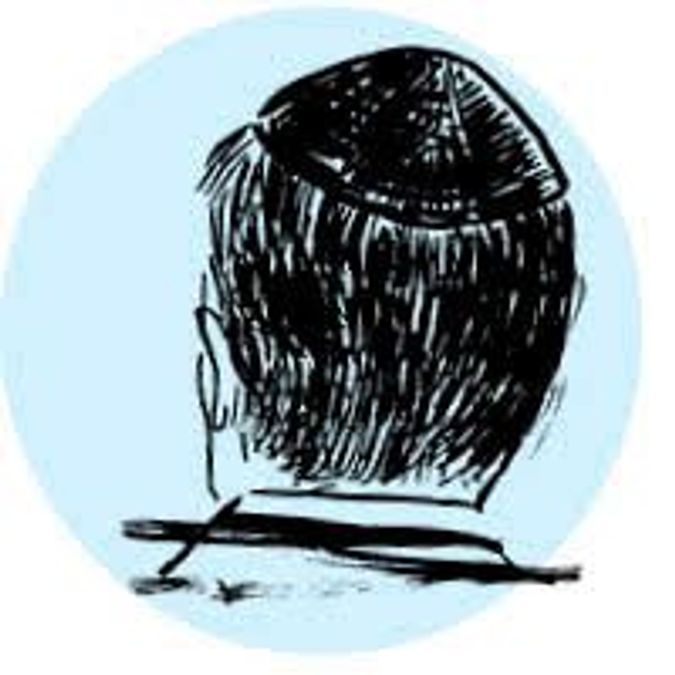 A terylene yarmulke is a four- or six-piece black terylene cloth yarmulke. It is worn by Litvish males for comfort, as the material is lighter than velvet, and is still considered socially acceptable. Many Hasidim of the Chabad-Lubavitch and Gerer sects wear terylene yarmulkes, too. 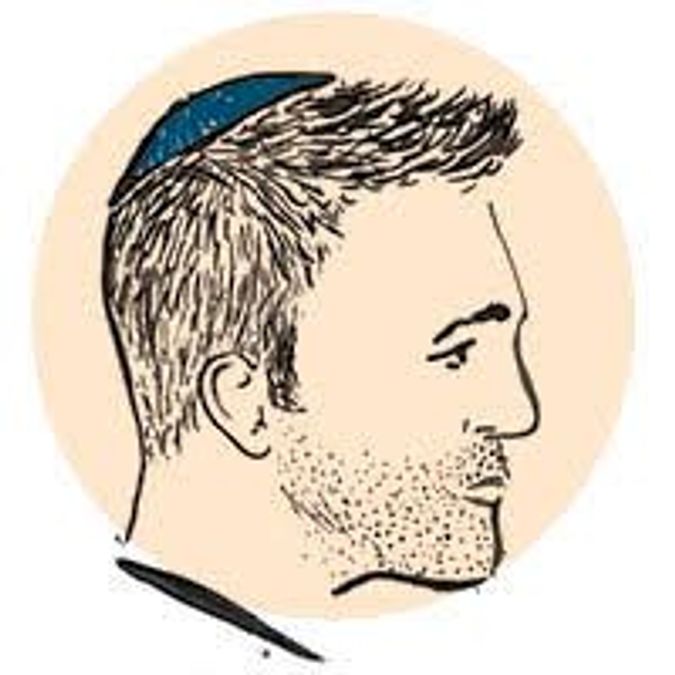 The suede yarmulke is a four-piece yarmulke made of soft suede material. Suede yarmulkes are flat and significantly smaller than other four-slice yarmulkes, and come in different colors and sizes. Typically worn with hair clips over styled hair, they are popular among Modern Orthodox Jews, and, to a lesser degree, among the modern Litvish and the self-identified modern Hasidim. 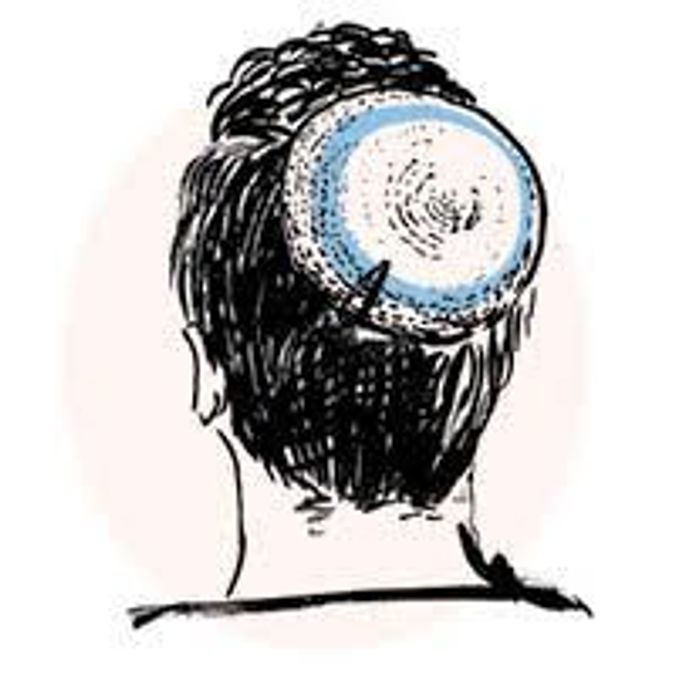 The kippah sruga is a knit yarmulke that is referred to by its Israeli name in part due to its ubiquitousness among Israeli Orthodox Jews. This yarmulke has no “slices,” but is flat and made of thin yarn. It comes in many colors and sizes. Right-wing Modern Orthodox men typically wear kippahs srugas in black, or in white with a colored band. The colored kippah srugas that are smaller in size can be seen on mainstream and Modern Orthodox Jews. 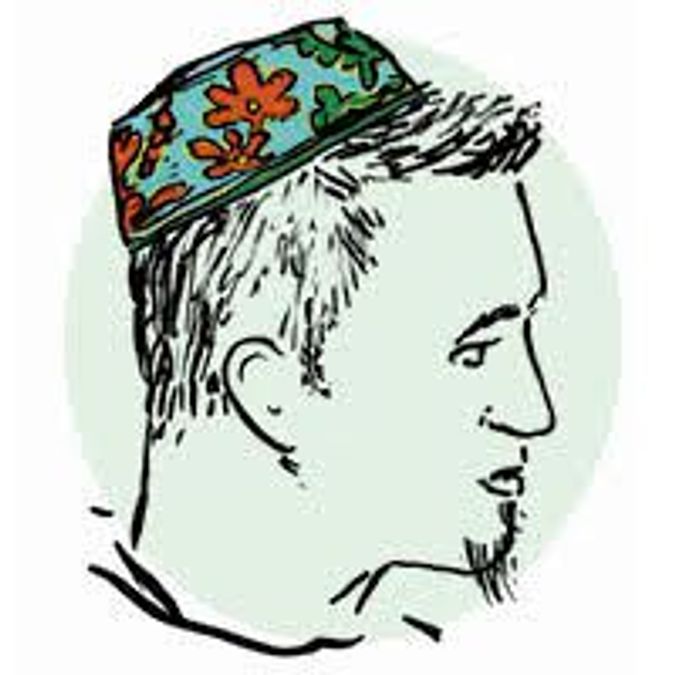 These big, brightly colored embroidered yarmulkes are traditional among Bukharian Jews, originally from Central Asia. Larger than a kippah sruga, they are also worn by Jews who like the look and don’t feel constrained by cultural expectations. They are especially popular among boys. 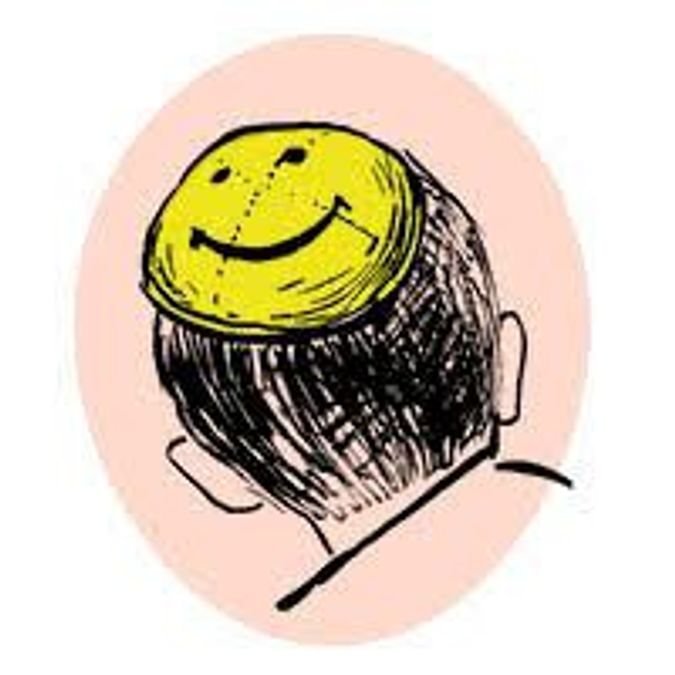 Arguably the most fun and varied category, character yarmulkes can be made of cloth, suede or knit, can be cut in four or six slices or none at all, and have imprinted or puff-painted images of child-friendly themes — from cartoon characters to sports team names. These yarmulkes can be seen on young and adolescent boys — and occasionally on adult men — in Modern Orthodox communities as well as in some mainstream Orthodox communities across America. 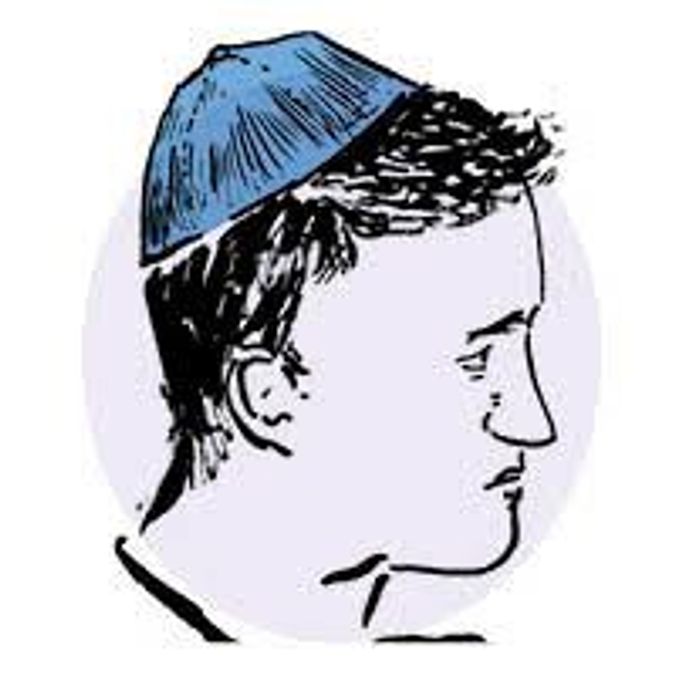 Image by Illustrations by Kurt Hoffman

This yarmulke is made of satin material and comes in four or six “slices.” The satin kippah is seen among Orthodox boys and men only occasionally, but it is very popular among Conservative and Reform Jews who wear yarmulkes in shul and at special occasions, such as weddings. This is the yarmulke equivalent of a doily, a piece of cloth women use in synagogue to cover their hair.