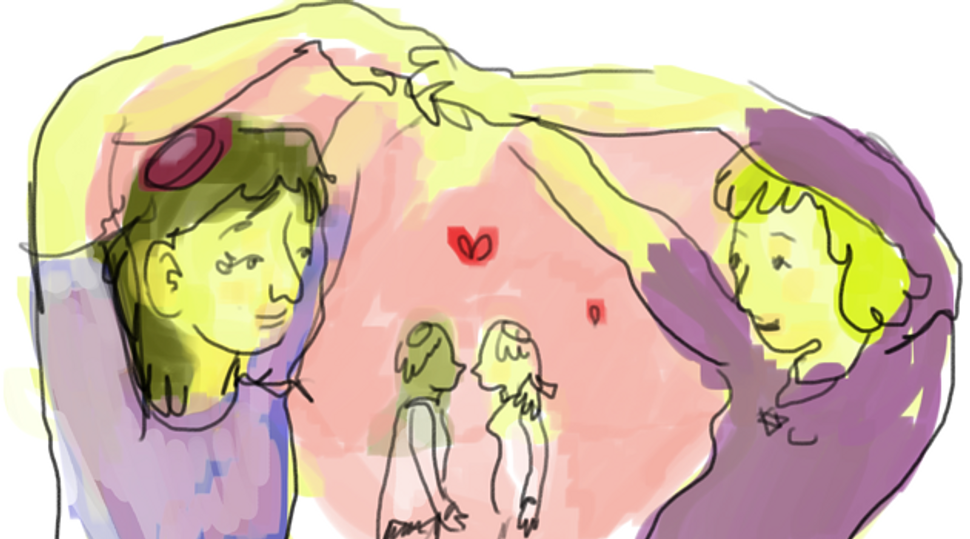 In a recent piece on The Sisterhood, J.E. Reich writes that there is a lack of safe spaces for queer Jewish women particularly in New York City. She attributes this to silence of the mainstream community to create space for us. I disagree with the idea that we need Jewish organizations to open the door to us.

We need to open our own doors.

Reich makes the point that the mainstream Jewish organization are in need of better tools and resources for LGBTQ inclusion. I don’t believe that change will happen even with the best toolbox. If you want to feel included in an organization, you have to join it. Queer Jewish women need to show up and keep showing up. We can’t wait for the doors to be opened, we have to go out and open them.

When I first walked into my Conservative synagogue a few years ago, I was terrified I would not be accepted. I worried my lack of traditional feminine dress would turn people off.  But it didn’t and as I kept showing up week after week, I made friends, joined committees and enrolled my child in the religious school. They accepted me, just as I am. Now even with my buzz cut and wingtips, I am not only welcomed, I welcome others as a greeter.   After reading Reich’s article, I am glad that I live in Washington, DC, where we have a rich and thriving queer Jewish community. Five years ago, I became the director of the Nice Jewish Girls, a decade old independent social group exclusively for lesbians, bisexual and transgender Jews. I took over from the group’s founder, Denise Gold, who started with nothing more than an idea and a yahoo listserv. Reich suggests that the reason Jewish lesbians don’t start our own groups is a “silence” from the mainstream Jewish community. Denise did not ask for permission to create the Nice Jewish Girls she took action with with a clear goal in mind.

In a lot of ways our grassroots beginning has been the key to success. Our longevity is because we are independent of a maternal organization. We have consistently rejected the idea of accepting fiscal sponsorship or becoming part of a larger foundation. We are not a 503 (c), we don’t have a budget, a paid staff, or office space. We cherish our independence and would not cede that ground to an external board of directors.      Reich also refers to the “invisibility” of the mainstream Jewish world towards the queer community and its failure to fully embrace us.  But my experience has been completely different. NJG undertook a project last year, to bring mainstream Jewish groups to the DC Pride festival. The response was overwhelming. In the end we had more synagogues and non-profits who wanted to come than space available.

I recently spoke to Idit Klein, Executive Director at Keshet, about how receptive the Jewish mainstream community is to LGBTQ social programming. “When we first started doing this work in the early 2000s, it was exceedingly rare for a mainstream Jewish institutions to be interested in cosponsoring a queer Shabbat or supporting any kind of social event exclusively for LGBTQ Jews.” But now, “There are many LGBTQ community events that mainstream Jewish institutions are glad to cosponsor with us.”   While I appreciate Reich’s point of view, creating a community does not come from permission, it comes from action. Now is the time to create a social group where you live. Gather your Jewish lesbian friends and make a standing dinner or happy hour. It is the little acts of connection that make a visible thriving community.

And if Reich is still looking for a nice Jewish girl, I can totally hook her up here in DC .