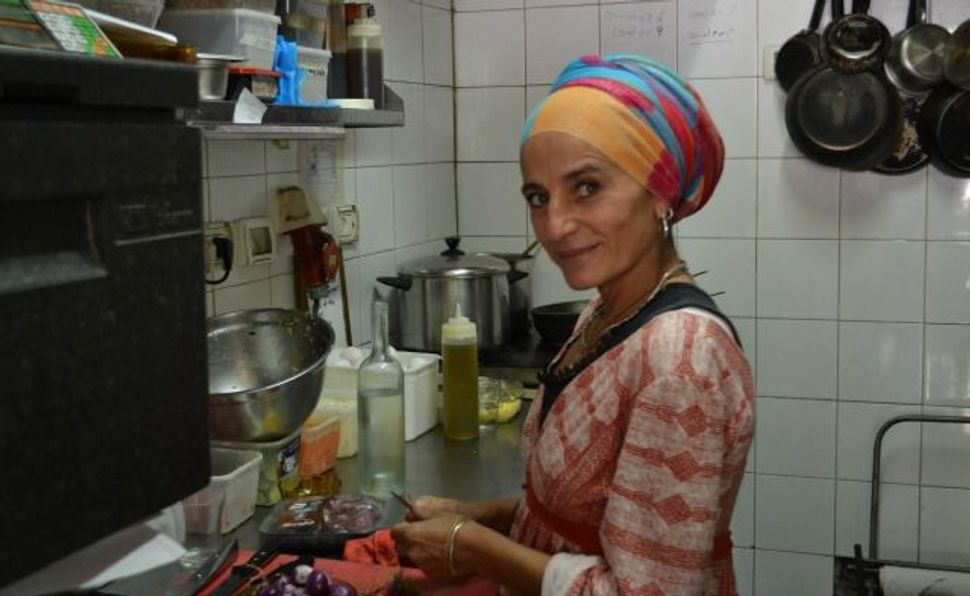 Jewish women have always had a strong role in the kitchen, in fact one could say that the kitchen was their domain, but this has not always been recognized in the professional sphere. Until recently, women could not serve as mashgichot [kashrut supervisors] under the Rabbinate in Israel. Over the past few years, however, this has begun to change.

I first met Hemda Shalom in a program meant to help women open their own culinary businesses. The program was a social incubator of sorts — the idea being that for many women, cooking is something that can be monetized even in the absence of other professional skills. Quick to laugh, Hemda is a tall, stately woman. She always has glint in her eye; she’s always cooking up some scheme, eager and ready to start on a new adventure. She was finishing the program as I was starting, so we did not know each other well, but it’s hard to be around her and not be caught up in her contagious energy. About a month ago, I ran into her again in the Machne Yehuda Market. When I asked her what she was doing with herself nowadays, she replied that she was working as kashrut supervisor. My interest was immediately piqued. So last week, I sat down to talk to her about working as a female kashrut supervisor and the alternative kashrut organization she works for.

Kashrut certification in Israel is a function of the rabbinate. Up until about a year ago, the rabbinate, and hence Israeli law, would not allow women to serve as kashrut supervisors. That changed when a group of women, Hemda included, finished a course on kashrut supervision run by the women’s organization Emunah. They asked the rabbinate to be allowed to sit for the certifying exam. The rabbinate refused. The women sued. They won. Eleven women took the exam. Eleven women passed. Only two are currently working as kashrut supervisors. The rabbinate won’t hire them, but Rabbi Aaron Leibowitz will. Rabbi Aaron Leibowitz runs a private, alternative kashrut organization called Hashgacha Pratit. The idea of the organization is to provide kashrut supervision that works hand-in-hand with restaurant and business owners. Keeping a restaurant kosher is viewed as a partnership, something to be done together. As of now there are eleven Jerusalem businesses that use Hashgacha Pratit and the organization is also considering expanding to Tel Aviv. Hemda and her colleague Avivit are currently the only two supervisors working for the organization.

Both Hemda and I came to our reservations with the rabbinate during our time working in a community kitchen as a part of the aforementioned program. Hemda was frustrated with the fact that women had it so hard because private kitchens could not be supervised by the rabbinate. I became frustrated because I witnessed how very little the supervisor actually did. Hemda, unlike me, however, decided to do something about it. She signed up for the Emunah course in the hope that she could change the system. She was unable to change the system in the particular way she had hoped — she, and the Rabbinate will still not provide supervision for private homes — but she is changing it in other ways.

It’s not an issue of principle, Hemda says, for women to serve as kashrut supervisors, it’s just right. After all, who knows the kitchen better than women? The Emunah course was rigorous and eye-opening. It changed the way Hemda thought about kashrut and religion. It gave a context for the things she already did. But the things she already did, she learned from her mother. She already knows how to kasher a kitchen for Pesach, how to sift through grains of rice, looking for bugs, but now she knows why she does it and she can use that knowledge in her professional life. She tells me about Aliza Hochstead, who served as a kashrut supervisor in the settlement of Efrat, and who, at age 16, was already helping her local bakery in Cleveland “separate challah,” the ritual wherein a portion of dough is removed and burned after it has been blessed. For these women kashrut in the kitchen came naturally. In a way, this is a way of taking “women’s work” and monetizing it, turning into another place where women can succeed and lead.

But it’s not only about religion. To get a wider perspective on Hashgacha Pratit and its supervisors, I spoke with Itzik Hai Yaakov, the owner and chef at Itzik’s Place, a small cafe supervised by Hashgacha Pratit. Like me, Itzik had become disillusioned with the fact that he was paying the Rabbinate to provide a service he felt he was not getting. He wanted something more. He got it in Hashgacha Pratit. For him, having female supervisors was a matter of principle — a way to push back against what he considers a chauvinistic and old-fashioned system. But when I asked him whether he thinks having women working in the kitchen as supervisors will also help promote women in the male-dominated realm of professional kitchens in general, he was hesitant. He believes that the main barrier for women is the intense physical aspects of professional cooking. It’s hard physical labor. I am not so sure.

For Hemda, at least, her work as a supervisor is another way in. She loves taking home tips and tricks that she encounters in the course of her work. She loves seeing what the cooks and chefs are doing and then tries to make it her own. There is magic and mystery in how two people can take the same ingredients, the same instructions, and come out with such entirely different dishes. She is enamored with that. And she does the physical work as well. She sifts, she washes, she scrubs and boils where she needs to. Even Itzik admits that if Avivit or Hemda are in his kitchen and he needs an extra hand they will gladly lend theirs to help him. Hemda has not yet found a way to make it easier for women who don’t have access to professional kitchens to succeed, but she has found a way to make professional kitchen more accessible to women.

Here is a place where religion, food and feminism meet. Looking in from the outside, it seems so obvious. If for so many years a woman’s place has been in the kitchen, why shouldn’t she take those skills, both culinary and ritual and use them to gain access to fields that have heretofore been inaccessible? What could be more traditional and more radical?

Hemda would probably not consider herself a feminist, but at the end of our conversation she says, “Women need to be in every field. They need to been in dayanut [religious arbitration]. They are already religious advocates. If women were in charge, we would have had peace a long time ago.”

I think my great-grandmother would probably have agreed.