Pulpit Plus One: Being ‘Present and Pleasant’ 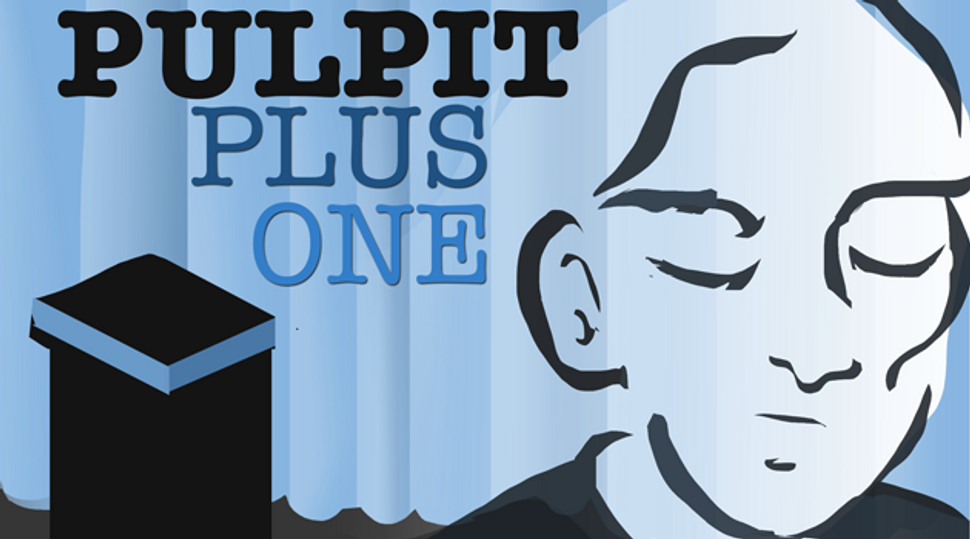 “Pulpit Plus One: The Secret Lives of Rabbis’ Husbands, Partners, and Wives” features the voices and experiences of the partners of pulpit rabbis. In these series of interviews, “Pulpit Plus One” takes an honest and lively look into the nuances of a complex role.

Dana works as a consultant to non-profit organizations. She lives on the West Coast with her husband Adam and their son. Adam is the assistant rabbi at a seven-hundred-family Conservative synagogue.

How have you felt being the partner of a pulpit rabbi?

My feelings have been a mix. At the core of it (and this sounds cheesy) I think the Jewish people are better off with Adam as a rabbi. It’s been challenging in a variety of ways, but I feel like this is what he’s meant to do: serving in this type of role, leading the Jewish people, being a visionary — this is right for him. This wasn’t something he just did because he was on a particular path; it was something he really chose to do. So overall, I’m very proud of him.

I think one of the biggest challenges for us has been that I grew up Reform. I was very actively Jewish — I was active in youth group, we had Shabbat dinners as a family Friday night. I knew I wanted to marry a Jewish person. But he is a Conservative rabbi, and so that has meant some significant lifestyle changes for me.

What was his job search like for you? I know it was a little while ago.

[chuckles] It was an interesting time for us. I was pregnant — we have an almost-four-year-old — and I think what really illustrates what that time was like is that we barely talked about the fact that we were about to have a child! Every conversation that we had, that fall and into spring, was about jobs: where were we going to live, and what kind of job was Adam going to get…it was a lot of discussion and analysis.

I’m curious to hear a bit about the expectations around you and your role. Are there any explicitly stated expectations, and what are the implicit expectations of your responsibilities?

There are zero explicit expectations. I like to say that the implicit expectations are that I be “present and pleasant,” which is a phrase I picked up from a friend. They like that I’m there, they love seeing our son, and I need to be pleasant, right?

I assume that we should be hosting people [for a Shabbat meal] more than we do, and it’s this guilt that weighs on me that we don’t. My husband is very protective of his boundaries, and so for him, he’d rather not host congregants on Shabbat who he’s not very close with, because it’s time for us to be together as a family, and to do our own thing.

I still haven’t figured out what the expectation is, and whether I’m disappointing people because of it, or not. It’s possible everyone thinks we’re the rudest people in the world…or maybe they don’t care.

The other thing is we’ve had some issues getting pregnant with our next child. Part of this is my own insecurities, but I feel like everyone is wondering why I’m not pregnant yet. Eli is almost four, and it feels like most people in our community, their kids are eighteen months apart. So I think there is an unspoken expectation where of course the rabbi’s family will have many kids. I feel like I’m going to get pregnant, and everyone’s going to say “Oh, finally!”

You don’t have to answer every point, and we already talked about some of these, but what are a few of the effects that this role has had: on your relationship with your partner, on your own Jewish identity, on your friends and family?

I’m grateful. I think in terms of our relationship — we’re good. [Adam] is very conscious of making sure that family is a priority, and I’m really appreciative. I see how this type of role could put an enormous amount of strain on a family, and we haven’t had to go through that.

The family stuff is challenging, in part because of the difference in observance between my family and us, and then me personally and my husband. My family still struggles to understand what this means for me, and I think part of the issue too is that I struggle with my own understanding of observance. It’s not like I had some sort of religious awakening, where I was like “I should keep Shabbat because that matters to me religiously.” It was more: I want to be with Adam, this is the price of admission, and I’m willing to do it! I can see the benefit, I can see the beauty in it, and I want to do it.

I don’t feel like I’m doing it because it expresses part of my religious identity or belief about halakha [Jewish law]. And then when my family wants to do things on a Saturday, or I have to take a million days off work for all the chagim [holidays]…That’s something that I grapple with, and I think I’d grapple with it less if we were just a regular couple where one member of the couple was more observant than the other. But given the public nature, I don’t feel that I have a choice.

What I do in my own home is one thing, but I’m not going to drive and I’m not going to go shopping. And I’m okay with that, in day-to-day life, but it’s the interactions with my family that can be challenging.

Earlier in our conversation you mentioned the term “rebbetzin.” How do you feel about that title, or others like it?

I think it’s pretty arcane. There’s maybe one congregant who says “Shabbat shalom, Rebbetzin”. He’s a much older man, and it’s sweet, but…to have a title for something that I have done nothing for—it’s very odd to me.

What has been really rewarding as a result of all this?

It goes back to what I said in the very beginning, which is how proud I am of my husband. And I say this knowing he would say that he’s proud of me too — it’s not like I’m just sitting in awe of him; we have a very equal relationship in that way.

Being able to see the person you love most do something that I personally couldn’t do, and very few people could do, and that he is just clearly really talented…there are lots of moments, where I’m like “Oh man, he is so good at this!”

If you have a partner who’s a doctor, you don’t see them in the operating room, right? It is a nice experience to be able to see [that]. He’s barely seen me do my work well, and there’s a challenge related to that: I know much more about everything in his work life than he does about mine — so there’s this weird imbalance there, but I just think that’s a really wonderful experience, to see him shine.

I think everything else, it sort of feels like: it’s good! It’s better than I thought. But that’s the one where I think, ah, this is uniquely special about this role.

Identifying details have been changed to protect anonymity. This interview has also been edited for length.

Pulpit Plus One: Being ‘Present and Pleasant’