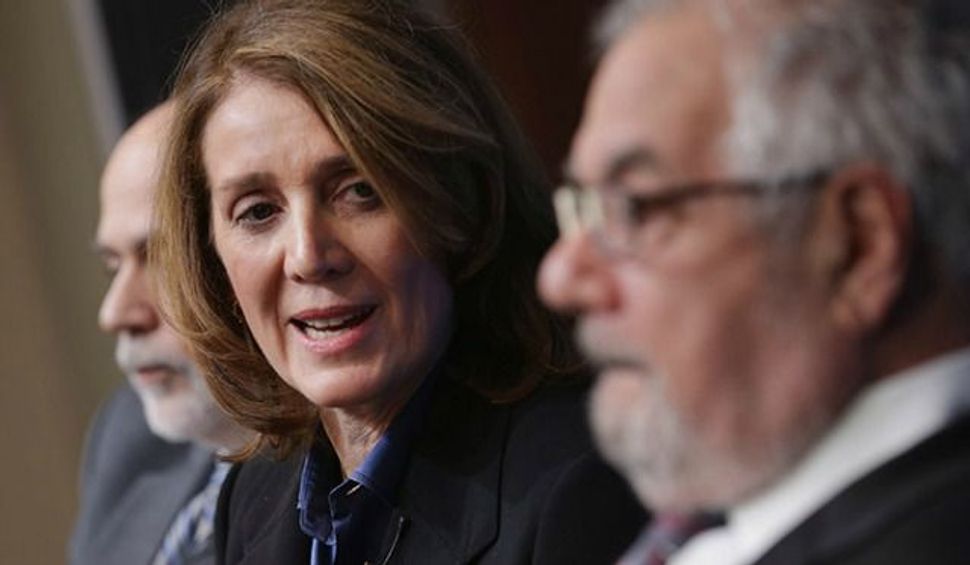 (JTA) — To the business press, the symbolism of Ruth Porat’s move from her position as chief financial officer of Morgan Stanley to her newly announced perch as Google’s CFO of the future couldn’t be more obvious — it represents a shift in power from Wall Street to Silicon Valley. And there’s no question that it’s a big deal when one of the most powerful women in finance decides that the grass — or at least the money — is greener on the other side of the country.

But Porat’s career leap to the Mountain View, Calif., tech giant, starting May 26, also means that she is moving back home to the Bay Area, where she grew up. And a brief look at her family history reveals that the forces that led them to end up in northern California were nothing less than the defining events of 20th century Jewish history: the Holocaust and the founding of the state of Israel. Porat’s father, Dan, was born in 1922 in what is now Ukraine, and he later moved with his family to a shtetl in the Carpathian Mountains and then to Vienna, which is where they lived when the Anschluss of 1938 brought the Nazis to power. In a written memoir archived by the Center for Jewish History, Dan Porat recalls going to watch Hitler ride triumphantly into the Austrian capital. Thanks to his strong grasp of Hebrew learned at cheder, he was able to escape to a kibbutz in British Mandate Palestine; the rest of his family was killed in the Holocaust. Dan Porat volunteered to fight in the British army.

Meanwhile, Ruth Porat’s mother, Frieda, was born during her family’s voyage to Palestine and grew up there. She and Dan married in 1946, and he fought in Israel’s War of Independence. In 1954 they moved to England, where Ruth was born, so Dan could pursue his graduate studies in physics. Unwilling to live in England as a non-citizen, and fearing that Israel was too dangerous for his family, Dan obtained a joint appointment at Harvard and MIT and moved the family to Boston when Ruth was 2. However, the climate did not agree with Frieda.

“Frieda wanted to move back to Israel because she could not physically tolerate the New England climate,” Dan Porat wrote in his memoir. “I saw her suffer in the cold she was not used to and promised to bring her to a climate close to that of Israel.” In 1962, the Porats moved to Portola Valley, Calif., and Dan Porat went to work for the physics design team at the Stanford Linear Accelerator Center. Frieda, in turn, pursued a career as a psychologist and organizational consultant, founding the Center for Creativity and Growth and writing several books, including “Creative Procrastination,” “Creative Life Management” and “Creative Retirement.” She died in 2012.

Ruth Porat attended Stanford University as an undergraduate, as did her two siblings, and currently serves as the vice-chair of the university’s board of trustees. She has worked at Morgan Stanley since 1987, with one interruption, and during the 1990s she was co-head of the firm’s technology investment banking group. A major Democratic donor, she was considered a potential candidate for deputy Treasury secretary in 2013, but she withdrew her name from consideration.

In 2014, Porat and her husband, Anthony Paduano, established a post-doctoral fellowship in her father’s name for the study of physics at Stanford, honoring his dogged and ultimately successful efforts over the years to complete his education, even taking correspondence courses while he served in the British army during World War II.

While Porat may bring a wealth of experience from Wall Street to one of the world’s richest companies, her father has expressed the hope that his children will never be motivated by money alone.

“One of the dangers of our times is materialism that leaves the soul empty and creates an illusion whereby higher consumption is equated with a better life,” Dan Porat, now 91, wrote in his memoir. “I hope my children and their children will not fall prey to this way of thinking.”