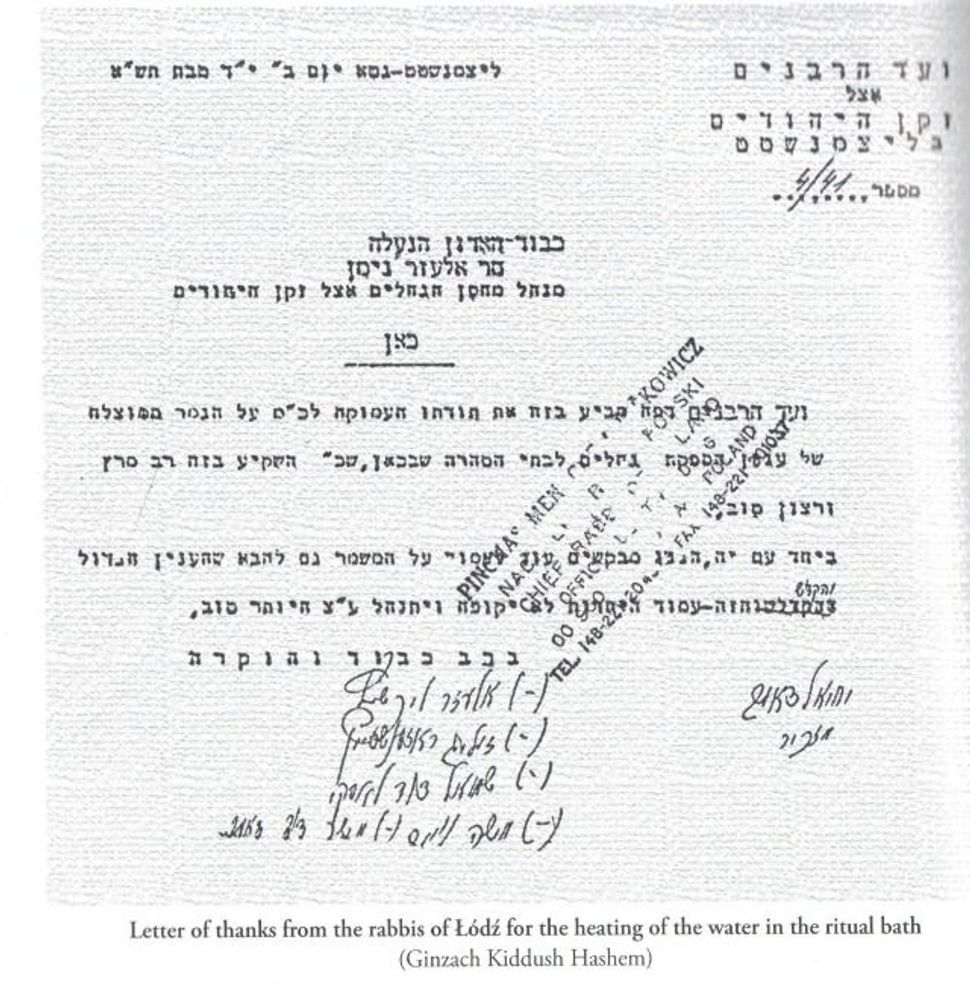 This piece was written by and shared with permission from the .

Throughout history, the mikveh has stood at the very core of religious Jewish life and practice, and said to protect the Jewish people both physically and spiritually. It is therefore fitting on the eve of Holocaust Remembrance Day, to explore some of the discourse surrounding mikveh during the Holocaust, when Jewish existence was threatened in both these realms. Though this piece is not an exhaustive examination of the topic, it is meant to join the conversation in an attempt to pay respect to those who endured the suffering and thereby fought for the physical and spiritual survival of our nation.

Letter of Thanks from the Lodz rabbis for heating the mikveh waters.

The Nazis understood the importance of the mikveh. Rabbinic responsa record that in many places, specifically in the ghettos, the Nazis banned the use of the mikveh and closed them down. They prevented Jews from immersing for any reason, and thereby largely prevented women from keeping the laws connected to family purity. This raised serious questions regarding the propriety of a halakhic marriage. In the Oneg Shabbat Archives, which chronicled the lives of Jewish people in the Warsaw Ghetto, Rabbi Yehoshua Moshe Aronson notes that after the Nazi invasion, the mikvehs were closed in the Warsaw Ghetto. This led him and others to worry that “the consecration of married life would be marred by impurity.”

Likewise, in the Slobodka ghetto, Rabbi Avraham Dov-Ber Shapiro, the chief rabbi of Kovno, struggled over whether to allow marriages, because of the difficulty of observing the laws of family purity in the ghetto. However, when a rumor that single women could be selected for deportation from the ghetto began to circulate, many women sought civil marriages to prevent deportation. Rabbi Shapiro thus decided to perform halakhic weddings, even without mikveh, for “pikuach nefesh” (the Jewish obligation to save a life) reasons.

Another halakhic authority Rabbi Shimon Huberband, wrote in his responsa (preserved in the Oneg Shabbat Archives), “Jewish Warsaw was left without any mikvehs, and the problem of the purity of the daughters of Israel became as serious as it was in the days of the ancient Roman edicts against Judaism.” Anyone who used the mikveh would face the punishment of anywhere from ten years of imprisonment to death.

Evidence suggests that the Nazis understood the mikveh to be something that separated the Jews, elevated their sexuality, and set them apart from others. Much like they desecrated Torah scrolls, using their sacred parchment to make shoes, they used the mikveh, and the purity it symbolized, to taunt and degrade the Jewish people. The Nazis even went so far as to desecrate and defile people in the mikveh itself, as a symbol for the undoing of the Jewish people’s sanctity and lauding their abasement. Chaim Kaplan, who lived in the Warsaw Ghetto, noted in his diary on May 14, 1942:

This week they have invented a new torture. Whoever hears of it doubts its veracity, yet this has happened — First they captured a few dozen young and beautiful women and transported them to a certain Jewish ritual bathhouse; afterward they captured some strong, powerful, virile men and brought them to the same bathhouse. Both sexes were forced by means of intimidation and whiplashes to remove their clothes and remain naked; afterward they were made to get into one bath together and were forced into lewd and obscene acts

The Nazis explicitly overturned the symbolism of the mikveh, and turned it into a source for humiliation and degradation. Kaplan’s account continues with the Nazi’s stated aims: “Henceforward, all the world will know how low the Jews have fallen in their morals, that modesty between the sexes has ceased among them.” While the Nazis attempted to undermine or prevent use of the mikveh, it is interesting that many women, and even some communities, attempted to remain steadfast to its observance. Rabbi Huberband discusses how women in the Warsaw Ghetto risked their lives going to nearby towns to immerse in the river or to use secret ritual baths. This was all the more difficult (and heroic) since there was a restrictive curfew in effect, as well as restrictions on transportation. In the Lodz Ghetto, the mikveh was left under the auspices of the rabbinical board of the Judenrat. They made the mikveh a priority, even working to supply coal to heat the water. Various other ghettos were able to rebuild their mikvehs after they were destroyed by the Nazis, and retained their mikveh until the communities were deported.

The incredible resilience of the Jewish people is made particularly eminent in the lengths they traveled to preserve the laws of family purity during the period of the Holocaust. On the 27th of Nisan, the Jewish people commemorate “Yom Hazikaron L’Shoah U’le-Gevurah.” The addition of gevurah [strength] to the name of the day is meant to emphasize the strength of the Jewish people during the Holocaust, to remember them not as victims but as heroes. The women willing to risk their lives to keep these laws should inspire us; they are reminders of the importance women of all generations placed in the mikveh, and how it continues to bind us to our roots, especially during the most challenging times.

This post originally appeared on the Eden Center blog